The Church of Our Lady of Kazan

The Russian village of Yaropolets is home to the ruins of an Orthodox church that was erected at the end of the 18th century and dedicated to the Virgin Mary. This village is located about 80 miles from Moscow, the capital of Russia.

The former church can be found on the abandoned estate of Count Zakhar Chernyshev, a famous military leader during the Seven Years War. Chernyshev ordered the construction of an Orthodox church in the 1770s. This feature was to be incorporated into his pre-existing palace and park, which were built between 1760-1770. The main part of Chernyshev’s estate was built in the early classicism style with baroque elements. The manor was so splendid that when Catherine II visited in 1775, she said that if the estate were closer to Moscow, she would have chosen it as a country residence for herself.

The entranceway was a gate with high towers in the style of early Russian romanticism. The site chosen for the new church was opposite these gates, and construction began in 1780. The original architect of The Church of Our Lady of Kazan is still unknown. However, over the years there have been theories about who it might be, but what is agreed upon is that the design is most unusual and came from Chernyshev himself.

The layout has two symmetrical sections connected by a central vestibule. This is not typical for Russian Orthodox churches.

Drawings of the facade and plan for the Lady of Kazan Church, public domain.

It was envisaged that the church would be not only a place of worship but also the family tomb of the Chernyshevs. Therefore, the eastern section was the church itself, while the western part held the family tombs.

Unfortunately, Field Marshal Zakhar Chernyshev never saw his vision come to fruition as he passed away in 1784 before the project was completed. After that, his wife Anna Rodionovna had to take over the construction of the church. When the unfinished church partially collapsed in 1787, Anna decided to approach the famous architect KI Blank. She did so with the help of a family friend, Prince Alexander Mikhailovich Golitsyn, a Russian envoy to Great Britain.

Under Golitsyn’s direction, Blank managed to restore the walls and vaults of the temple. He then began work on the interior decoration, which was never completed, possibly due to Blank’s subsequent illness. Finally, consecration of the church took place in 1798. The main altar was consecrated to Our Lady of Kazan, while two side altars were dedicated to the prophet Zechariah and Saint Anne, the grandmother of Jesus.

It took so long to complete the church because Golitsyn had to supervise the project from Moscow, including consulting with the foreman and dealing with any problems that arose. In addition, Anna herself rarely visited the estate and was often on pilgrimages, making communicating with her very difficult. Even after consecration, work was still ongoing until 1839, possibly because a fire in 1830 caused some damage. In 1907, Metlakh tiles were laid on the floors of both the church and the tomb. Sketches for how the interior should be decorated were provided by VI Bazhenov, a friend of the family.

The facades were decorated in the Ionic style while the overall design was inspired by early Classicism with late-Baroque and Rococo elements.

The All-Seeing Eye, considered a symbol of freemasonry, is depicted above the entrance to the church. When combined with the church’s unusual appearance, this feature has given rise to rumors that this building is actually a Masonic temple.

However, architects who have researched this period deny such a connection, stating that the All-Seeing Eye was often used in the design of Orthodox churches constructed in the Baroque and Classic styles.

During the Soviet period, the estate was subjected to looting and natural destruction. Nevertheless, when compared to the rest of the manor, the church is better preserved.

During the First and Second World Wars, the buildings were badly damaged. A shell even burst through the church roof, but the building managed to survive. After the war ended, the church was transferred to the parish and functioned until 1966, when the last abbot passed away.

Left abandoned, the church began to fall into disrepair through lack of funds. The plasterwork swiftly rotted and fell off, and nature began to take over. In the early 1970s, the supporting columns of the temple were replaced and the roof repaired. It was around this time that a portrait of Chernyshev, the altar canopy, and parts of the iconostasis disappeared.

In 2016, private donations enabled emergency work to be undertaken on the church. Part of the roof was replaced again, which prevented the elements further eroding what stucco remained inside the church. 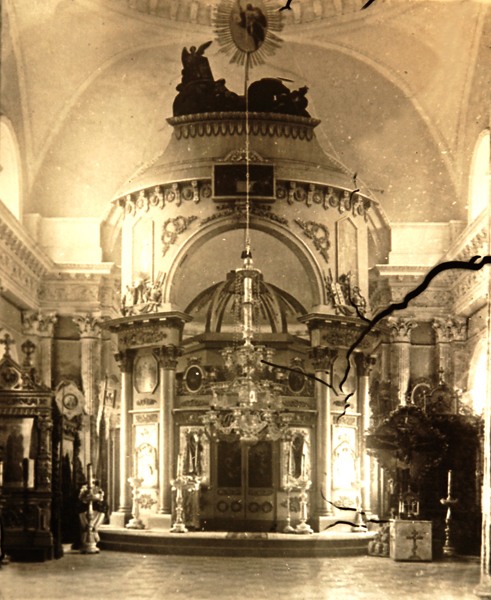 Picture of the iconostasis in Our Lady of Kazan Church. Public domain.

Today, the Moscow regional branch of the All-Russian Society for the Protection of Historical and Cultural Monuments was responsible for the conservation of the Church of Our Lady of Kazan. The restoration work was carried out by a charitable organization known as the Rural Church Center.

Currently, all work has been suspended since 2018 due to lack of funding, but fundraising is still ongoing. Those visiting the church may note the remains of a bell tower standing behind it. Made of red brick, the tower’s style doesn’t seem to match that used for the rest of the church, and that is because this is the third bell tower to be constructed. During Soviet times, the top of the bell tower was knocked down and a concrete water tank was added.

Photos of this amazing church were taken by Galina Kochergina. She is a photographer, and you can find more of her beautiful work in her LiveJournal account. Another Article From Us: The Lost Village of Haywood in Scotland