The city of Toronto and its citizens have always had a great cinema culture. The Toronto Film Festival is considered one of the most prestigious in the world. However, as with any city, over the decades, things have changed and some cinemas make room for new and improved ones.

This article will review three cinemas that we consider to have had a huge importance in the formation of Toronto’s film culture.

At the time when it opened, in 1914, Shea’s Hippodrome was Canada’s largest movie palace with a capacity of 3,200 seats, and also one of the biggest vaudeville venues in the world. It had 12 opera boxes, a full-size orchestra pit, and a Wurlitzer organ.

It occupied the corner of Queen and Nathan Phillips Square (then called Bay), just across from the Old City Hall. The building was commissioned by the Jerry and Michael Shea brothers, entrepreneurs who had already built and ran two other theaters, Shea’s Yonge Street and Shea’s Victoria. But the Hippodrome was their most ambitious project. 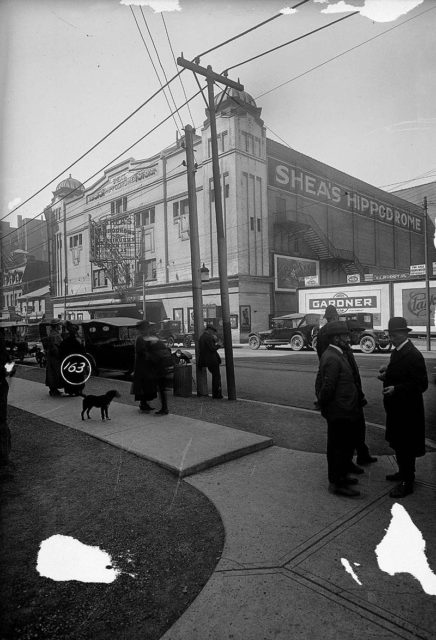 The name of Shea’s, Hippodrome was inspired by the large circular theaters in ancient Greece, and the theater’s interiors were designed in gorgeous renaissance style, with curved ceilings and allegorical paintings. In 1924, Shea’s screened their first sound film, which at the time was still considered a novelty. But as years went on, and vaudeville theater was in a steady decline, the “talkies” became their main source of income. 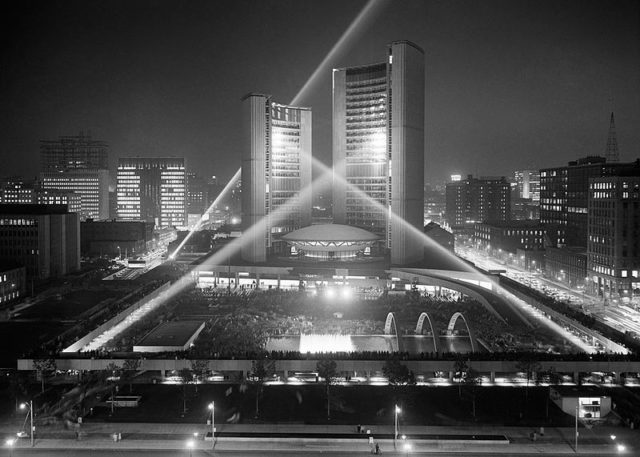 After World War II, Shea’s Hippodrome was one of the last operational theaters, not just in Toronto, but in all of North America. However, in 1957, just after Christmas, the theater suddenly closed, and sometime later in the year, it was demolished to make room for the construction of the new Toronto City Hall.

Located at 677 Bloor Street, the Metro Theatre was one of a few theaters that architects Kaplan and Sprachman constructed in Art Deco style in 1930s Toronto. The Metro opened in 1939, and for a while, it functioned as sort of a neighborhood theater, showing, almost exclusively, B movies and reruns. 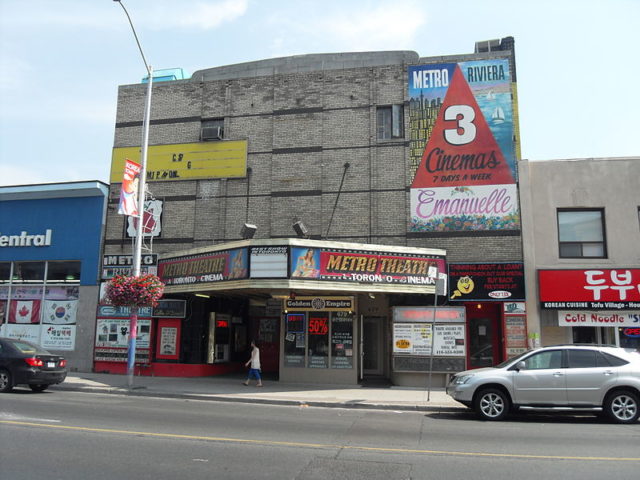 But it all came to an end in August 2013, when the Metro was bought by a numbered company for  $2.9 million, and the theater was shut down.

Before it was closed, in 1986, the University Theatre was considered to be the biggest and most prestigious movie house in Canada.  And for several decades, this single cinema was truly the prime choice for many avid movie goers. It hosted regular gala movie premieres for major Hollywood productions, European art house films, played a pivotal role in introducing Toronto to the CinemaScope and 70 mm movie projections, and it was also where the Toronto International Film Festival took place. 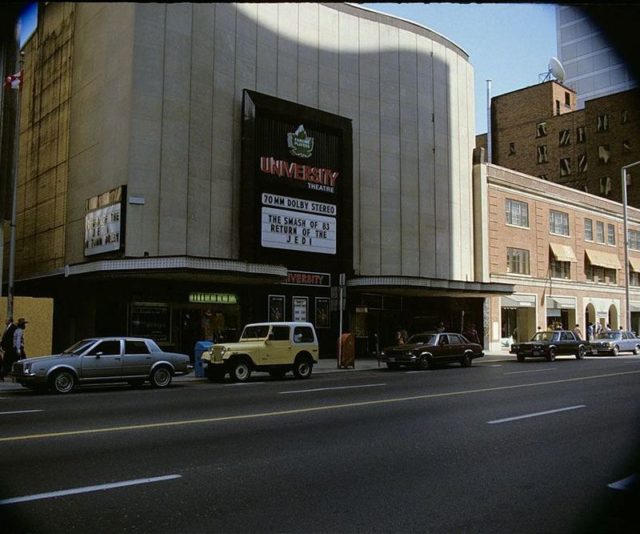 Return of the Jedi showing at the University Theatre, with the marquee stating “The Smash of 83”. Author: Ellis Wiley. CC BY 2.0

University Theatre was launched in 1949, with a showing of Joan of Arc starring Ingrid Bergman. And for 36 years, this film palace dedicated itself completely to intoxicating the Toronto audience with movie magic. But, sadly, after the 1986 Toronto Film Festival wrapped, the theater was closed and scheduled for demolition. The plans for the building’s demolition had even been announced 5 years before, in 1981. But even the numerous efforts of citizens, then-mayor Art Eggleton, and local city councilor Ron Kanter were not enough to save the cinema. 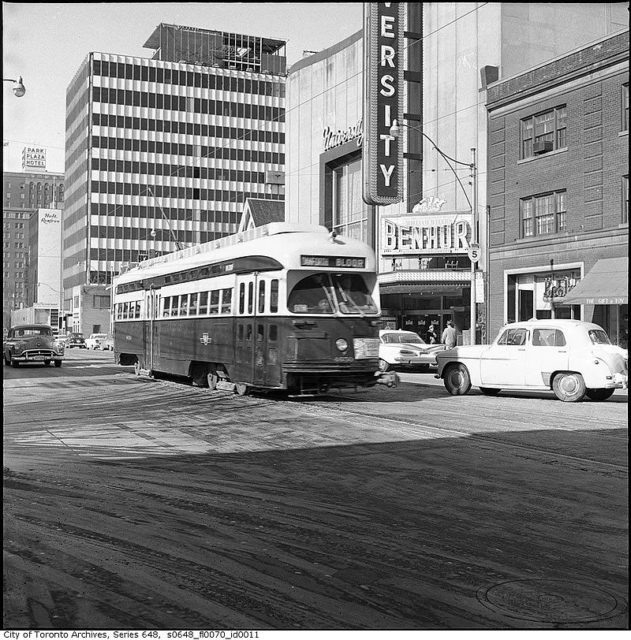 However, before the building was torn down, they come to an agreement with owner Famous Players for at least the unique front wall facade to be preserved. It was speculated that the reason behind University Theater’s demise was that the single screen cinemas could no longer compete with the new multiplex. The owners of the theater believed the land would be worth a lot of money because of the building’s exclusive location.

Sadly for them, the 1980s saw a complete collapse of the property market. And for over a decade, the facade, with only a scaffold at the rear to support it, was left to deteriorate, with no plans for redevelopment whatsoever. 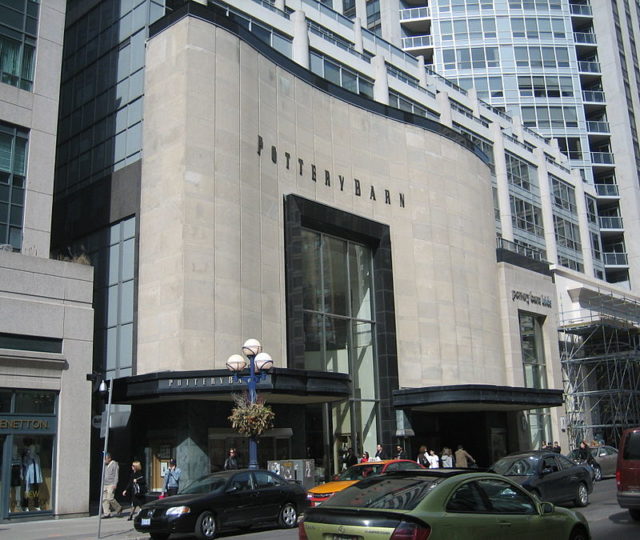 Then, in the late 1990s, with the revival of the property market, new development plans for the site were proposed. Because the facade was now in such a poor shape, it was decided that it needed to be pulled down. The first plan called for a construction of an entirely new nine-screen cinema, which was never realized.

Today, the newly constructed building houses a Pottery Barn, a homeware and furniture chain. Luckily, the gorgeous facade of the cinema was accurately reproduced, to at least serve as a reminder of where the greatest movie palace in Toronto once stood.

« Winchester Mystery House – Home To The Spirits Of Those Killed With Winchester Rifles
The biggest mall in the world is empty: the South China Mall »