Church of St Luke, Liverpool – The Aftermath of the Liverpool Blitz

It once served as a former Anglican parish church. With faith in its religion, it stood proudly on the corner of Berry Street and Leece Street, meticulously overlooking down the length of Bold Street, Liverpool, Merseyside, England.

The Church of St. Luke was built between 1811 and 1832 using the design of John Foster Sr. and John Foster Jr., a father and son both successful surveyors of the municipal Corporation of Liverpool. It was built with a precision of a watchmaker, carefully crafting every centimeter, resulting in an acoustic church perfect for its use even as a concert hall. 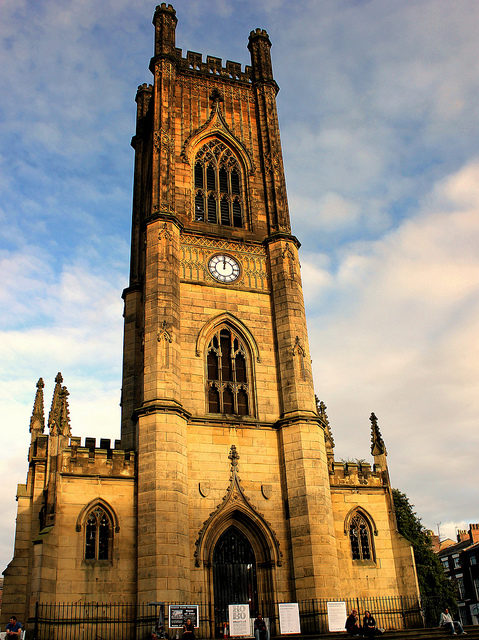 Some centuries back in 1791, Lord Derby presented the city of Liverpool with a gift in a form of a piece of land, clearly stating that its purpose was to build a church upon it. Even though the plans for this religious structure were laid in 1802, the foundation stone wasn’t set in the ground until 1811.

And so Foster the senior began with the mission of gifting Liverpool with a church. Progress was made slowly but this allowed John Foster to amend the plans to incorporate his idea that the church should also serve as a concert hall, besides its already given intent as a parish church and ceremonial place of worship for members of the Corporation of Liverpool. 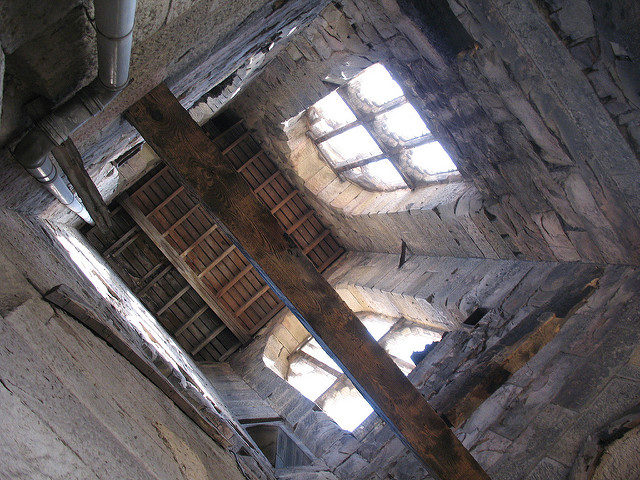 During the process of construction, in 1822, the church was given the addition of a chancel. John Foster Sr. decided in 1827 that it was time for his son to take over the role of Corporation surveyor and to follow in his father’s footsteps down the road of architecture design, and in the words of the Bible “And it was so”. 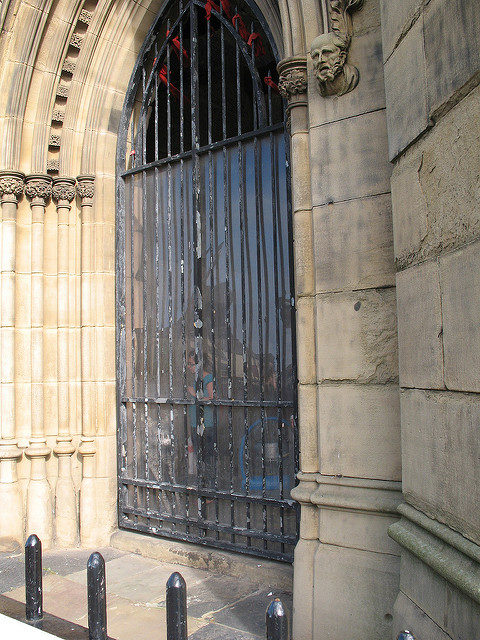 Continuing where his father stopped, Foster the junior finished the church in 1832, after 21 years in the making. The Church’s location made this holy structure to be locally known as the ‘Doctor’s church’ due to its location near Rodney Street, home to many doctors in those days. 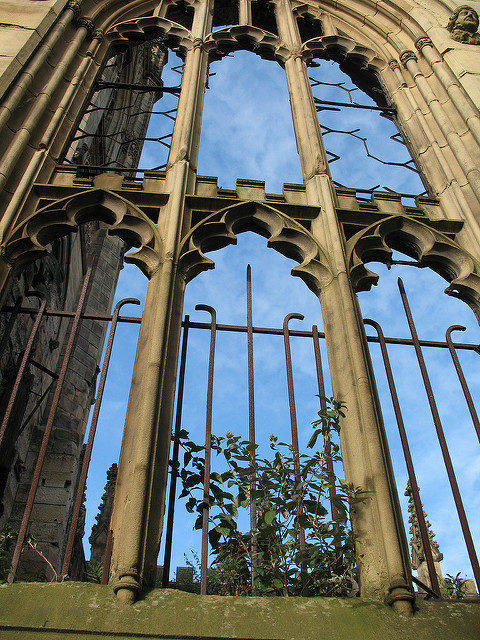 A photograph showing the detail of a window. Author: Scott CC BY-SA 2.0

Its use as a concert hall was embraced until 1849 when Philharmonic Hall in Hope Street welcomed its first music lovers. The Church of St. Luke received additional alterations made by W. & G. Audsley between the 1864 and 1873. Over the years, the residents of this city satisfied their need for prayer and to talk to God in this very Church. 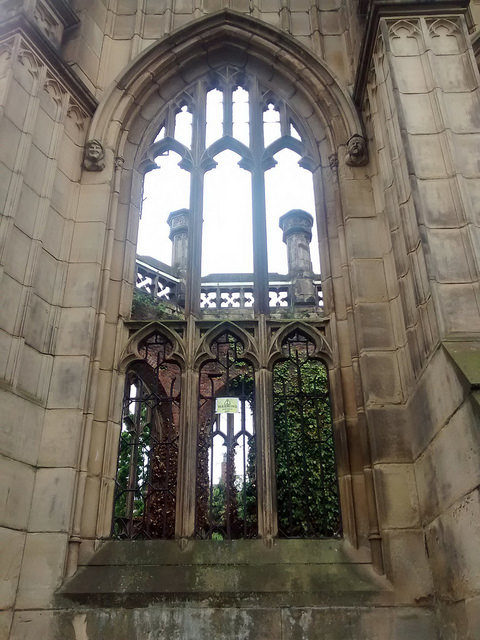 But then came something which only the wildest nightmare can produce. The citizens of Liverpool first experienced a blitz attack by Nazi Germany in August 1940. Due to the importance to the British of the large port of Liverpool, sustained heavy bombing assaults on the city continued up until January 1942. It was during one of these air raids, in which 6,500 homes were destroyed and a further 190,000 damaged, that St. Luke’s Church met it’s end. 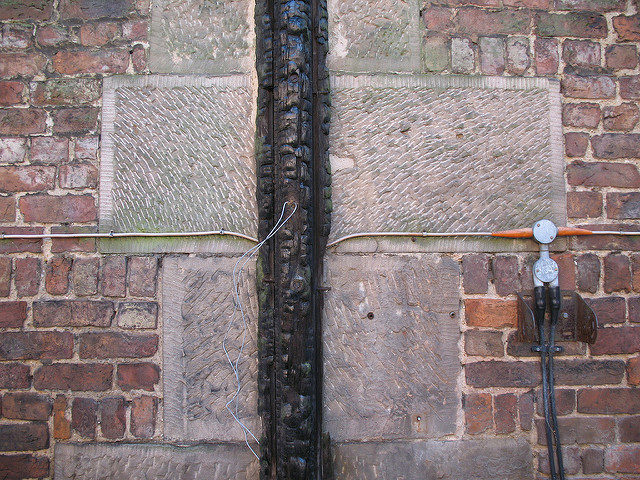 On the 6th of May 1941, an incendiary bomb landed on the church causing a massive fire that, once finished, only left an empty ghostly shell. Quickly this structure received another local name, becoming known as the ‘the bombed-out church ‘.

And so when the Second World War was over and left a world filled with scars behind it, it was decided that this burnt-out shell should be left as is to serve as a memorial to all of those that never made it past that day. Some years later on 28 June 1952, the church was designated as a Grade II listed building. 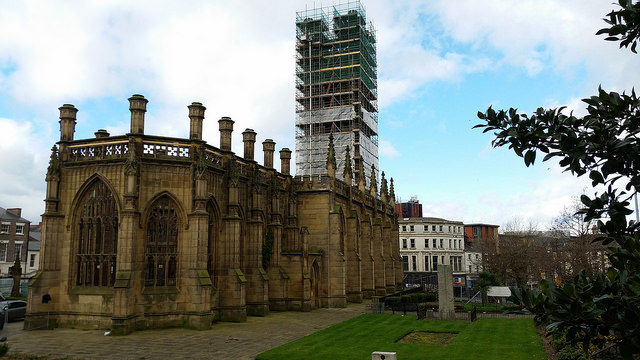 The list of what was lost that day may as well span several pages. In its original form, the Church had two aisles in addition to the nave with a groined ceiling which according to its website was “richly ornamented”.

The entire roof together with the arcades that separated the aisles from the nave was lost. From what is left and from what was written one can notice that the church was built using Ashlar sandstone in a Perpendicular style. 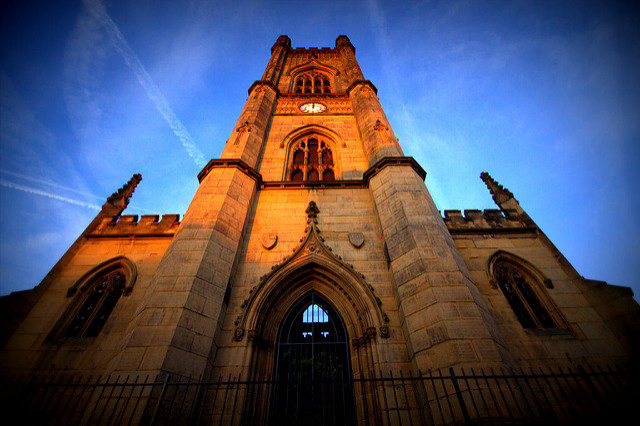 The tower meticulously poking the sky. Author: Dave CC BY 2.0

The fact that it was built using stone allows for it to endure all of the nature’s elements, except maybe fire.

« Arlington in Natchez, Mississippi: The forgotten Federal style house is in a state of total chaos
Middlesex Hospital – The Filming Location of Eastern Promises »