The unfinished Fort Jefferson proudly shows its power as covers an area of 16 acres of land in the Florida Keys Dry Tortugas National Park. Constructed from more than 16 million bricks, the coastal fortress is the largest brick masonry structure, and one of the largest forts, in the United States.

In December 1846, around five years after the Adams–Onís Treaty, in which the U.S. bought Florida from Spain for $5 million, Captain David Porter of the United States Navy was tasked with inspecting the Dry Tortugas island group to find the perfect location for a naval station to be erected in order to stop the pirates that were raging about the Caribbean Sea. 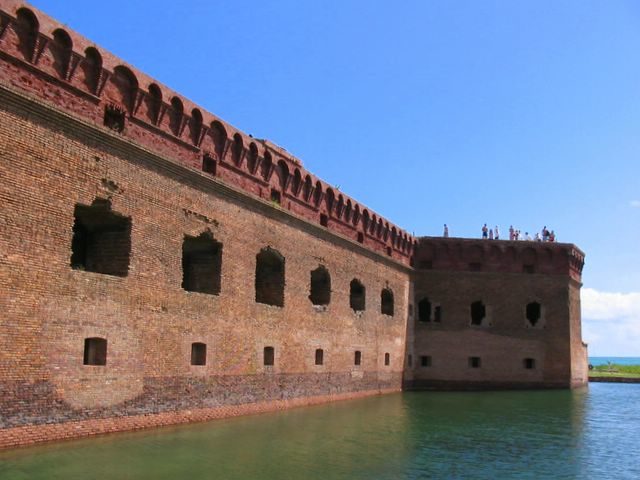 Capt. Porter informed the United States Secretary of the Navy that the Dry Tortugas were no place for a fort, for there was no fresh water on the islands, plus there was little land on top of which a fort could stand. The island group was, however, considered a good location to site a lighthouse. 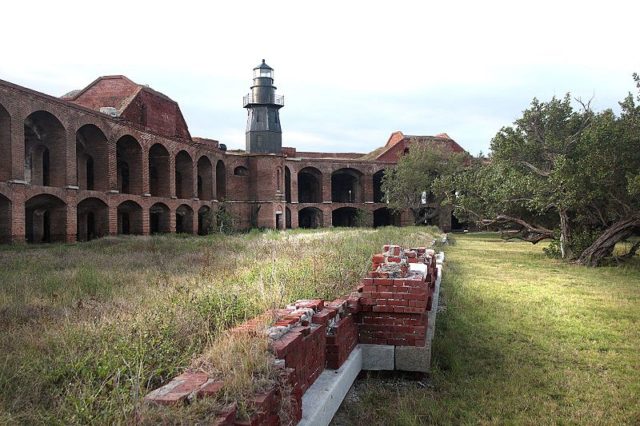 The interior of the fort/ Author: ALAN SCHMIERER CC0

An island by the name of Bush Key was chosen and construction began in 1825. One year later, there stood a 65.6 feet tall lighthouse made of brick, as well as a small house for the keeper. The island was later renamed Garden Key and the lighthouse Garden Key Light. 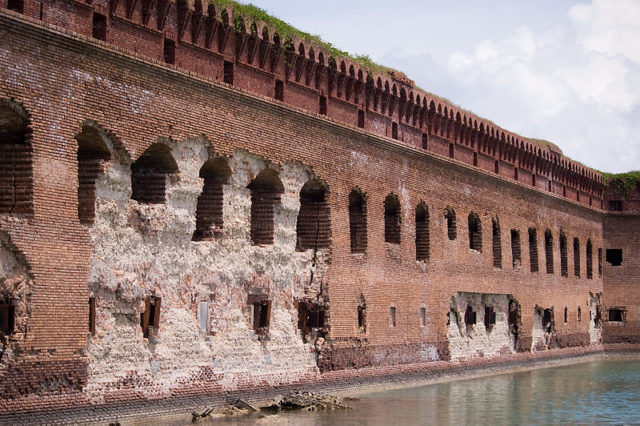 A few years later, in 1829, the USS Florida under the command of Lieutenant Josiah Tattnall (later Commodore Tattnall) was also commissioned to survey the Florida Keys islands. His opinion of the Dry Tortugas was quite different to that of Captain Porter; Lt. Tattnall was rather pleased with what he encountered there. He reported that there were 11 keys with banks and reefs that afforded good protection, and even a natural inner and outer harbor of good depth. He further stated that it would be devastating if this place fell into the wrong hands. 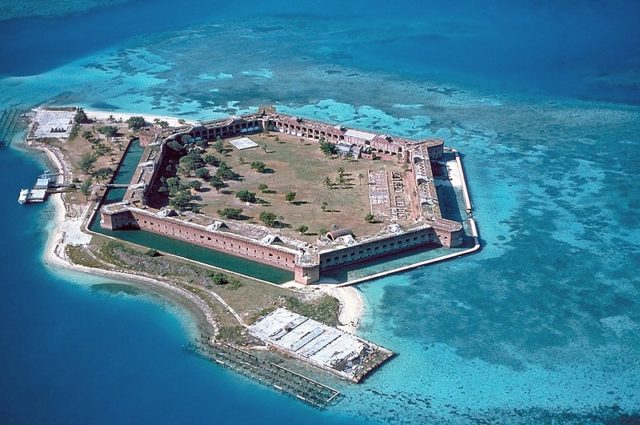 It was decided that a fort should be built there after all and in 1846 the construction of Fort Jefferson began, following the designs of Lt. Montgomery C. Meigs. The hexagonal fort has two defensive curtain walls that were 325 feet long and four that were 477 feet. There are bastions on each corner, covering every angle of the fort, each containing gun-rooms and magazines for gunpowder as well as a staircase made of granite. Each of the casemates had 150 guns, plus there were an additional 150 on the roof of the fort. 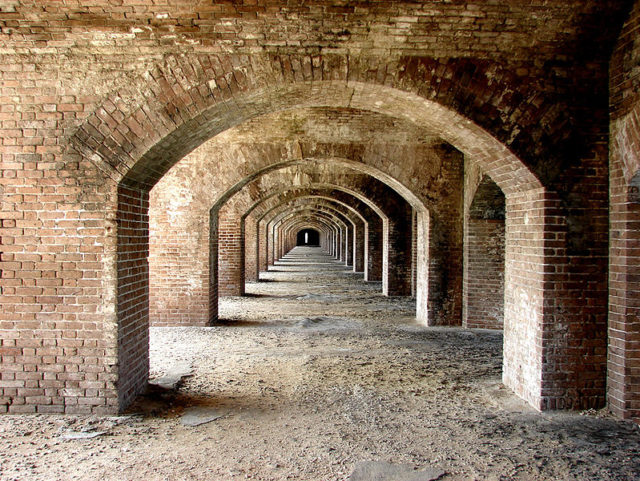 The guns were located inside the fort and fired through what is known as an embrasure. Logically the fort also had a hospital, barracks, and officers quarters. In order to run this fort, the U.S Army employed slaves for the heavy labor, as well as skilled civilian tradesmen and master masons. The problem with fresh water was eventually overcome by cisterns that were brilliantly integrated into the fort’s walls. 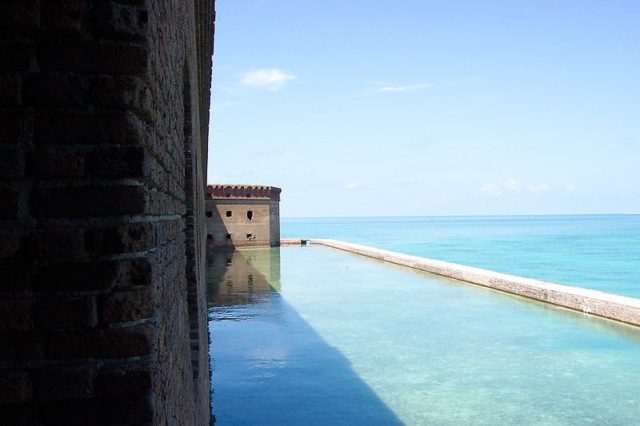 A system for filtering and storing rain was also installed. The fort participated in the Civil War. Initially 62 soldiers were deployed to the fort in 1860 to keep it safe. On January 26, 1861, when fort’s guns were fired for the first time, there were 168 people on the island, including women and children. Additional soldiers were stationed at Fort Jefferson as the war progressed. 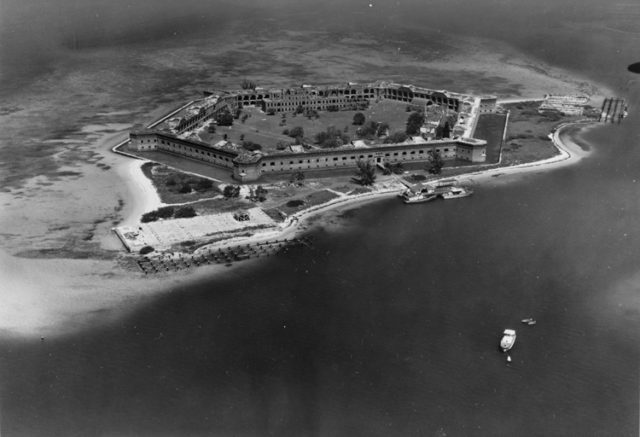 The fort was also used as a military prison for those U.S. soldiers sentenced to hard labor for crimes including mutinous behavior and desertion; the first soldier prisoners arrived in September 1861 and they were set to work with continuing the fort’s construction. In 1865, four civilian men arrived as prisoners at the fort. All of them were charged with conspiracy for their participation in the assassination of President Abraham Lincoln.

It was turned over for use as a Marine Hospital Service quarantine station in 1889, and as a coaling station during the Spanish-American war of  but was largely neglected and left to the mercy of the weather. The U.S. Navy built new coal and water facilities in 1902, but these were destroyed by a tropical storm four years later. The damaged fort was abandoned once more. 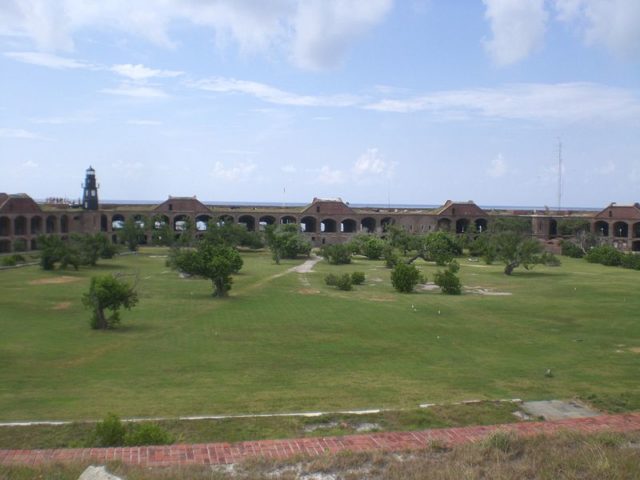 The interior of the fort/ Author: Averette GFDL

It remained that way until 1935 when it was designated a National Monument. Then in 1970 Fort Jefferson was added to the National Register of Historic Places, and in 1992 the Dry Tortugas became a National Park. Today, tourists can reach the fort either by seaplane or by ferry. Camping on the beaches around the fort is allowed.