It was built during the middle of the 19th century, east of the Isle of Grain (despite the name, this place is no longer an island but a marshland) on the coast English county of Kent. The reason that justified its existence is a simple one. It was built because the dockyards such as those found in Sheerness and Chatham were too vital to be lost.

This gun tower was here as protection in a case of a naval attack by the French during the 1850s – a turbulent period for both France and Britain. Back in those days, the rivalry between these two countries was at its highest. People feared that a bloody conflict was nearing with each passing day. 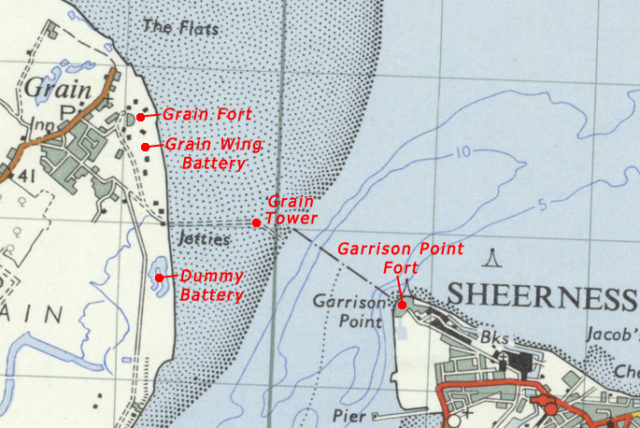 The British were fully aware that the River Thames was a vulnerability just waiting to be exploited. It is the main artery into the capital city and an important trade route of south eastern England, along which lay Deptford and its supply yards, the Royal Arsenal of Woolwich, and a number of shipyards such as the a docks at Chatham which had already been destroyed once before, during the Second Anglo-Dutch War (1667). 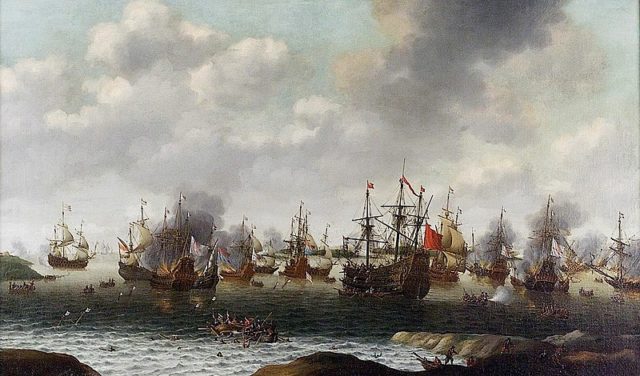 And so a number of fortifications against this possible threat of military attack were built, including Grain Tower. It stands on a tidal sandbank that can be reached at low tide by a causeway, at the strategic point where the River Medway meets the River Thames. Defense of the mouth of the Medway was provided by Grain Tower along with the guns stationed at Garrison Point on the Isle of Sheppey. 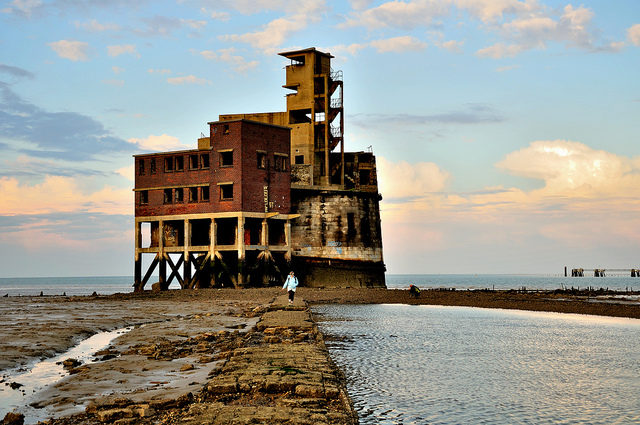 Construction began in 1848 but problems with laying the tower’s foundation in the estuary postponed the work until 1853. Grain Tower was finally completed in 1855 by Lincolnshire building firm Kirk and Parry, but with all the problems the total bill came to more than double the initial evaluation. Today’s equivalent of the final cost is close to $2.3 million. 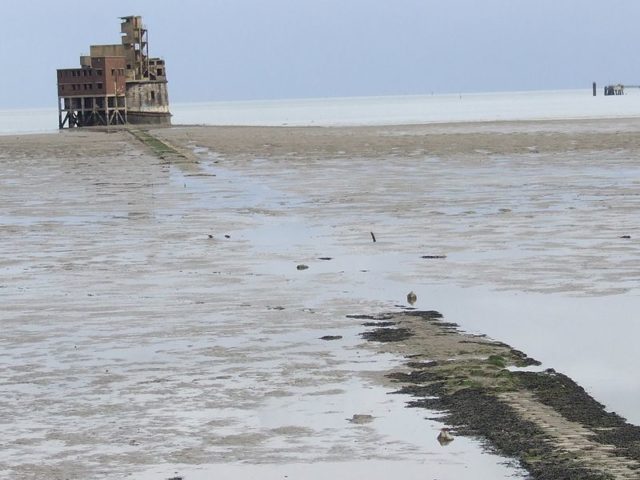 Grain Tower rises three storys (42 feet) into the air on top of a roughly oval 72 by 63 feet base. The crew that operated this tower, as well as the ammunition reserves, were safe and sound behind the 12 feet thick walls. It was equipped with three 68-pounder smoothbore cannons that were installed on sliding platforms. 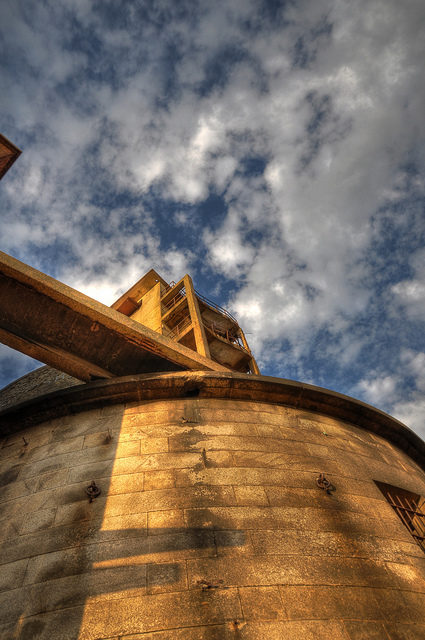 But advancing technology had not been a consideration in the tower’s building plans. The newer and more powerful rifled muzzle loader guns could not be safely fired from Grain Tower, making the structure almost obsolete as soon as it had been built. 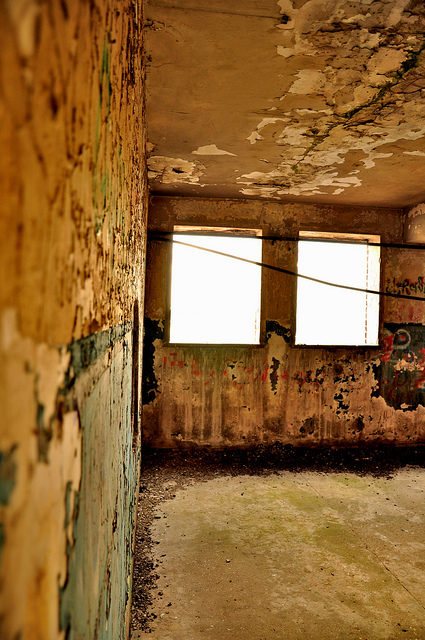 The inside of the tower. Author: Si Gardner CC BY-ND 2.0

Plans to rebuild the fort following a review of the coastal defenses in 1860 were abandoned due to the excessive cost. Despite the potential issues, the tower’s guns were replaced with rifled muzzleloaders, which themselves were removed in 1910 and the building was repurposed as a tower for communications. However, around five years later, two quick-firing guns were mounted on the roof of the tower to defend against torpedo boats. 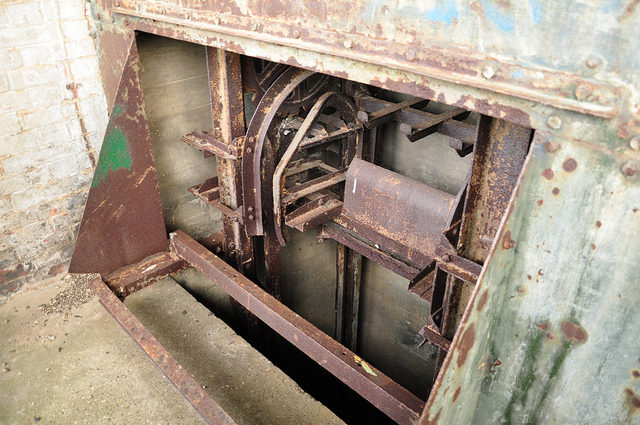 The tower remained armed during world war one and also had one end of a boom that protected the river mouth attached to it by a chain that is still in place today. In 1929 Grain Tower was decommissioned. 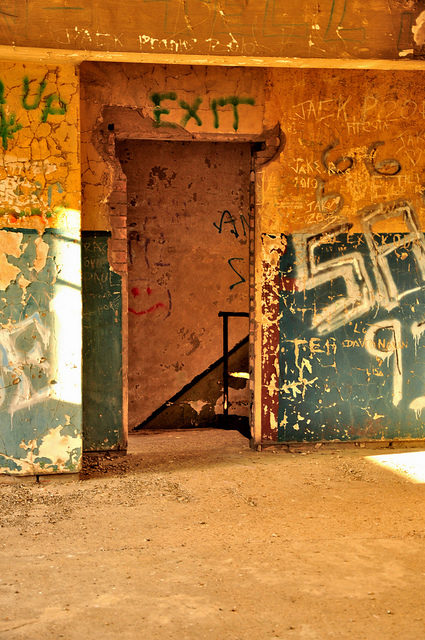 The vandals and their signatures. Author: Si Gardner CC BY-ND 2.0 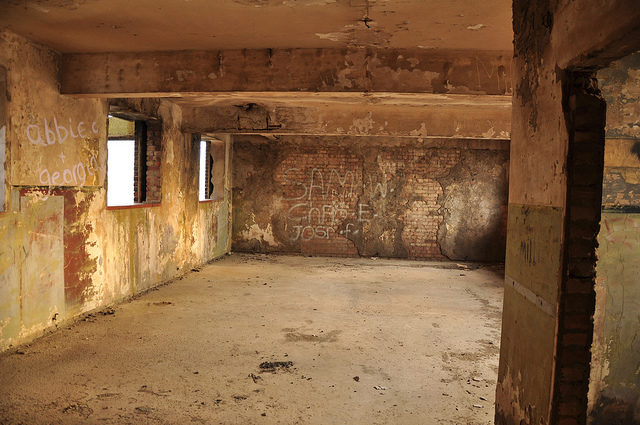 During the second world war, the tower was armed once more, with two 57-mm quick firing guns. But once the war was over, there was no need for such a tower and it was officially taken out of use in 1956. 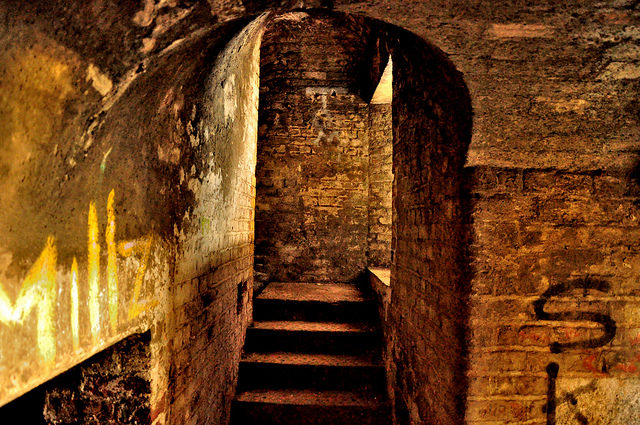 The inside of the tower. Author: Si Gardner CC BY-ND 2.0

Grain Tower passed into the private ownership of Simon Cooper in 2005, but the cost of renovation proved too high and he put back on the market in 2010. Newspapers reported a purchase offer in 2014 but this fell through, leaving the former battery still standing alone, abandoned and empty to this day.