Lifta, Israel: these historic ruins at the edge of Jerusalem are in danger of disappearing

Until 1948, the ancient village of Lifta was thriving community, but today it is only a ruined remainder of a glorious past. The place was gorgeous Palestinian Arab settlement located at the northwestern edge of Jerusalem.

In the days before the formal foundation of the modern State of Israel, Jewish and Arab communities in Palestine entered into conflict and organized in militant groups to attack each other.

The civil conflict later progressed into the 1948 Arab-Israeli War. The village of Lifta was considered a strategic point at the entrance of Jerusalem and the leaders of the Jewish militant groups wanted to secure a clear path from Jerusalem to Tel Aviv and the Mediterranean Sea.< 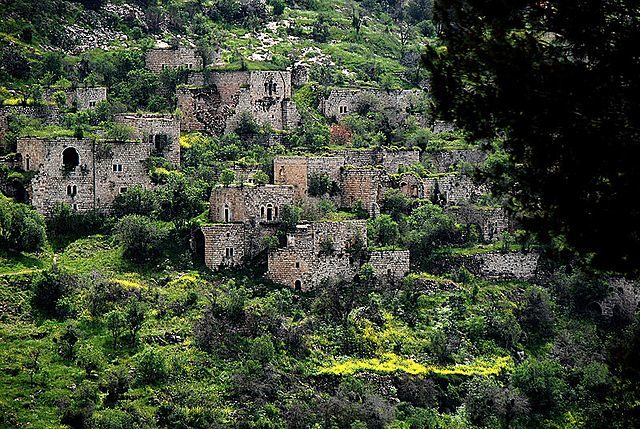 In December 1947, Jewish militants attacked the village of Lifta after receiving information that an Arab militant group was stationed there. After few days of battle with the Palestinian Arabs, they occupied the village. During the military action, all of the inhabitants escaped in various directions, mostly to the West Bank and the eastern parts of Jerusalem. By February of 1948, Lifta was abandoned. 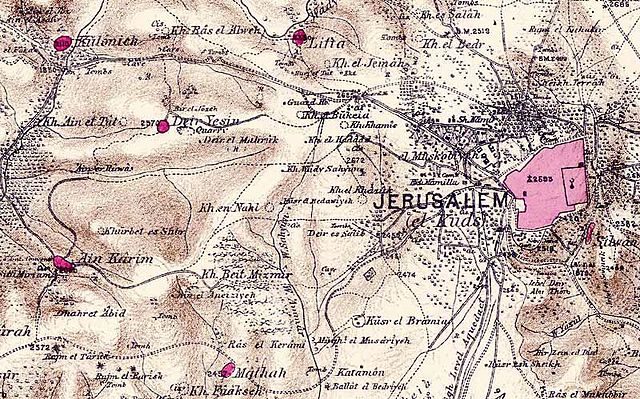 Lifta in relation to Jerusalem in the 1870s

Most of the buildings were deliberately destroyed in order to prevent the eventual returning of the inhabitants. Today nearly 50 houses still remain, although in very derelict condition. There is also the old cemetery with the adjoining remains of the mosque, the basin filled with spring water, the ruins of the village club situated north of the spring and the remains of the courtyard built by knights during the time of the Crusades. Huge parts of the ruins are covered with vegetation. 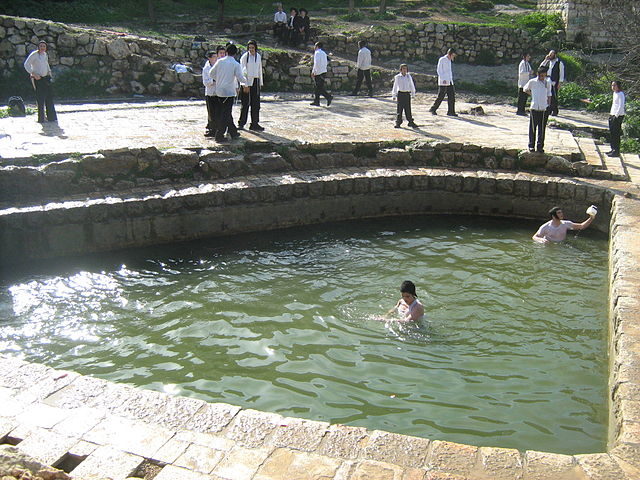 The ruined basin with spring water

Lifta is a very old settlement. It was first mentioned in the old testament of the Bible as a Canaanite village, which was positioned on the borderline between two Israelite tribes, Benjamin and Judah. In the Biblical, Roman, and Byzantine epochs, the village was called Nephtoah. During the Crusades, it was known as Clepsta. Lifta had its highest period of development during the Ottoman era. Until the complete abandonment of the village, it was continuously inhabited for more than 2,000 years. 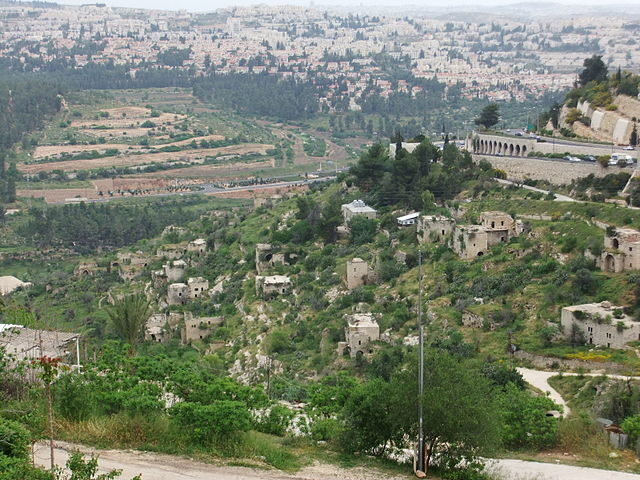 As were most of the inhabitants of the villages in the region, the villagers in Lifta were predominately preoccupied with agriculture. The documents from the beginning of 20th century say that around the village there were 1,500 olive trees. In Lifta were also located at least 6 oil pressing facilities and they supplied all the citizens of Jerusalem with olive oil. 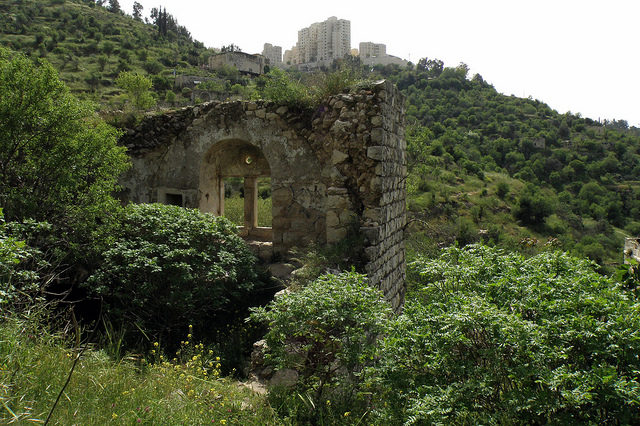 The historic ruins are in danger of the modern age. Author: RonAlmog – CC BY 2.0

The end of the WWII meant the end of the dark days for one nation and beginning of the bad fortune for another nation. The Jewish people that survived the Holocaust in Europe felt that the time for uniting of all of the Jews into one state has finally come. Huge numbers of Jews from Europe and around the world were arriving in Palestine. The leaders of the Arabs in Palestine felt threatened by the increasing number of the Jews in Palestine and started to organize militant groups in order to protect their villages and towns. Jewish leaders did the same because they were also afraid that the Arabs would destroy their new state. The result was an Arab-Israeli conflict in which many towns and villages were destroyed. Lifta is one of 400 villages and towns deserted by Palestinians during the war of 1948. It is the only village which wasn’t completely destroyed or inhabited by Jewish people. The irrational fear from the both sides shaped the future of thousands of innocent people. 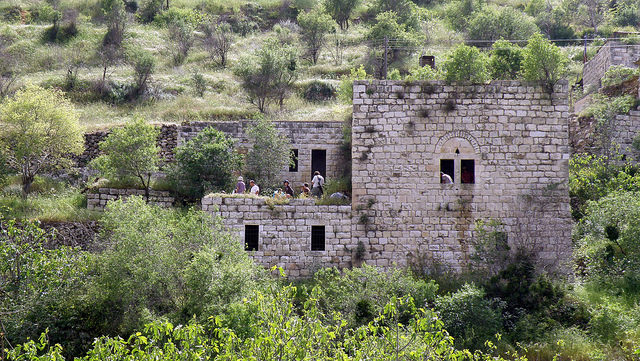 The ruins are periodically visited by tourists. Author: RonAlmog – CC BY 2.0

Before the 1948 Arab-Israeli War the village of Lifta was home to more than 3,000 inhabitants, most of them Muslims. The village was a modern settlement with more than 400 houses. It had a mosque, a completely equipped clinic, a school, a barbershop, two carpentry shops, and cafes. After the war, for a few years, Lifta became a refuge for the Jews that escaped from Yemen and Kurdistan. Some houses were reconstructed during that period. In the 1970s these buildings were used as a high school and drug rehabilitation center. Today the ruined structures are periodically visited by teenagers, tourists, homeless people, and drug addicts. 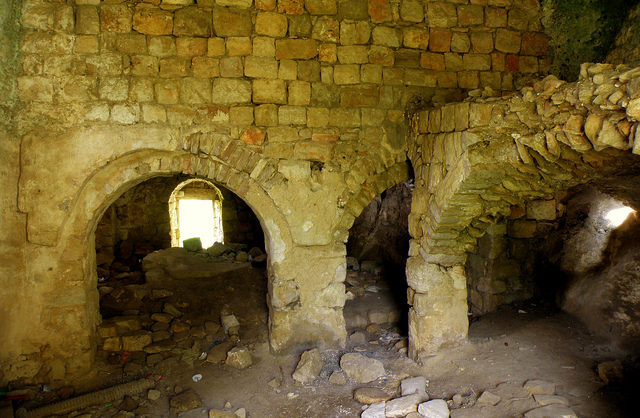 The interior of one of the houses. Author: RonAlmog – CC BY 2.0

Today Lifra is protected by the authorities as a nature reserve. But the authorities have plans completely to destroy the old village and to build a new elite suburb. The former inhabitants, but also a few Jewish organizations who are working for genuine peace between Arabs and Israelis, protested against this idea. They want the village of Lifta to be reconstructed, protected, and preserved as an important monument to the past of the region. 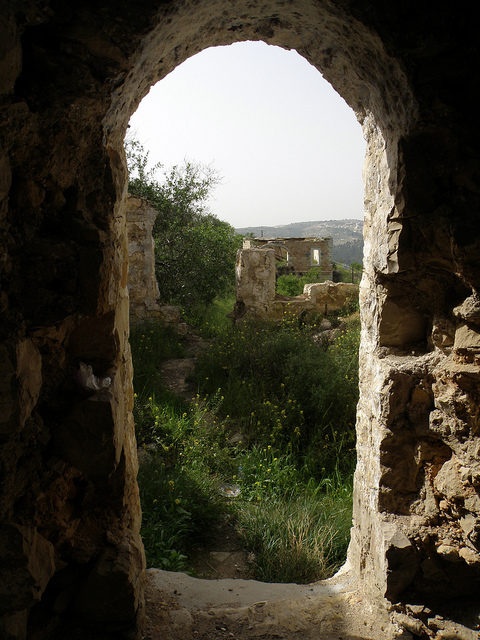 The court suspended the development of the project for modernization of the ancient village. The negotiations are still in progress. The investors want to reconstruct only a few structures and to use the rest of the land for extravagant villas. The former inhabitants are strongly against that. The village of Lifta is in the process of entering the list of protected monuments of UNESCO. In the near future, the fate of Lifta will be decided. Will modern buildings replace it?