Ignalina Nuclear Power Plant: a power station that used a reactor similar to the one used at Chernobyl

Ignalina Nuclear Power Plant is an RBMK-1500 nuclear power station in the Visaginas Municipality in Lithuania. Before it was closed in 2004, it was responsible for supplying more than 70% of the demand for electricity in all of Lithuania.

Initial preparations for the constriction of the plant began in 1974. Before construction could begin, the site had to undergo four years of preparations.

By December 1983, Unit 1 was already up and running; Unit No 2 officially came online in August 1987. The initial plan was for the second unit to be finished by 1986, but that was the year Chernobyl Nuclear Power Station had its well-known incident with reactor 4 and things at Ignalina, a power station of similar design, had to be postponed while modifications were made.

The town of Visaginas was built for the workers of the power plant. The area originally contained only a couple of villages and was an ideal spot for “greenfield investing” as the area lacked the constraints of any previous infrastructure.

The whole area was redeveloped, in a manner similar to the creation of the town of Pripyat.

Visaginas and the Ignalina power plant both stand next to Lake Drūkšiai, which is the largest lake in all of Lithuania. Water from the lake was used for the power station’s cooling mechanism. Ignalina functioned successfully until 1999. That year, Lithuania agreed to shut it down as a condition for joining the European Union. 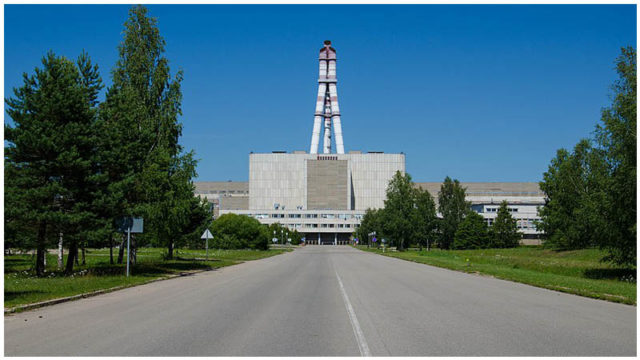 The reason the European Union demanded such a move was because the power station had no containment building to enclose the nuclear reactor, and this did not comply with EU standards. The decision was met with resentment by many of Lithuania’s citizens as the site provided income for a huge number of people.

The solution to the problem came in the form of a project which was launched to encourage these people to start their own businesses. In 2004, decommissioning of the power station was initialized: a project that comprised of two phases to close the two reactors.

Reactor 1 was shut down on December 31, 2004, and reactor 2 on December 31, 2009, at 21:00 UTC. The removal of fuel from reactor 2 began on February 1, 2011. The fuel was stored in CASTOR and CONSTOR storage casks, in a process called “dry cask storage.” The process involves sealing radioactive waste in steel containers and surrounding the containers with steel or concrete to provide further radiation protection.

The reactors were Soviet-designed RBMK-1500 water-cooled reactors. Similar reactors – the RBMK-1000 – were used in the Chernobyl Nuclear Power Plant.

At the time, the RBMK-1500 reactor was the world’s most powerful reactor and was capable of producing around 1,500 MW of electricity as well as 4,800 MW of thermal power. When the Chernobyl reactor blew up, Ignalina’s reactor was de-rated and brought down to 1,360 MW.

Phase one of the decommissioning project began in 2004 and lasted until 2013. The second phase began in 2014 and is expected to last until 2029. According to some preliminary calculations, the site of the power plant should be fully reusable by 2030, becoming “brownfield” land.

The European Union is financing the station’s decommissioning, alongside a number of other specialist funds and grants from the Lithuanian state budget.

Besides the loss of jobs, other major concerns the Lithuanian people had about the closure of the power station were that the price of electricity might reach critical levels and that the country would be struggling with nuclear waste for years. These concerns are partially true, as Lithuania has the highest electricity prices in the European Union.

The decommissioning of the station gave rise to more controversy. “Unfortunately, the dismantling of Ignalina, which is supposed to return to ‘brownfield’ conditions in 2030, is not at all going smoothly. The first phase, which started at the end of 2004, is already three to four years behind schedule,” writes Elektor magazine on September 8, 2011. Today, the decommissioning project is still ongoing and the deadline of 2030 is still looking realistic.