A textile factory in Tomaszów Mazowiecki, Poland, which once employed almost 11,000 workers and had its own choir, now stands forgotten and in ruins.

The Zakłady Włokien Chemiczynch, situated in Tomaszów Mazowiecki, was established in 1912. Its full name translates as the Artificial Silk Factory, but it came to be known by the locals as the Wistom factory. The idea for a factory in Tomaszów Mazowiecki began in 1904 when industrialists entered talks with a Belgian chemical company to produce artificial silk. A permit to build the factory was issued in 1909, and in June 1910, a plot of land that had been an old cloth factory was bought by investors.

Over the next two years, the factory site was completely renovated, and the Wistom factory opened in 1912. To begin with, the factory employed 530 staff, rising to 1,090, and they increased their output from 50kg of material a day to 800kg. Unfortunately, World War I meant production was halted. Even worse was when Germany forces occupied the area because they began dismantling the machines and destroying the property. In an effort to save the site and the business, it was agreed that the factory would instead produce tar, turpentine, and charcoal.

This turned out to be a wise move since, after Poland regained independence, the owners of the business managed to purchase the machines they had lost and resume textile production.

In 1921, production lines were expanded to include viscose silk as well as the original Chardonnet artificial silk they’d been producing (named after the French chemist who’d invented the process). With a new commercial director appointed that year, the Wistom factory expanded its export business to include China, Australia, and Egypt.

In 1925, some shares purchased by Italian bankers meant the factory could move into producing viscose yarn. By 1927, the Wistom factory employed 5,400 factory workers, 20 engineers, and another 120 people as foremen and officials. 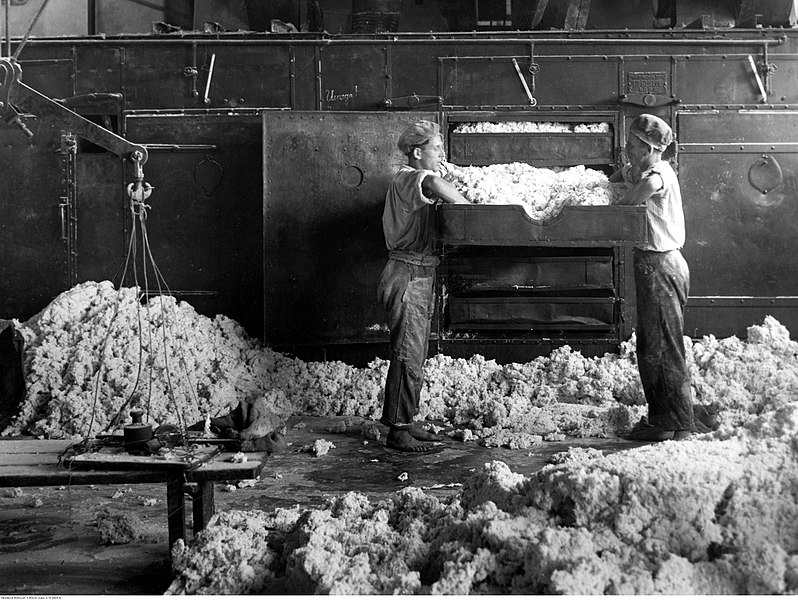 After the production of Chardonnet silk was discontinued due to the highly flammable nature of the product and the high costs needed to produce it, the Wistom factory became one of the top ten producers of rayon in the world.

By 1935, the factory covered 25 hectares and added a production line that produced carbon disulfide, a necessary compound in the production of viscose. The Wistom factory also branched out to produce other textiles such as Tomofan, Textra, Argony,  and Lintex.

In addition, various amenities were built or provided for the workers. There was a rowing harbor, an orchestra, a choir, a theater, a library, and a kindergarten. When World War II started, the factory was partially destroyed by Nazi bombers. There were several fatalities and many injuries, resulting in some of the staff being evacuated to Warsaw.

Once Tomaszów Mazowiecki was occupied by the Nazis, things went from bad to worse. Those machines which had not been dismantled were repurposed for German needs. The workers were subjected to repression, arrests, and Jews who worked there were sent to the ghetto.

A plaque commemorating some of the victims from the Nazi occupation of the Wistom factory. Public domain work.

In 1942, the production of carbon disulfide was suspended, and the factory became a testing site for Daimler engines instead. By 1944, more than 1,500 people were employed there, although this number was reduced by half not long after.

With the Red Army getting closer, the Germans dismantled the production engines, sending them along with raw materials and components deep into the territory of the Third Reich. When the Soviet soldiers arrived, they found little more than a boiler house and a water supply. Once the war was over, the Wistom factory was nationalized and given the name of State Factory of Artificial Silk No 1. By 1950, the production level was back to what it had been in 1938. As time went on, the factory went from strength to strength. As well as expanding and diversifying further, the Wistom factory produced its own newspaper and created housing estates for employees. A saying went around that “There is someone from Wistom in every house.”

In the mid-1990s, tightening of environmental protection standards put the company in financial difficulties. The workers and those who lived in the surrounding area had long been at risk of health problems due to the fumes created as part of the chemical processes. In October 1997, the company was declared bankrupt. This was a real blow for Tomaszów Mazowiecki since the Wistom factory was the largest employer in the area.

It seemed like things might be looking up in 1999 when a Chinese businessman called Cheng Meng Song bought the site with the intention of turning it into a Taiwan-Polish Industrial Park. The $20 million purchase price was to be paid in three installments, but Song only paid the first two installments and then wanted to cancel the contract. Eventually, the bankruptcy trustee sold off plots of land one by one to a variety of industrial companies that have now taken up residence on the abandoned site to manufacture products including trailers, granite sinks, roof tiles, and upholstery for Japanese cars.

However, there is still plenty of land left undeveloped, drawing urban explorers as well as those with less than honorable intentions. Illegal incineration of garbage has occurred in ruined chimneys and abandoned buildings. In addition, there have been several accidents on the undeveloped sections of land, meaning anyone visiting the ruins needs to exercise extreme care.

These amazing photographs of the Wistom textile factory were taken by a photographer from Switzerland called Grégoire Cachemaille. He has a habit of wandering though derelict places and recording what he finds there.

Grégoire runs his own website where he shares the moments that he is able to capture on camera. His portfolio includes the beauty of abandoned locations around the world. Visit his website and follow more of his work on Instagram. Another Article From Us: Beautiful Abandoned Adria Palace in Budapest