Baron Empain Palace: An abandoned palace in Egypt inspired by a Hindu temple

There is a mansion in Cairo, Egypt, that throughout the years has earned the reputation of a legendary place. A building to gain such a title in a country rich with history and to enter in a club of legendary monuments, like the Great Pyramid and Spinx of Giza, must have at least impressive architecture and to be shrouded in mystery, interesting rumors, and legendary stories. The Baron Empain Palace, also known as El Palais Hindou, has all of that.

The palace at its peak it looked like a luxurious Hindu temple. It has been abandoned for a few decades, and much of the opulence is lost, mainly because of regular vandalism. However, the palace still intrudes the imagination of locals. It is located in the elite suburb of Heliopolis, in the northeastern part of Cairo. 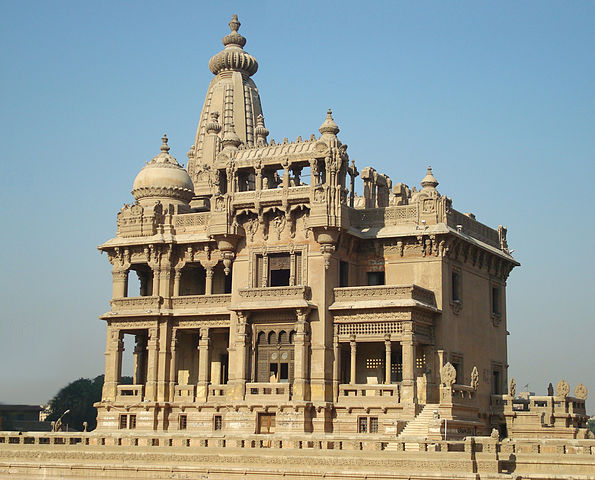 View of the exterior/ Author: amr moustafa shalaby – CC BY 3.0

The owner, Baron Édouard Empain, was moved by the architecture of the Hindu temples, especially of Angkor Wat in Cambodia and Orissa in India, and wanted to give some Southeast Asian charm in the predominantly Islamic and Coptic architecture of Egypt. 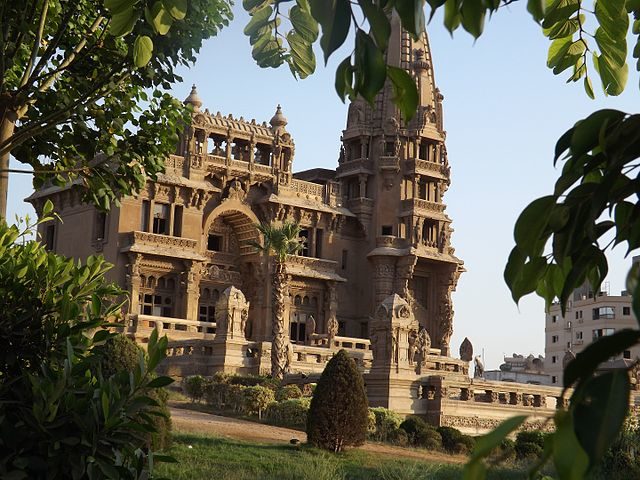 Édouard Louis Joseph Empain was self made millionaire born in the Belgian municipality of Belœil. He worked for a metallurgic company in Belgium and later founded his own company for railway construction, because he wanted to give the people of rural Belgium better public transportation. His first railroad route had great success. Soon his company embarked on building railways in other parts of Belgium and France, including construction of the Paris Metro. After finishing of the Paris Metro, he was given the title Baron by King Leopold III of Belgium. Empain made a lot of money and started to build railways across the world. He even founded his own bank and traveled a lot in India, Indonesia and Egypt. In Egypt he invested in a project for a construction of an important railway route, but he had to leave his investment because of constant pressure and obstructions regarding unfair competition. But he didn’t leave Egypt. 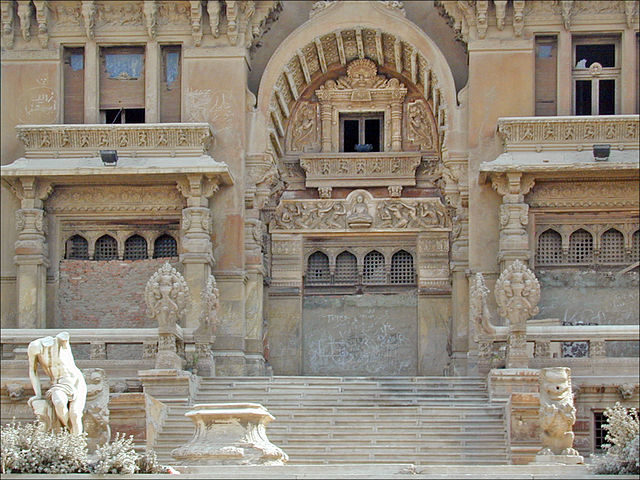 Some of the statues have been damaged/ Author: Jean-Pierre Dalbéra – CC BY 2.0

He was already in love with the desert and the Egyptian landscape. Some rumors said that he was more in love with the beautiful aristocrat Yvette Boghdadli. The Baron bought a lot of cheap land in the desert approximately 6 miles from the center of Cairo and started to built his own oasis in the desert. The new city was called Heliopolis. It was connected to Cairo with fast railway. The place was designed as a city of luxury and pleasure, with modern infrastructure, electricity, fresh water, hotels, villas, parks, tennis and golf courts, a hippodrome, and apartment buildings. And the diamond of the Baron’s crown in the hot desert was his own palace. 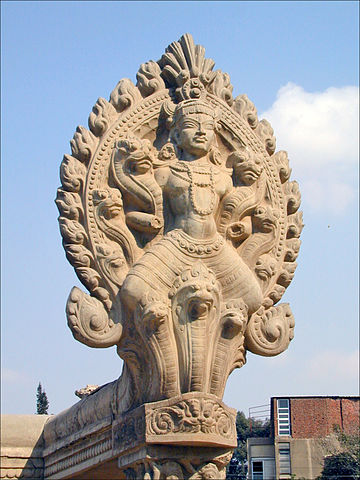 It was purposely positioned in the center of Heliopolis and on artificial elevation. It was higher from the other structures because Empain wanted to observe the development of his city. Although built mostly from concrete, the architect Alexander Marcel and the designer George Louis Claude created a fascinating miracle. 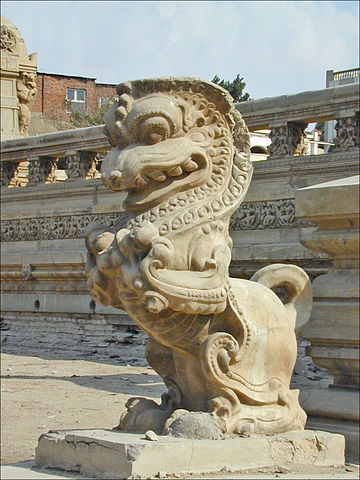 A statue of dragon/ Author: Jean-Pierre Dalbéra – CC BY 2.0

Construction took place between 1907 and 1910. Indonesian sculptures and artists came directly from Indonesia to fulfill entirely the wishes of the owner. Many statues of Buddha and Krishna, elephants, dragons, nymphs and snakes were put at the front of the palace and on the facade. Today most of the sculptures are still on their places, although some of them are without their heads, because they were demolished by looters and vandals. The luxurious interior decor is all gone a long time ago. The expensive mirrors and doors are gone, the marble is destroyed and the beautiful frescoes on the walls are covered with graffiti, swastikas and pentagrams. 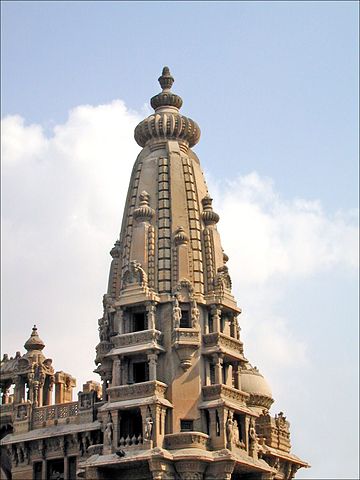 Empain used mostly his residence for luxury parties. But his days of joy in the palace were interrupted. Tormented because of his many affairs, his wife accidentally fell down from the interior staircase that goes towards the tower room, and died. After few years his daughter, who suffered from psychological problems, was found dead in the underground basement. The police said that she had probably committed suicide. Because of these two strange and unsolved events, the locals think that their ghosts still wander in the empty palace. 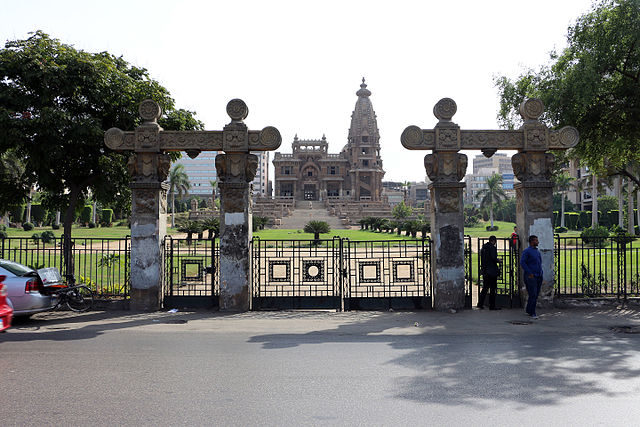 The property is guarded with guards/ Sailko – CC BY 3.0

When World War I started, Empain returned in Belgium. After his death in 1929 his son and his grandsons became owners of the palace. They continued to use the property for extravagant parties. It was sold in 1952 to a Saudi family. The new owners didn’t have much interest to live in Egypt and they tried unsuccessfully to sell it several times. The palace has been left completely abandoned since the end of 1950s. 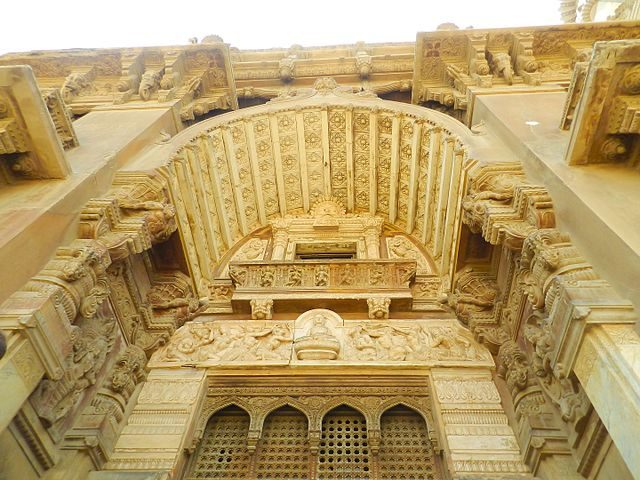 There were rumors in the 1990s that at night it was visited by satanic cults and that they held their rituals there, especially in the underground rooms which are connected with the nearby Catholic church. The official reports said that probably some teenagers were partying there. Also there were rumors that strange voices were heard from the inside of the palace. Some believe that the voices are from the ghosts, while others think that they are from the only permanent inhabitants in it: the rats, and the stray dogs and cats.

Since 2005 the owner of the palace is the State of Egypt. Public visits are strictly forbidden. The property is surrounded with bared wire and it is protected with guards. The Egyptian government tried to reconstruct it, but the project was stopped because of the political turmoil in Egypt. Their plan is to develop the palace into museum.