Palaces are symbols of wealth, royalty, prestige, and luxury. Every opulent corner and detail in their exterior and interior are often worth a fortune. The builders of the palaces wanted to demonstrate their wealth and the power of their kingdom or empire through the splendor of their palaces. No expense was spared in delivering this message to the world or in competing with other aristocrats to build the most impressive residence.

Today there are still palaces which are residences of royal families and members of the nobility. Because of political changes in some countries, many palaces ceased to be homes and today have been adapted into museums, parliaments, or presidential residences. And because of turbulent political and socioeconomic changes in other parts of the world, some palaces were destroyed and now their ruins are only a shadow of their former glory. 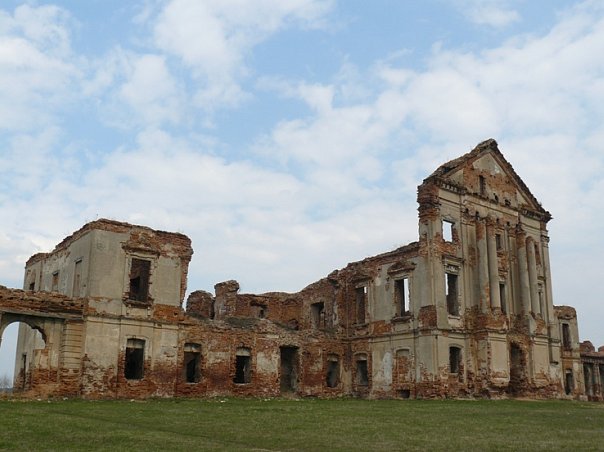 The ruins of Ruzhany Palace are located in the small town of Ruzhany in the western part of Belarus. At the peak of the palace’s glory, it was known as the “Versailles of the East” or the “Belarusian Versailles.” The palace thrived during the heyday of the powerful Sapieha dynasty, who owned the palace and the property around it for several centuries. 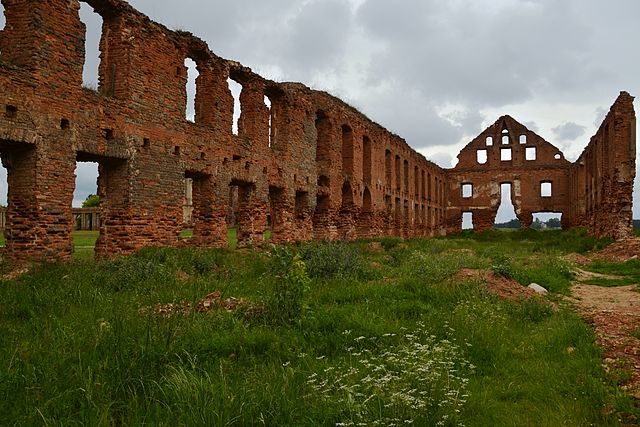 Historical documents show that the story of Ruzhany Palace probably began around the end of the 15th century. Until 1552, the area of Ruzhany was owned by the Tyshkevichs, a Polish-Lithuanian noble family. In those days, Ruzhany was a well-known town where important fairs happened very often. Many unique products, such as colorful carpets, pottery, and belts, were produced in Ruzhany, which made it a major Eastern European trade center during the Medieval Period. 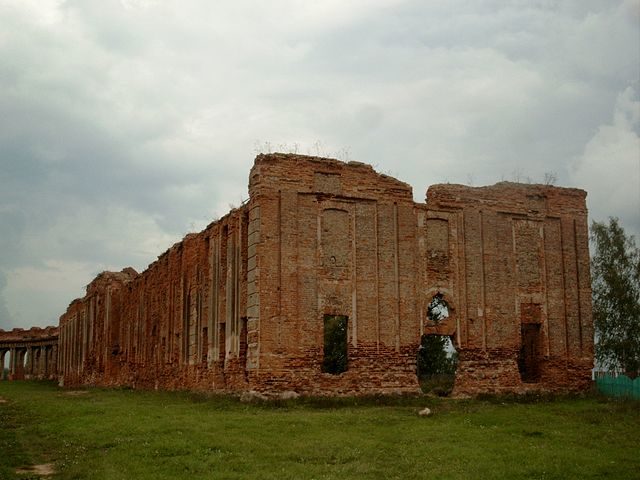 At the end of the 16th century, the area came into the possession of the Sapieha family. Lew Sapieha, who was a prominent politician, nobleman, chancellor in the Grand Duchy of Lithuania, and one of the creators of the Statute of the Grand Duchy of Lithuania, bought the Ruzhany property in 1598 and immediately ordered the construction of a great castle. Soon, a large castle complex with three towers was erected in Ruzhany. It served both as a mighty stronghold and a residence at the same time. 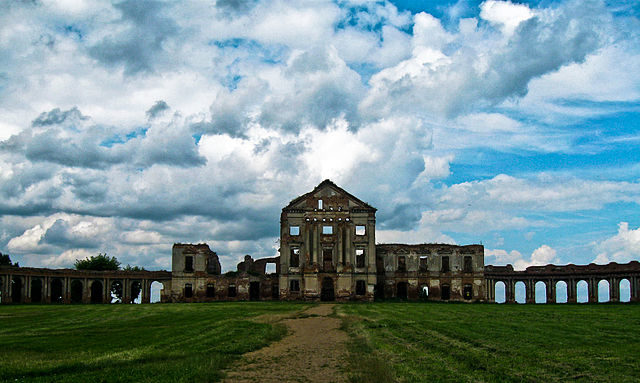 During the 17th century, the Ruzhany Castle became a focal point of the political life of the Grand Duchy of Lithuania. The castle was visited by numerous ambassadors and kings. Many important topics for the future of the region were discussed there and many crucial decisions were also made. The greatness and the importance of the castle can be noticed in the fact that the state treasure of the Duchy of Lithuania, the state documents, the archive of the Sapieha family, the arsenal, and the food and wine reserves were kept in the basement of the castle. 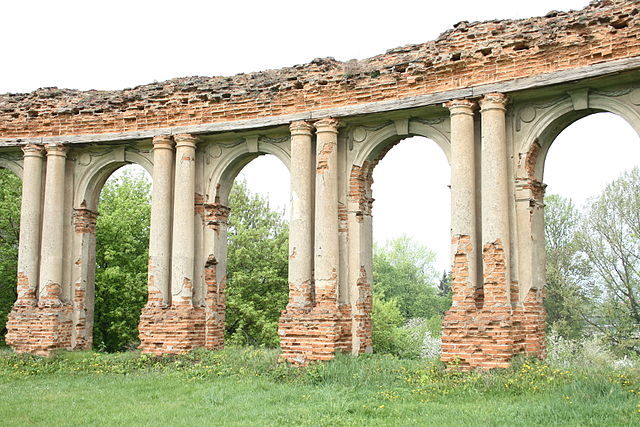 However, as a result of the beginning of the Great Northern War and the continuous open conflict between the Polish noble families in the second half of the 17th century, the castle was several times seized and looted. The Sapieha family left the castle, of which a substantial portion had been seriously damaged and ruined. 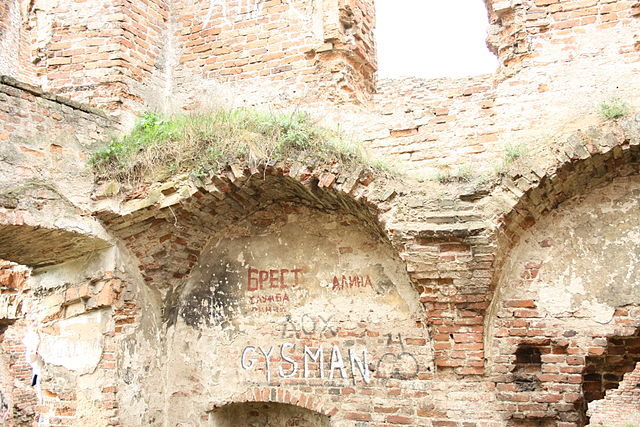 Some parts are overgrown with vegetation. Author: Arcamster – CC BY-SA 3.0

In the 1770s, Alexander Sapieha decided to rebuild the complex and revive its status. The responsibility for the reconstruction work was given to the Saxon architect Jan Samuel Becker. He transformed the ruined medieval castle into an extravagant palace surrounded by an English park, gardens, and an orangery. Several other structures adjoining the main building and outbuildings were also constructed. The property was finally completed in 1786 in a combination of baroque and neoclassical architectural style. At the time, the beauty of Ryzhany Palace was compared to that of Versailles, mainly because it was built in the same style as the French palace. 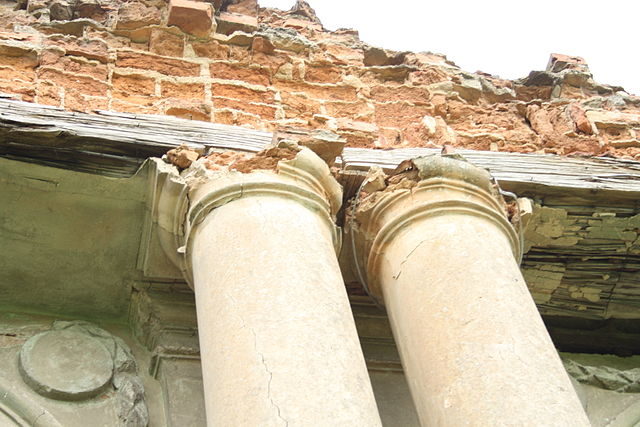 The palace also had a huge library, a gallery with many artworks and a theater. The theater became one of the most famous in Europe and employed nearly 100 actors and musicians with plays that were performed by the French. 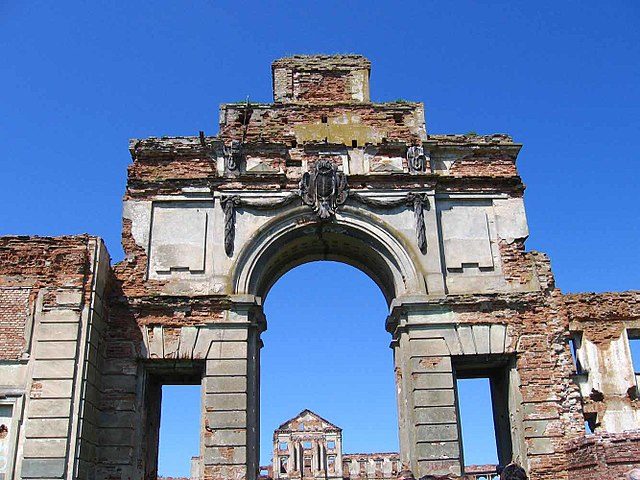 The entrance gate before restoration. Author: Ihar Strakha – CC BY 3.0

After an armed uprising in 1831, the property of the Sapieha family was confiscated. A Jewish businessman, Ari Leib Pines, rented the palace and he opened a textile manufacturing plant which ran successfully for several decades. In 1914, the palace burned down because of an accident caused by one of the workers. Between WWI and WWII, parts of the palace were reconstructed, but after the WWII, the palace was left in ruins again. The locals scavenged bricks from it to restore their houses that had been damaged during the war. 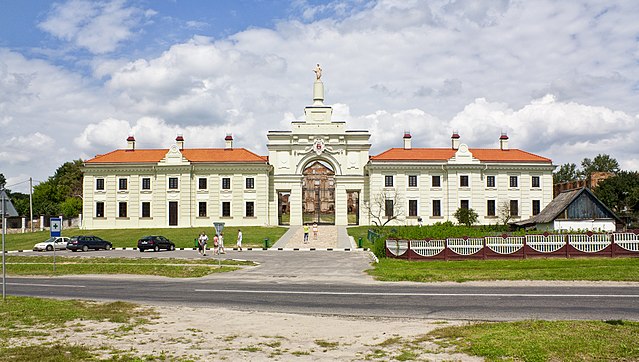 2008 saw the initiation of a huge effort to restore the site. Today, the entrance gate and two outbuildings have been restored. It is open for visits and the site of a few annual festivals. There is also a museum of the Sapieha Dynasty. However, the main building of the palace and the adjoining structures are still roofless and in ruins. The authorities hope that in the near future the palace will be fully restored.

« The ruins of Villers Abbey in Belgium: At its peak it looked like a small town
Flannan Isles Lighthouse: The unsolved mystery of the three missing keepers »