Watkin’s Tower: Only stage one of Watkin’s over ambitious tower project was completed before funds dried up

Watkin’s Tower was an enterprising, never-completed tourist attraction in Wembley Park, London. The tower was intended to surpass the height of the Eiffel Tower and it was commissioned by Sir Edward Watkin. 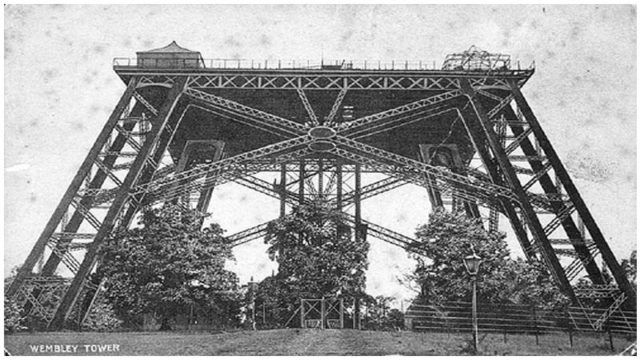 The first and only stage of Watkin’s Wembley Tower, completed in 1899 and demolished in 1904.

Born in 1819 in the city of Salford, Lancashire, he was the son of wealthy merchant and social and political reformer, Absalom Watkin. He followed in his father’s political footsteps, standing as a Member of Parliament for the Liberal Party.

Edward Watkin was at the fore of a number of ambitious railway engineering projects. He had an impressive career portfolio; starting out as secretary for the Trent Valley Railway, he went on to become a director of nine British railway companies, as well as an advisor for construction of part of the India railway system.

Watkin was also involved with building the Canadian Pacific Railroad and the Athens–Piraeus Electric Railways in Greece, one of the oldest metro lines in the world. 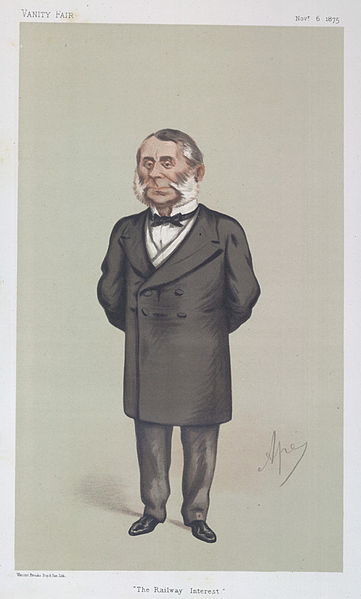 While Watkin successfully oversaw many innovative projects, he also had some spectacular failures. The most outstanding of these was his idea to build a railway line from Manchester, in the north of England, to Paris.

In 1800, more than 100 years before the Channel Tunnel that today runs from Folkestone to Calais was opened, the visionary entrepreneur began digging a tunnel underneath the English Channel.

It was a controversial venture as many people feared the French would use it as a route to invade England — notable opponents included the War Office Scientific Committee and Field Marshal Lord Wolseley of the British Army. Even Queen Victoria voiced her disapproval and the first channel tunnel attempt was abandoned in 1881. 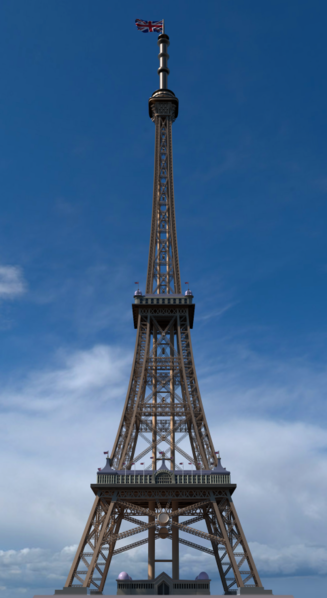 Watkin’s Tower at Wembley Park was another of his grand schemes that refused to get off the ground. Well, it did reach reach as far as 154 feet above it’s foundations — nowhere near the planned height of 1,175 feet.

British Poet Laureate Sir John Betjeman gave his description of the tower for a 1973 BBC documentary: “Beyond Neasden there was an unimportant hamlet where for years the Metropolitan didn’t stop.

Wembley. slushy fields and grass farms. Then out of the mist arose Sir Edward Watkin’s dream: an Eiffel Tower for London.” 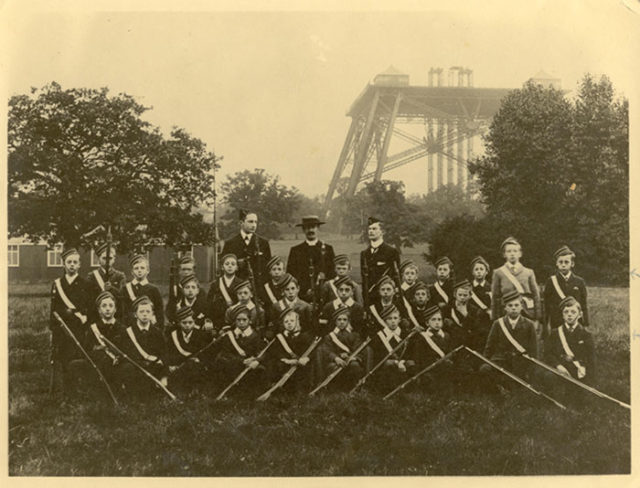 Wembley Boys Brigade posing in front of the tower.

Always looking for new ways to attract passengers onto his rail services, Watkin spotted the potential profit to made by encouraging Londoners to travel out of the city, into the countryside.

He was at the time Chair of the Metropolitan Railway, which is now a part of the London Underground network. Watkin had pushed to expand the rail line to link London with neighboring rural counties. Now all he needed was to attract hoards of eager customers.

Words alone would not suffice for this job — he needed something bigger to entice crowds of passengers. His solution was purchase a plot of land near what was at that time a peaceful hamlet, seven miles from London, in the county of Middlesex. Today, Wembley falls within the Greater London Borough of Brent. 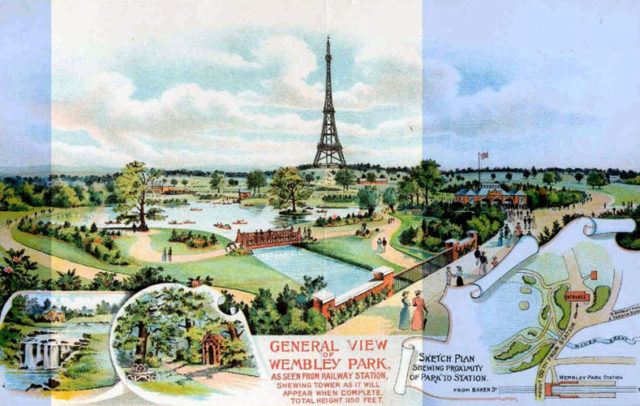 An artist’s impression of Wembley Park, showing Watkin’s Tower as the central feature.

The Metropolitan Railway passed close to Wembley, so the location was ideal. The former farmland known as Wembley Park had already been sculpted as a wooded parkland in the 1790s by landscape designer Humphry Repton. Watkin envisioned a huge amusement park that would offer a boating lake, sports facilities, waterfalls, beautiful walks, and formal gardens.

In the middle of the park, the pièce de résistance was to be a very tall metal tower that would present jaw-dropping panoramic views.

As he was inspired by the Eiffel Tower, Watkin invited Gustave Eiffel himself to design the new tower, but he disliked the idea and politely declined. So an architectural competition was launched, offering 500 guineas as prize money. 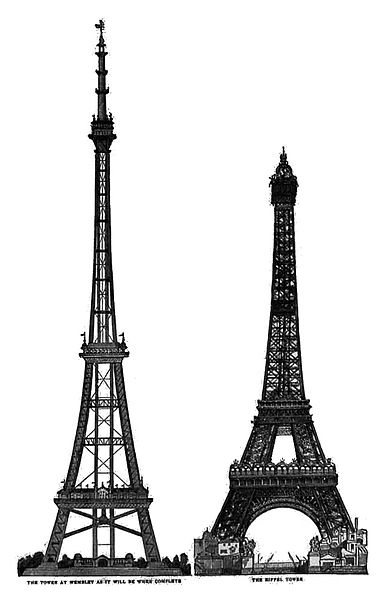 Watkin’s Tower versus the Eiffel Tower.

It would have electric lighting, and the plans even included a fresh-air sanatorium, the latest fashion in hospitals for the treatment of tuberculosis.

Financial setbacks began before the blueprints were dry. No-one wanted to invest in Watkin’s International Tower Construction Company, but undeterred, he decided to go ahead with just his own money in the kitty. This necessitated remodeling the design to make it cheaper to build.

Watkin was confident that money would be no issue but he was wrong. “His projections regarding time and money were hopelessly optimistic, and he raised only £87,000 [$115,780], two-thirds of it, from his own railway,” writes the Guardian. 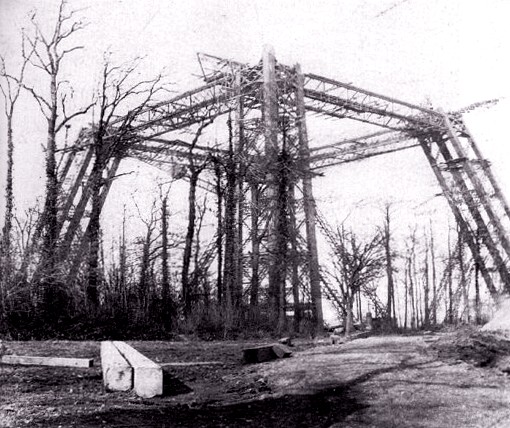 The tower under construction.

Nonetheless, Watkin went ahead with the project. The foundations of the tower were laid in 1892 and when the park itself and Wembley Park Station were officially opened two years later, only the skeleton of the first stage had been built as engineers struggled to stabilize the boggy ground. He was right: the park proved to be a major attraction for Londoners – but the tower soon came to be known as the London Stump, or Watkin’s Folly. 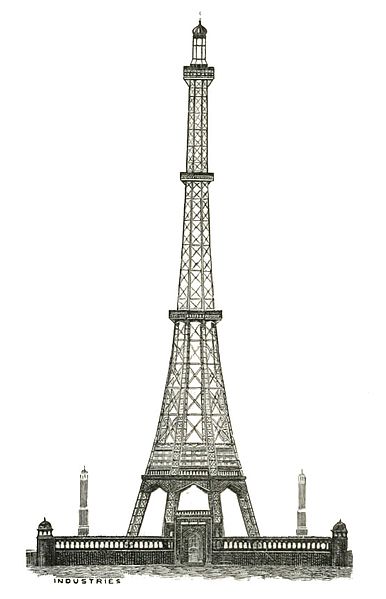 The winning design no. 37 submitted by Stewart, MacLaren, and Dunn.

Part of the problem was that Watkin’s health was deteriorating. By the time stage one was completed in 1895, Watkin had retired and the company struggling to stay afloat. It was liquidated in 1899 after the fledgling structure began to subside. Perhaps it was a blessing that Watkin passed away in 1901 as he didn’t have to witness the demolition of his tower.

The world-famous Wembley Stadium now stands on the exact spot reserved for the tower and attracts the great flock of people that Sir Edward William Watkin once dreamed of.

« The abandoned Baths of Caracalla: a filming location for John Wick: Chapter 2
Brean Down Fort in England: one of the Palmerston’s forts, which never saw action »