It once served as a US military post which occupied Davids’ Island in the western end of Long Island Sound in the city of New Rochelle, New York. Traditionally, the forts usually receive a name in honor of a certain general, and this fort was named for Major General Henry W. Slocum who served as a Union corps commander during the American Civil War. 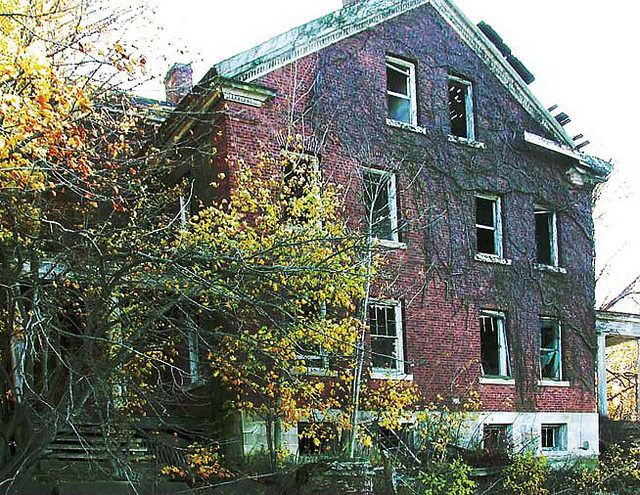 The effect of time itself. Author: Pequotio CC BY-SA 2.0

The earliest military use of this island was recorded in 1861 when the 3rd Regiment or the 63rd New York Infantry of the Irish Brigade established Camp Carrigan here. The following year in 1862, the island was leased by the U.S. Government, the first use of Davids’ Island by the Regular Army. 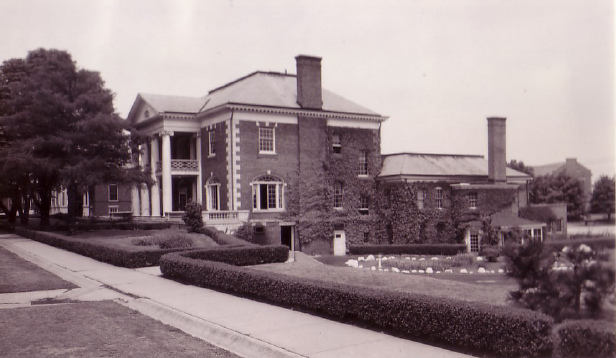 Naturally, the military camp needed a hospital and thus De Camp General Hospital, named for Dr Samuel G. I. de Camp was established to help the thousands of wounded individuals from all across the battlefields of the American Civil War.

The hospital soon had more the 2,000 wounded Union soldiers in it’s care. After the destructive Battle of Gettysburg, the volume of casualties temporarily swelled and Davids’ Island also came to hold more than 2,500 injured Confederate prisoners of war. 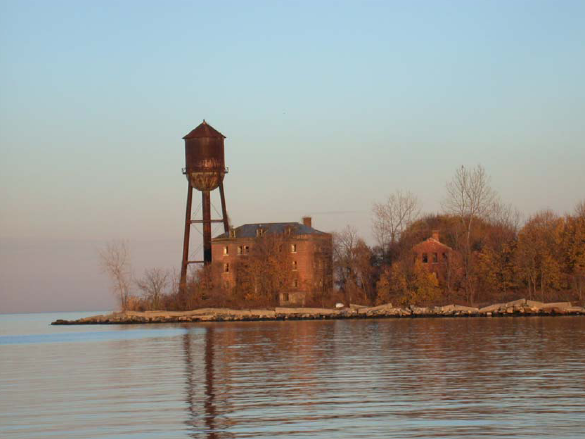 Once the civil war was over the island was conveyed by Congress to the United States as the Davids’ Island Military Reservation in 1867. Several years later in 1878, Davids’ Island was made a principal depot of the U.S. Army General Recruiting Service. Naturally, this marks the beginning of the island as a recruitment and training centre. 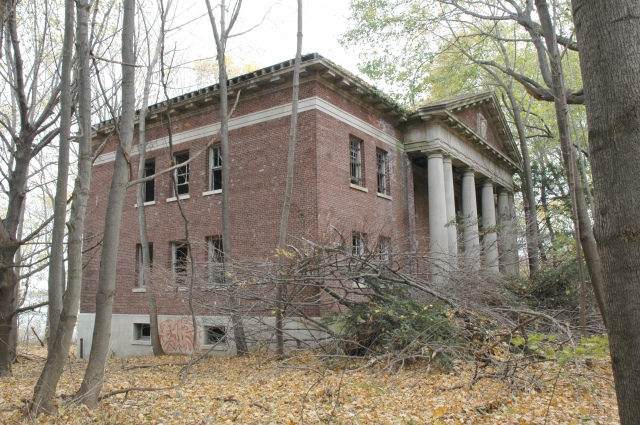 Side view of an abandoned building. Author: Pequotio CC BY-SA 2.0

Next, there came World War One and this island became one of the busiest recruit training stations in the country. Its purpose was to process as many as 100,000 soldiers per year that came from the states of New York, New Jersey, Pennsylvania and New England.

According to the reports from December 1917, there were so many recruits to Fort Slocum that an overflow had to be housed in New Rochelle. After the First World War and before the Second, there was a proposal for closure of Fort Slocum. However, the fort was kept open and given a variety of different roles. 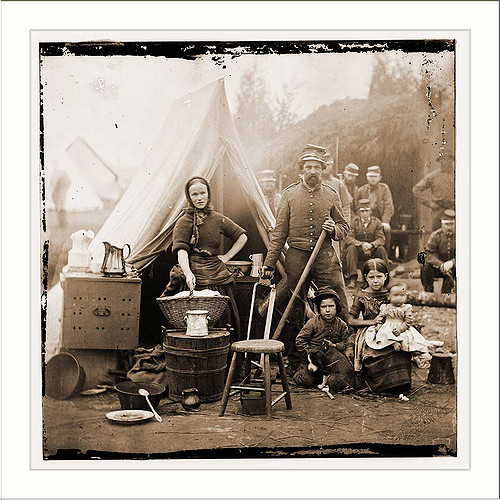 Farm vicinity of Fort Slocum taken in 1861. Author: Snapshots of The Past CC BY-SA 2.0

Fort Slocum even received some renovation, such as replacing the old water tower and installing a sewage system in 1929. A year later in 1930, a large number of the coast defence batteries were demolished so that the three new barracks named the Trivium could be built. 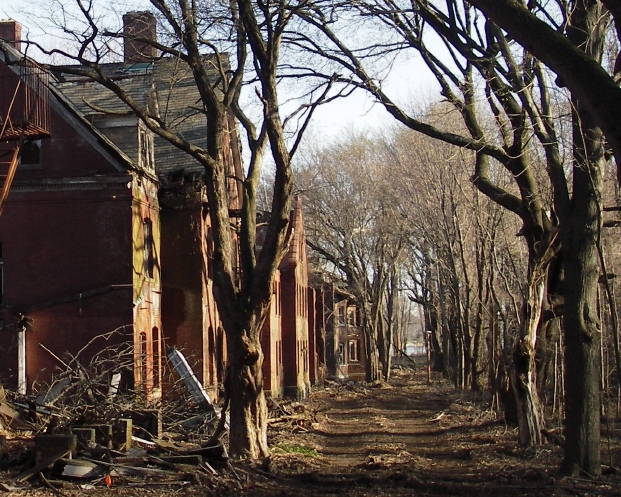 Time went on and soon the Second World War was ready to unleash its horrors upon the earth. During this period, Fort Slocum became part of the New York Port of Embarkation. Its purpose was to serve as a staging area for troops moving overseas. To manage the need to move huge amounts of men and material overseas, between 1941 and 1942, Fort Slocum hosted the Atlantic Coast Transportation Officers’ Training School. Its mission was to train former civilians to apply their experience in the transportation industry for Army operations.

Some of the abandoned buildings. Author: Pequotio CC BY-SA 2.0

By 1944, the need to ship soldiers to Europe had diminished and so the fort was given another purpose. It was to serve as a Provisional Training Center for the remaining years of the war, after which it was converted for use as a nuclear research center. 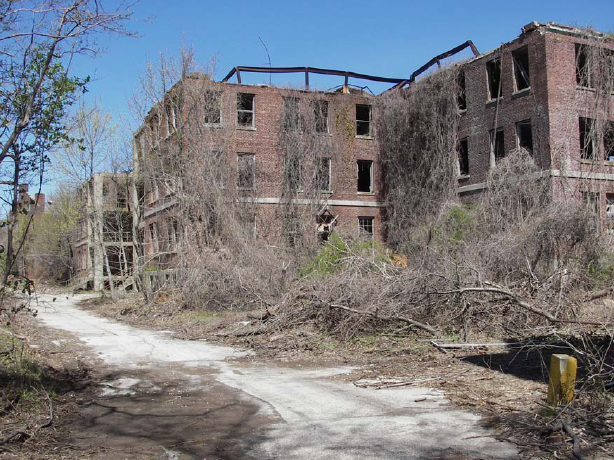 For a short period was renamed to Slocum Air Force Base and housed the Headquarters First Air Force. During the period between 1951 and 1962, Fort Slocum was the home of the U.S. Army Chaplain School.

The Fort was deactivated on November 30, 1965. As time passed, the fort remained neglected and deteriorated severely. And so the buildings and the rest of the structures turned into ruins. That’s when the Congress in 2004 appropriated funds to remove the ruins through a Defense Department program set up to assist communities in reusing former defence facilities. 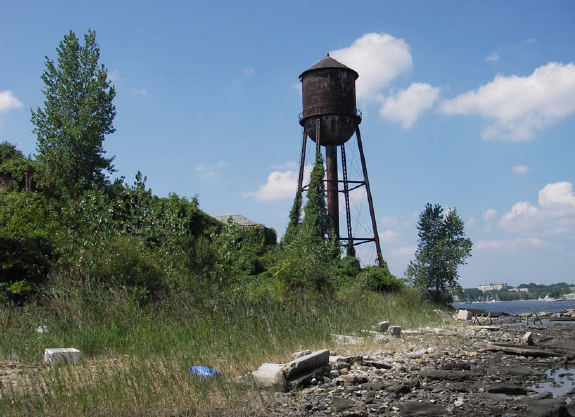 Later in 2008, the remaining structures on the island were demolished, among them, the iconic water tower. The purpose for the demolishing was so that the island can be used as a park.

« Pleasure Beach: Connecticut’s largest ghost town brought back to life after almost two decades of abandonment
The ruined New Slains Castle that may have been the inspiration for Bram Stoker’s Dracula »