St. Benet’s Abbey, England: The only monastery that wasn’t closed by Henry VIII

St. Benet’s Abbey can be found in an isolated location nearby to the joining of the River Bure and the River Ant in the heart of the Norfolk Broads, East Anglia, England. Today, the abbey is only a picturesque ruin but almost a millennia ago it was a flourishing site of great significance to the area.

The ruins are close to the village of Ludham, though they stand peacefully in solitude in the countryside, away from noisy roads and the bustle of human life. 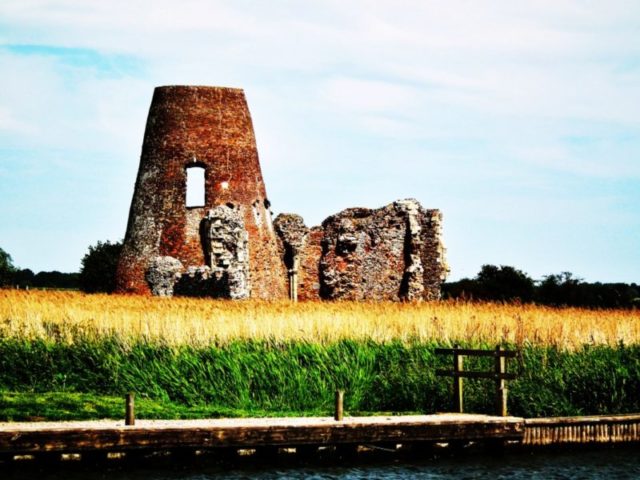 The ruins of the abbey and wharf from the River Bure/ Author: Richard Harvey – CC BY 3.0

St. Benet’s Abbey, also known as the abbey of St. Benet at Holme, grew constantly during the medieval period when it was a prosperous community of monks of the Order of St. Benedict. It was the first Benedictine abbey in Norfolk and is one of the most fascinating and historically important monastic sites in England.

St. Benet’s Abbey is the only Norfolk abbey built in the Anglo-Saxon period that continued to exist during the Middle Ages. The only abbeys in East Anglia with a reputation close to St. Benet’s Abbey were at Bury St. Edmunds in Suffolk and Ely in Cambridgeshire. 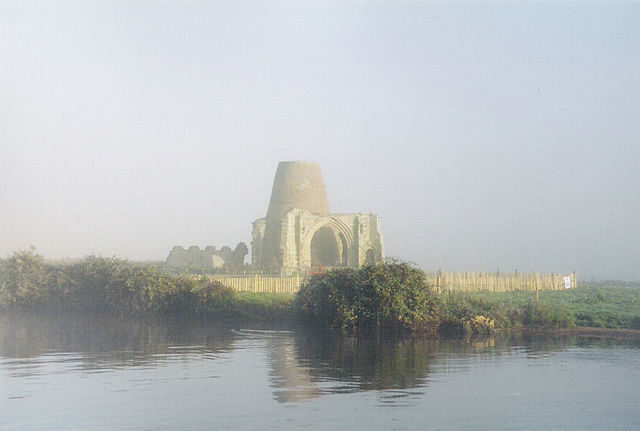 The birth of St. Benet’s Abbey is shrouded in mystery. It seems that nothing in this marshy and tidal terrain could survive for long. However, there are a number of historical documents that can be pieced together to uncover its story.

Norfolk was at the peak of its influence and wealth in the 12th century and the abbey profited well from these conditions, becoming a very powerful religious center. 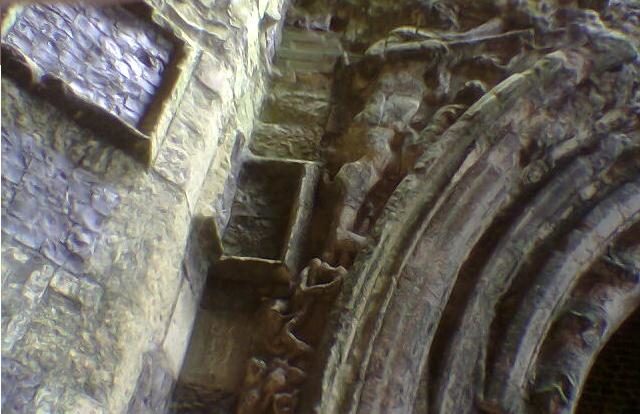 Carved detail on the gate, now inside the remains of the drainage watermill/ Author: IanOfNorwich – CC BY-SA 3.0

The abbey was built around 1020 by King Cnut on a small island encircled by marshes. It seems the king already knew of the sacred significance of the location; archaeological discoveries show that the site had been inhabited by Christian hermits since the 9th century. According to a 14th century document written by an anonymous author, the site was first occupied by a hermit named Suneman, who erected a chapel dedicated to St. Benedict at the beginning of the 9th century.

His simple life and devotion to God attracted other hermits. The peaceful community ceased to exist at the end of the 9th century when it was destroyed by the Danes. In the middle of the 10th century, it was reoccupied by another hermit, Wulfric. With the help of 7 other hermits, he reconstructed the church and founded a community that lasted no more than half a century. 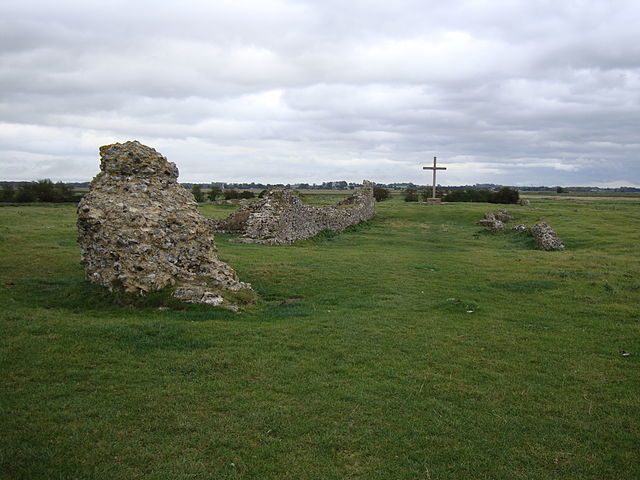 The remains of the church nave, looking toward the high altar and the modern oak cross/ Author: JohnArmagh – CC BY-SA 3.0

King Cnut heard of the community during his stay in the nearby village of Horning. He helped the monks by granting them with three of his manors: in Neatishead, Ludham, and Horning. This generous act marked the official start of the abbey, although it had existed long before his reign. Although it appears as though the abbey’s history is a mix of fact and fantasy, crucial parts of the story are validated by 13th century sources based on lost documents. 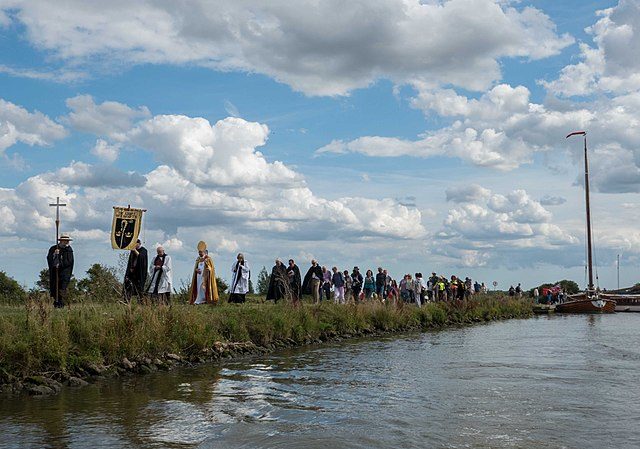 The Bishop of Norwich arrives by wherry at St Benet’s for the 2017 annual service held every first Sunday of August/ Author: Roger green – CC BY-SA 4.0

Construction of the buildings, including the first stone church, began during King Cnut’s reign in the early 11th century by Abbot Aelfsige. It was further enlarged in the 12th and 13th centuries and finally completed in 1274.

The complex was encircled by a ditch and an earthwork wall. The abbey acquired the right to become fortified with an outer defensive wall in 1327. Parts of this wall survived the passage of the time and can be seen today within the earthwork wall. 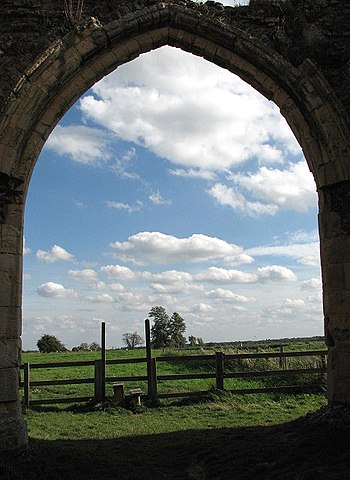 View through the east doorway of the gatehouse/ Author: Evelyn Simak – CC BY-SA 2.0

In 1075, one the abbey’s most powerful patrons, Ralph Gauder, Earl of East Anglia, was the leader of a revolt against William the Conqueror. The revolt failed and Gauder’s properties were given to Roger Bigod. Bigod favored the Thetford Priory over St. Benet’s Abbey and as a result, the abbey suffered financially.

It was still a wealthy religious center with estates throughout Norfolk but struggled to compete in religious influence without the relics of a well-known saint. Bury St. Edmunds Abbey, by comparison, attracted many pilgrims because of its shrine to St. Edmund the Martyr. 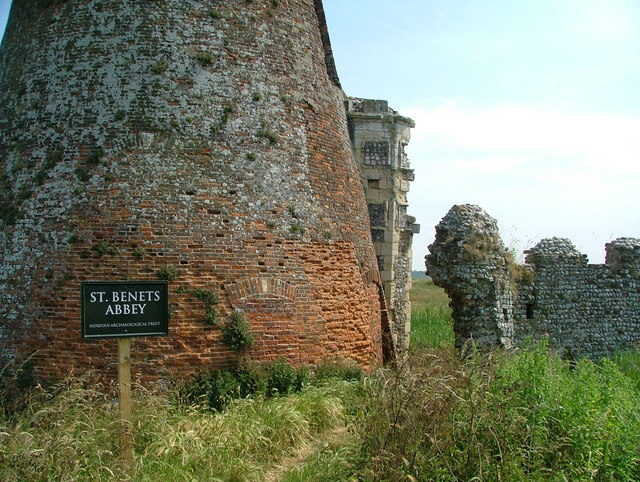 The Norfolk Archaeological Trust is the owner of the site/ Author: PAUL FARMER – CC BY-SA 2.0

Perhaps the most dramatic event in the abbey’s history happened in 1381, with the Peasant’s Revolt. Local peasants and tenants of the Bishop of Norwich attacked the abbey, destroying documents which gave the abbey permission to demand them to work for free. They burned the documents in front of the gateway. 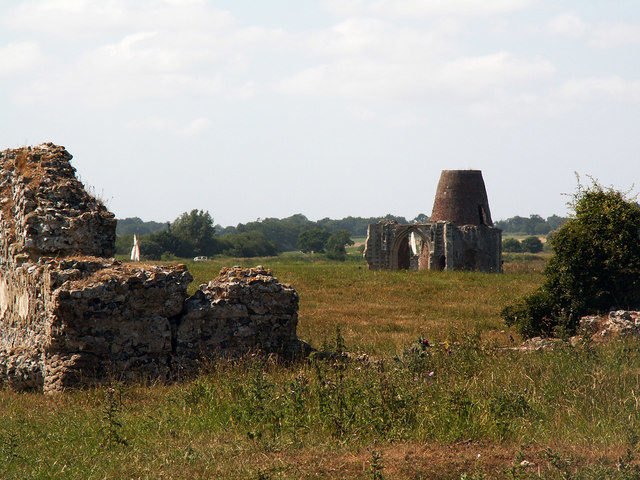 The abbey never became very large and it had no more than 30 monks. Periodically, servants and lay brothers also stayed in the abbey, often in order to help the monks with the maintenance of the fish ponds, which are one of the best-preserved medieval fish ponds in England.

In medieval times, the abbey managed the large peat diggings which helped to create the Norfolk Broads. The low-lying area was constantly flooded and in 1287 the abbey itself was also flooded. The outer buildings became reachable only by boat and for a short period of time, the church was used as a stable for horses. 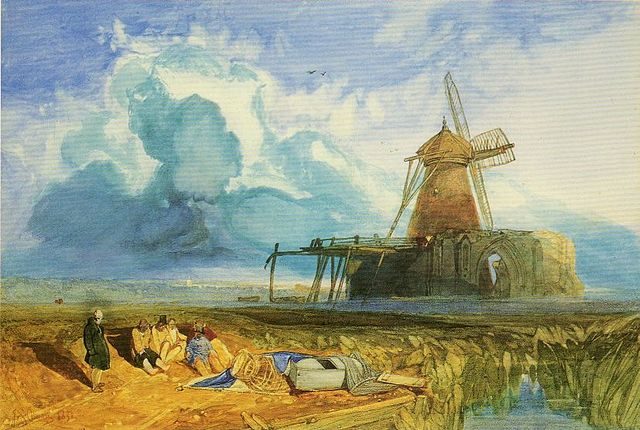 Interestingly, it is claimed that St. Benet’s Abbey was the only abbey that wasn’t officially closed during the Dissolution of the Monasteries ordered by Henry VIII. Instead, the king exchanged it for lands owned by the Diocese of Norwich and it was amalgamated with the Diocese.

Nevertheless, in 1545 it was abandoned, mainly because of its remote location. It was never suppressed and even today the Bishop of Norwich has the title of Abbot of St Benet’s. There is still an annual service at the site, held at the ruined high altar, where a large modern wooden oak cross has been erected. 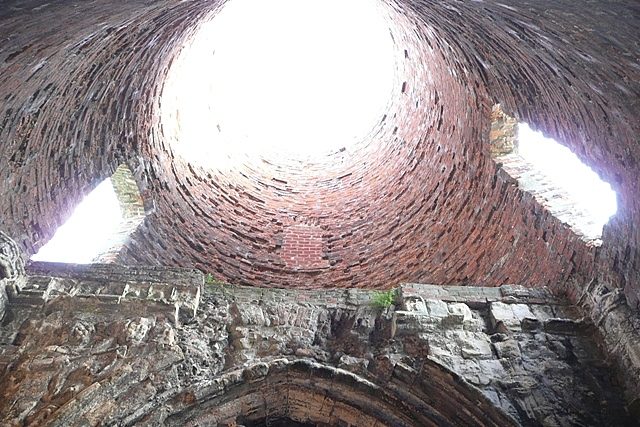 The top of the mill and parts of the gatehouse incorporated into the new building/ Author: Graham Horn – CC BY-SA 2.0

At the end of the 16th century, the abbey’s structures were razed and the stone was used for the construction of other buildings, such as the Duke of Norfolk’s palace in Norwich. The neighboring marshes were drained at the beginning of the 18th century and the ditch served to carry the water away. A drainage windmill was constructed at the eastern side of the ditch. 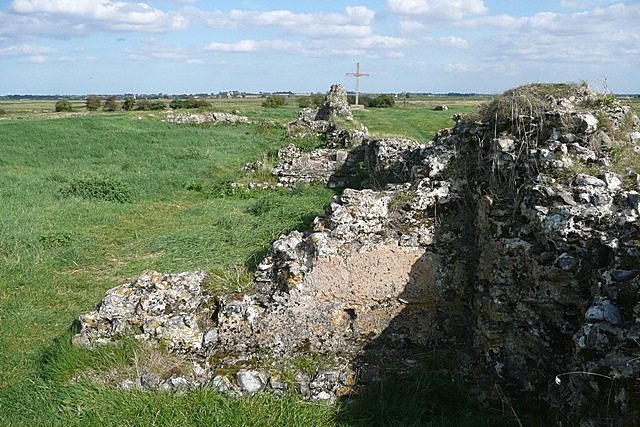 Sections of a wall behind the nave/ Author: Graham Horn – CC BY-SA 2.0

The only structure of the abbey that remains almost intact today is the impressive 14th-century gatehouse. At the end of the 18th century, parts of the gatehouse were incorporated into the new drainage windmill. In 1863, the mill sails were blown off and since then the mill and the gatehouse serve only as picturesque ruins.

The site has provided inspiration for many artists and is an iconic sight for sailors on the Broads. Only small parts of the church – the nave and the transept wall – are still recognizable. The south wall has been reduced to a pile of rubble. 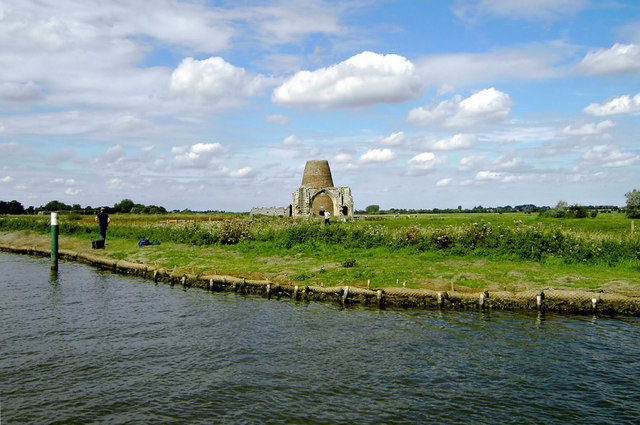 One of the most recognizable landmarks in Norfolk/ Author: Richard Robinson – CC BY-SA 2.0

The Norfolk Archaeological Trust is the current owner of the site. Although many important traces remain buried in the ground, the surviving parts and remains of the earthwork provide insight into the region’s past.

« Today, SS Andrea Doria rests at the bottom of the ocean
RMS Mauretania: The fastest and largest ocean liner of its day »