There are breathtaking old trees in many parts of the world with unusual shapes and sizes which look like they came straight out of a fairy tale. The majestic giant known as the President in California is maybe the biggest one of the oldest trees, and the 1,000 years old Angel Oak in South Carolina is the most gorgeous because of its lush branches that go underground.

But, speaking of fairy tales, there is a “kingdom of the trees” in Cambodia which is one of the most remarkable places on earth. The abandoned Ta Prohm Temple in Angkor is embraced by the biggest trees in the ancient city, so tight that it looks like no tower or a corridor on the site can ever collapse.

The temple is part of one of the greatest structures ever built in the world known as Angkor Wat. Built by King Suryavaram II, at first it was a Hindu Temple. In the middle of the 15th century, it was converted into a sanctuary dedicated to the Buddha.

King Jayavarman VII  built Ta Prohm as a gift to his mother, and at  first, it was known as Rajavihara, meaning “Monastery of the King.” According to legend, the king’s mother was buried in the temple and her tomb was surrounded by four big walls made of diamonds. 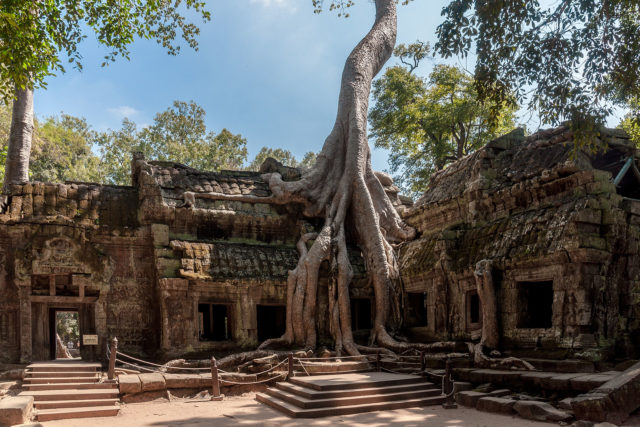 The temple is part of Angkor Wat, one of the most mesmerizing structures ever built. Author: CEphoto, Uwe Aranas. CC BY-SA 3.0

Ta Prohm is the largest structure in the Angkor complex. It contains several towers connected with passages that go into the center of the monument. These passages are the only part of the temple that has been cleared for tourists, and the rest of the construction is left untouched. 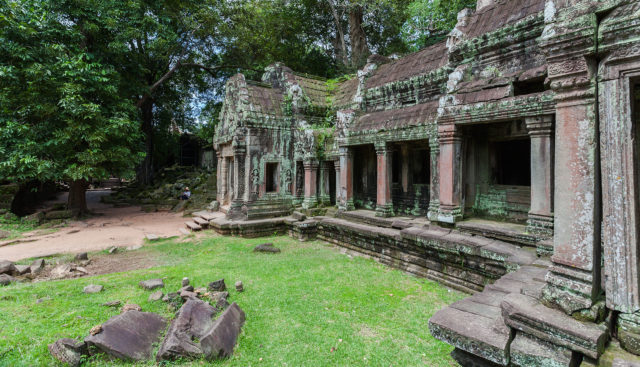 It was built by King Jayavarman VII as a gift to his mother. Author: Diego Delso. CC BY-SA 3.0

There is a stone with Sanskrit inscription in the middle of it which provides details about the construction and how many people and priests lived there. There are also numbers of how many precious stones, diamonds, and gold were in the temple and some historians say that maybe this was exaggerated just to glorify the king. 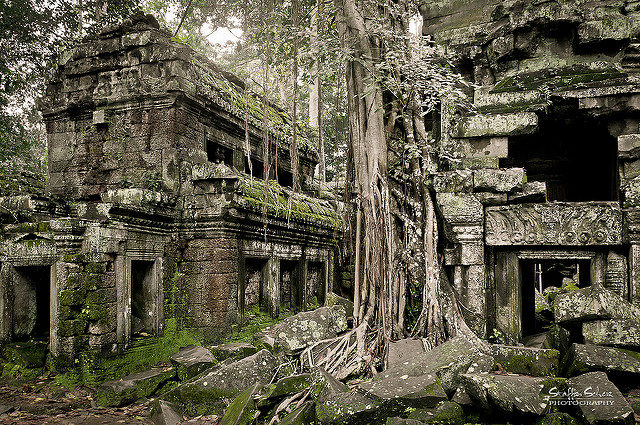 It is the largest temple in the Angkor complex. Author: Staffan Scherz. CC BY 2.0

On some of the enclosures, there are reliefs carving which depict scenes from the life of the Buddha made in the 12th century. One of them tells the story of Prince Vessantara from the Buddhist Jataka Stories, the story of a previous life of Gautama Buddha who gave away everything and abandoned his palace to live a life of meditation. 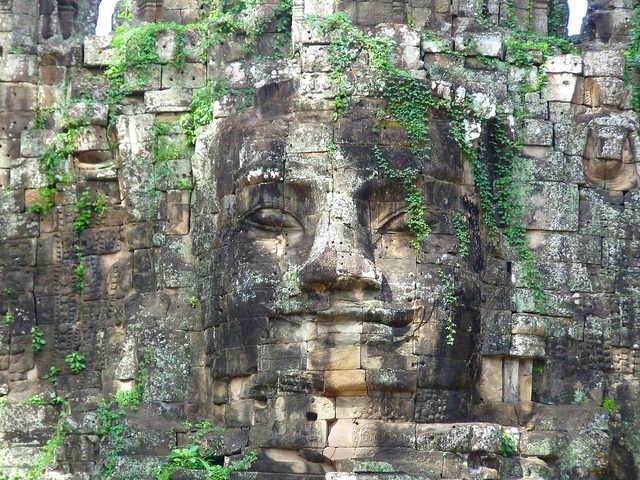 It is a fascinating monument carved with many reliefs and sacred inscriptions. Author: michael clarke stuff. CC BY-SA 2.0

There are many other reliefs and sculptures in the Ta Prohm temple complex but most of them were partially destroyed when the King Jayavarman VIII accepted Shiva, the supreme god of Hinduism and converted to Shaivism. In 2001, the temple served as a filming location for the movie Tomb Raider and shortly after its premiere, it attracted millions of visitors to go and see this magnificent place. 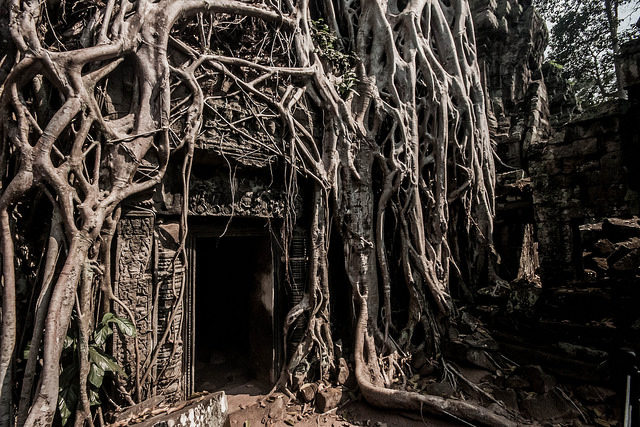 After serving as a filming location for the movie Tomb Rider, the temple became even more popular. Author: Aditya Karnad. CC BY 2.0

There is a scene where Lara Croft (played by the actress Angelina Jolie) stood upon one of the biggest trees and was sucked beneath the old structure covered by its roots when she picked up a jasmine flower. It is known as The Tomb Raider Tree and is the most famous spot in the temple for visitors. 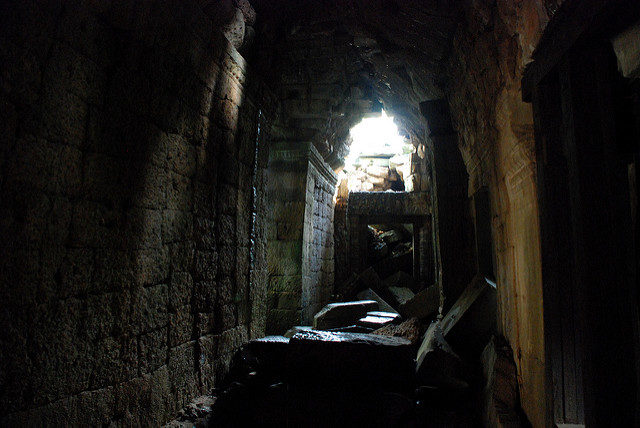 Inside one of the structures at the temple. Author: Damien @ Flickr. CC BY 2.0

As mentioned before, being a part of the Angkor complex, the first building of the Ta Prohm Temple is not visible immediately from the main road. The best way to reach this abandoned tree kingdom is through a small path which leads to the lesser-used gates shrouded deep in the Angkor forest. With its giant trees looking like the Ents from Tolkien’s The Lord of the Rings books, Ta Prohm is for sure the most magical place in the world. It is considered to be one of the most mysterious sites that one can ever encounter.

« Gorgeous abandoned Eilean Donan Castle in the Highlands of Scotland
Quneitra, Syria: The ghost town which is still a combat zone »