Copán Ruins, Honduras: Once home to thousands of people, now it sleeps in untouched silence

Ancient Mayan settlements and religious centers are shrouded in epic mystery. Most of the sites of the lost Maya civilization are hidden deep in the jungle.

No one knows for sure when they were exactly erected or the precise reasons the cities were abandoned. Once highly organized and developed, the ancient cities of the Mayan people are now left to be slowly reclaimed by nature. One of these ruins is the ancient city of Copán.

The ruins of Copán are situated just 1 mile from the central district of the modern small village Copán Ruinas in the western part of modern-day Honduras, just near the border with Guatemala. The site is situated on the western side of the Copán River, surrounded by many hills rich with exotic trees. 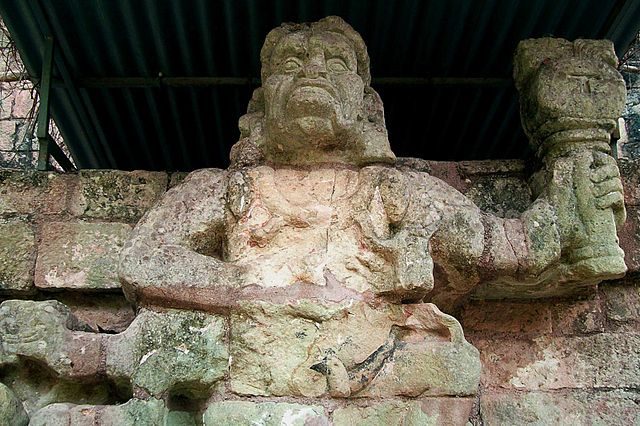 Over a thousand years ago, Copán was the heart of the Mayan civilization in the fertile Copán River Valley and culturally dominated the area. It was one of the most important centers of Mayan culture, and, in fact, the most southern city of all Mayan urban centers. The buildings are not so imposing as those in Tikal (situated in Guatemala), but many archaeologists and historians of art, as well a great number of visitors, consider Copán to be home to some of the most refined pieces of pre-Columbian art. The well-preserved stone sculptures carved with elaborate figures of kings, animals, and anthropomorphic deities, the Hieroglyphic Stairway engraved with long-forgotten hieroglyphics, the ball court, and the pyramids are some of the most spectacular features of the site. 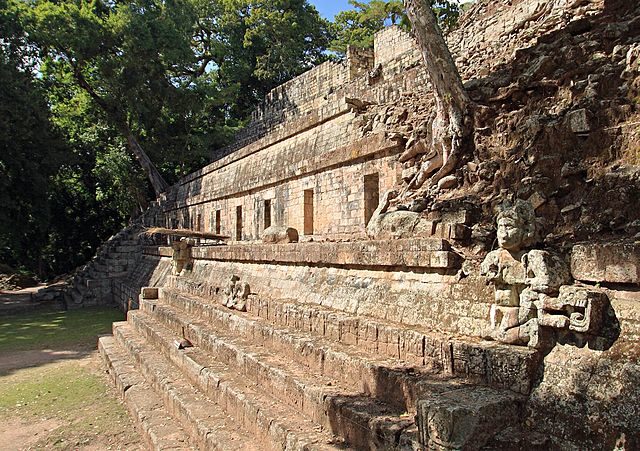 The West Court of Copán

The area around the ruins was probably first inhabited around 1000 BC. Initially, Copán was just a small farming community, which evolved into a flourishing metropolis over the centuries. The ideal surroundings, which were more than perfect for productive agriculture, attracted many people in the region. Copán started to increase in size and population. It became a place of regional significance during the Classical Period (250- 900 AD). Archaeological discoveries indicate that the major structures were erected between 400 and 800 AD. 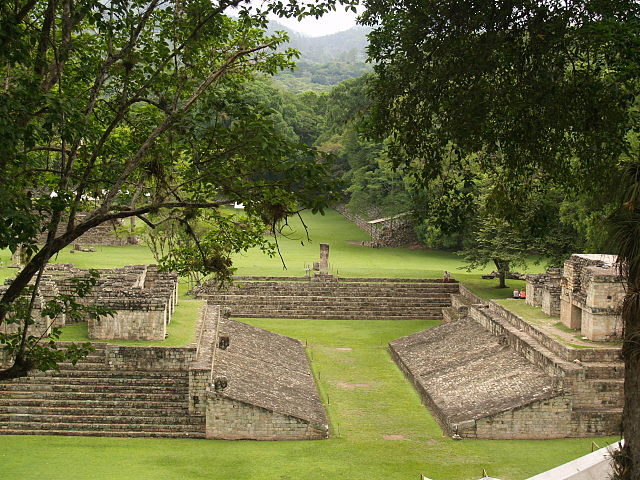 The final version of the ball court was dedicated to Uaxaclajuun Ub’aah K’awiil in AD 738. Author: Adalberto Hernandez Vega – CC BY 2.0

At its zenith in the beginning of 9th century, the city of Copán covered an area of 250 acres and was home to more than 20,000 inhabitants. A dynasty of at least 16 rulers successfully governed the city complex and the area. They defeated their rivals in the region and took control of the profitable trade in jade and obsidian. That was their great source of power. 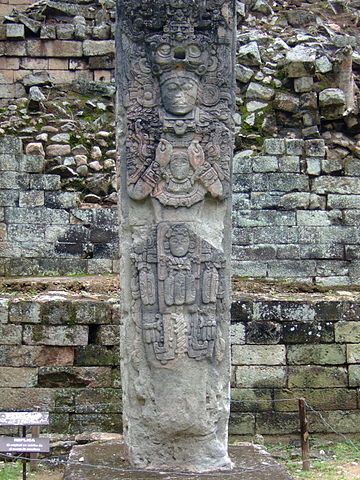 But, at the end of the 9th century, the population began to decline rapidly. Perhaps the main reason for the total collapse of Copán was the constant droughts that struck the region. Crucial crops were completely destroyed and the available food in the storehouses was quickly consumed. Empty fields meant empty storehouses, and empty storehouses meant empty stomachs. That forced those who survived the famine to leave their homes and move elsewhere. The site was completely deserted by 1200. 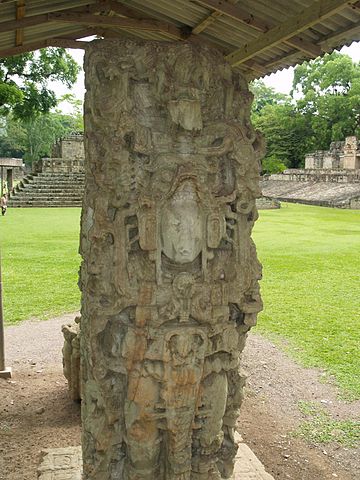 Copán is inseparably connected with another archaeological site located approximately half a mile away, known as Las Sepulturas. Copán was built for the kings, priests, and high nobility, and the residential buildings at the Las Sepulturas were for other aristocrats and other prominent inhabitants. The entire complex, which remains largely unexcavated, has more than 4,500 structures. 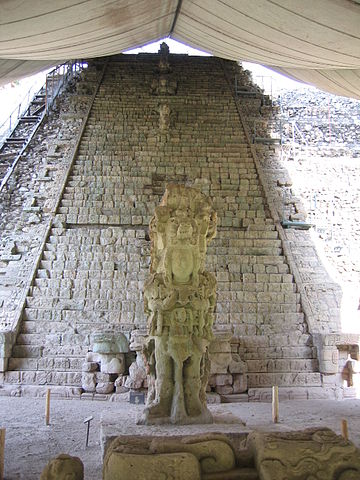 The most important of the structures are located at Copán. At the central part are several temples, two pyramids, a few stairways, plazas, and a ball court for the game tlachtli. The court is the second-largest of its kind in Central America. Most of the buildings are constructed on a raised platform. 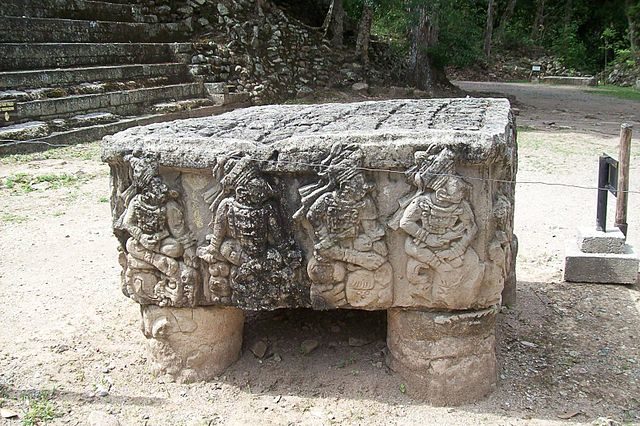 At the site, new temples were built on top of older ones. Thus underground tunnels were formed beneath the temples. Most famous, and also open for public, are two tunnels: the Rosalina Tunnel and the Jaguar Tunnel. But the site is famous worldwide for its many carved sculptures, known as stelae, which depict the kings of Copán. These unique monuments are the symbols of the site. 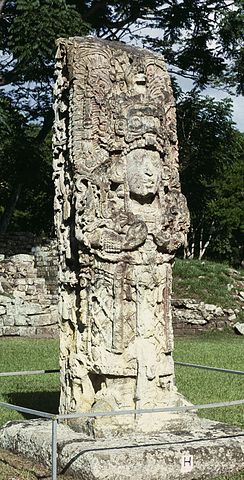 The figure stands on the front side, and on the other side are the carved hieroglyphs that show the life and deeds of the portrayed king. The most renowned of all structures is the Hieroglyphic Stairway. It has 63 steps leading to one of the temples. Its name comes from more than 2,000 carved hieroglyphic symbols placed on each side. It is believed that this temple was used for measuring the seasons. 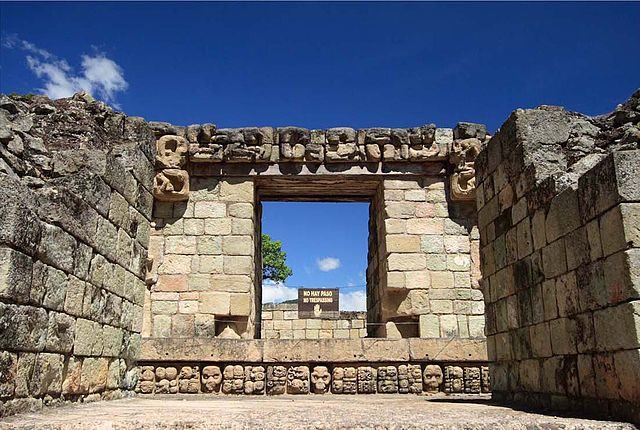 The interior doorway of Structure 10L-22

Copán was rediscovered by the Spanish conquistadors at the end of 16th century. The first serious scientific research on the site happened in 1975. The site has been part of the UNESCO World Heritage List since 1980. Vegetation has overgrown large parts of the ancient city, but its entanglement with nature is now an indispensable part of its character.