Grünau is a town in Berlin, Germany, where two famous but now abandoned ballrooms reside: the Ballhaus Riviera and the Gesellschaftshaus Grünau.

In the 19th and 20th centuries, the population of Berlin was growing, and Grünau was developed to cater to their various tastes. It became a famous venue for water sports.

In the summer of 1880, three local rowing clubs came together to hold the Grünau regatta, which steadily grew into a regular event. In time, crowds of about 50,000 people would gather in the town to attend the regatta.

The first Ballhaus Riviera Ballroom was built in 1890 as a venue for dancing and drinking. The Riveria boasted several halls as well as an open-air restaurant with palm trees. The Riveria invited famous musicians to play, and it became popular almost immediately after opening.

The opening of the second dance hall called the Gesellschaftshaus Grünau took place in 1898, one year after construction had been completed. The complex was made up of two buildings which included a ballroom that was nine meters (almost 30 feet) high.

With two dance halls to its name, Grünau began to attract famous people not only from Germany but also from all over the world.

In addition to dancing and various parties, Grünau continued to be well-known for its water sports – so much so that, in 1936, the Summer Olympic Games were held in Berlin. Water sports played an important role, and famous international guests visited Grünau during the Olympic Games.

The dance halls were so important to Grüna that in 1977 they were given protected status. However, by the 1980s, ballroom dancing was no longer a favored pastime and had been replaced by discos.

The population of Berlin began to grow rapidly at this time, and new residential areas started to appear alongside entertainment venues. As a result, in 1991, both dance halls were closed.

After the buildings were left unattended, there were some potential investors with plans for the construction of residential apartments or hotels. However, nothing came of these plans.

After some political changes during this period, the buildings became the property of the federal government, and the town of Grünau was responsible for the conservation of the premises from 1991.

The abandoned halls were mostly forgotten about and left at the mercy of vandals until 2006 when the site and all buildings were sold. The buyer was a Turkish entrepreneur from Ankara who had plans to build a hotel on the site.

However, the demolition permit was rejected due to the protection of the buildings.

Residents interested in protecting the dance halls collected 3,000 signatures on a petition demanding the owner take measures to protect the buildings from fire and vandalism. Unfortunately, the city council could not get the owner to upgrade the buildings.

It is believed that the owner deliberately did not take any action because, without any changes or improvements, the buildings would soon collapse and he could go ahead with alternative plans.

In 2014, the district office wanted to carry out repairs and invoice the owner for the amount of 40,000 euros. They intended to repair the roofs as well as replace doors and windows.

After some legal wrangling, the owner finally took measures to prevent further deterioration of the buildings, although his measures were several times cheaper than those the district office had planned.

Eventually, in 2017, the purchase agreement with the Turkish owner was repealed, and a new investor, Terragon Projekt GmbH, took his place. The new investor’s plans included the construction of a home for the elderly consisting of four buildings.

It is anticipated that the new building will offer high-quality housing for the elderly, and the investor’s plans would cost 80 million euros. Construction is planned to begin in 2019 and complete in 2021.

On July 16, 2019, there was a nighttime fire at the premises. Around 70 firefighters attended, but they could only extinguish those fires near the outside because the ruins were in danger of collapsing.

Consequently, all the wooden parts from the basement to the roof burned down. At that time, an investigation was launched against two 20-year-old suspects. Despite this setback, the investor has confirmed his desire to complete the project by the planned date of 2021. Massive thank you to coralbeetle on Flickr 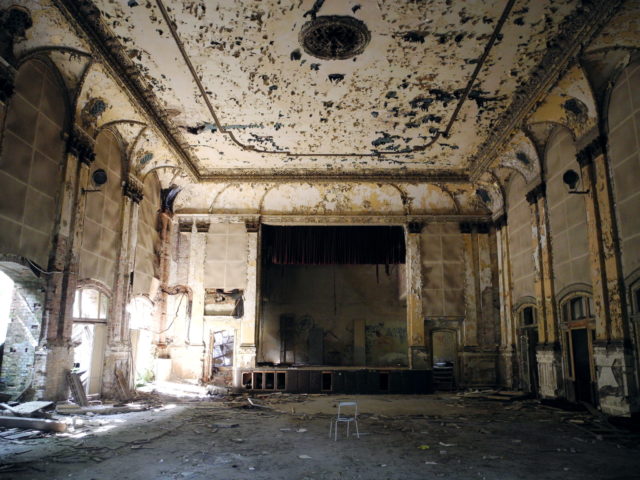 Another Article From Us: The Amazing Bodie – one of the best preserved ghost towns in the West