Built for one purpose only (conspiracy theories like the mind control concept), this Soviet over-the-horizon (OTH) radar system served as an ABM (anti-ballistic missile) early-warning network. It served the Soviet Union from July 1976 to December 1989.

Two of these radars were deployed, one in Chernobyl and the other in eastern Siberia. It might sound simple but the only thing this radar did was producing a repetitive tapping sound at 10 Hz. The Russians quickly came up with a nickname; they thoughtfully named it the Russian Woodpecker.

But this OTH radar was so powerful that interfered with legitimate broadcasts, oceanic and aviation communications, amateur radio, utility transmissions, and so people worldwide started to complain.

This signal was so nerve-wracking that the amateur radios and televisions integrated “Woodpecker Blinkers” into their electronic circuitry in order to filter out the interfering signal.

Before this official Duga radar, there was experimental Duga radar that successfully detected a missile launch at Baikonur Cosmodrome some 2,500 kilometers away. Next was the second Duga prototype that was powerful enough to detect submarines in the Pacific Ocean and missiles launched toward Novaya Zemlya (an archipelago in the Arctic Ocean in northern Russia and the extreme northeast of Europe).

These two prototype radars were considered “low power” but with the concept proven, the official Duga was ready to be deployed. Once operational, NATO and amateur radio hobbyists by means of triangulation managed to locate the signal coming from (at that time called) Ukrainian Soviet Socialist Republic.

NATO chose another name for this contraption – STEEL WORK. At least this is the official name, the rest of the reports are logically classified.

This was food for thought for the conspiracy theorists, which came up with stories like jamming western broadcasts, submarine communications and unavoidably mind control.

Though the conspiracy theorist can never rest the public became (as official reports came) aware that it was over-the-horizon radar.

By the 1980s the signal became less frequent and sometime in 1989, it disappeared completely. No official statement was made as to why the radar was shut down though speculators believed it was the changing strategic balance that came with the end of the Cold War.

The complicated satellite network that began to exist in the 1980s played a major role in early missile detection thus reducing the need for over-the-horizon radar. 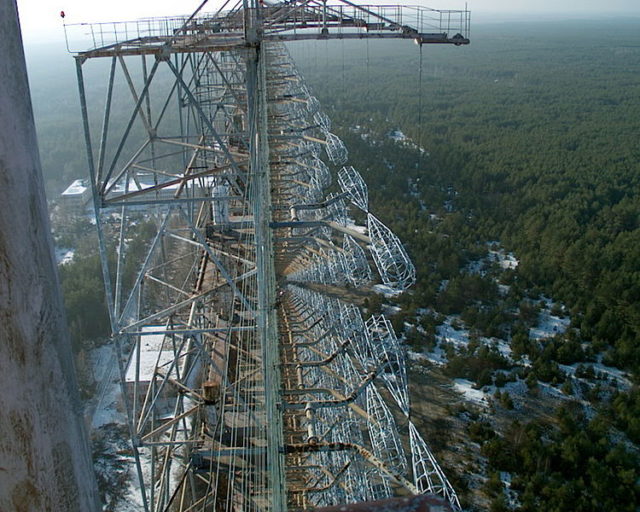 From the initial shutdown to this day the radar is completely abandoned and sometimes used by amateur radio hobbyists as a transmission tower. Its size serves as an inspiration for surreal photographs taken continuously by photographers worldwide.

« Merv: Was the Largest City in the World in the 12th century
Desolate Locations That Made the Star Wars Sagas Possible »