The former Hara submarine base is located in the Lahemaa National Park in Tallinn, Estonia.

Once Hara belonged to the Soviet Union. Soviet bases were specially built in the wilderness far from civilization.

The construction of the submarine base was completed in September 1953 by the Russian military. The existing Laheema National Park is located on the Umina Peninsula in Estonia, 65 kilometers (40 miles) east of Tallinn. 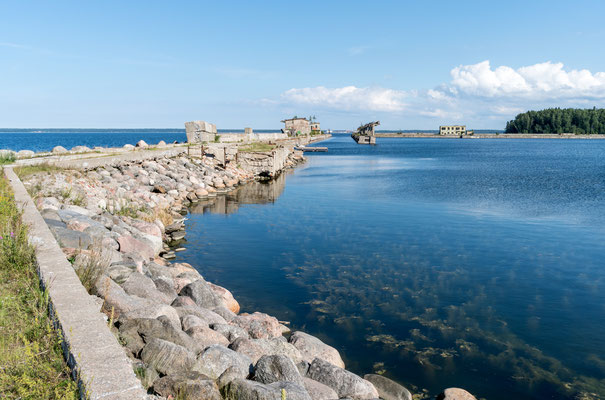 The base was built as a secret site for the demagnetization of submarines and was given the name Military Unit No. 53083. The Soviet Union kept this place secret and closed to the public.

During the Cold War, many employees worked at this facility, performing the complicated procedure of underwater demagnetization. There were very few bases in the Soviet Union which could carry out this work.

The demagnetization procedure was created to make submarines less susceptible to sea mines. Submarine hulls are magnetically loaded due to the Earth’s magnetic field. The base contained a special installation for demagnetizing boats which would then allow the vessels to seamlessly cross the Baltic Sea.

Base number 53083 worked until the collapse of the Soviet Union in 1991. After the collapse, Estonia became an independent country. The Russian people who worked at the base quickly abandoned it, leaving behind only the concrete foundations. Most of the facility was dismantled, given its secret, military nature.

Since then, the site has been derelict and unusable. The buildings were destroyed, although some can still be entered. A plate outside informs visitors that the base is in a state of disrepair and they should enter at their own risk.

The ruins now resemble a pier, and the huge structure of Hara is covered in graffiti. Any structures remaining, such as stairs and chains, are rusted by the weather.

In 2018, the Estonian Heritage Society announced that the area is a unique military site on both an Estonian and global scale.

Currently, the condition of the Hara submarine base is only deteriorating due to the Baltic winds. It belongs to the company Hara Sadam, which wants to convert the facility into a harbor. Big thank you to Jens Assmann

Another Article From Us:  What Was The Chanute US Air Force Base