Slightly Surreal: The underwater church can be accessed during a drought

Often, when I think of abandoned places, I instantly imagine how they used to function, their purpose, how they were once part of some pulsating times, and how suddenly all of that stops and they are left to testify for some mysterious past.

Saint Nicholas church was the former main church in the village of Mavrovo, and it sits in the Mavrovo Lake in Macedonia. Today, the object is mostly submerged by the waters of the lake.

It was built in 1850, and in 1953, with the construction of the hydro system, the church got completely under water. However, now, in the periods of drought the church is dry and can be visited. 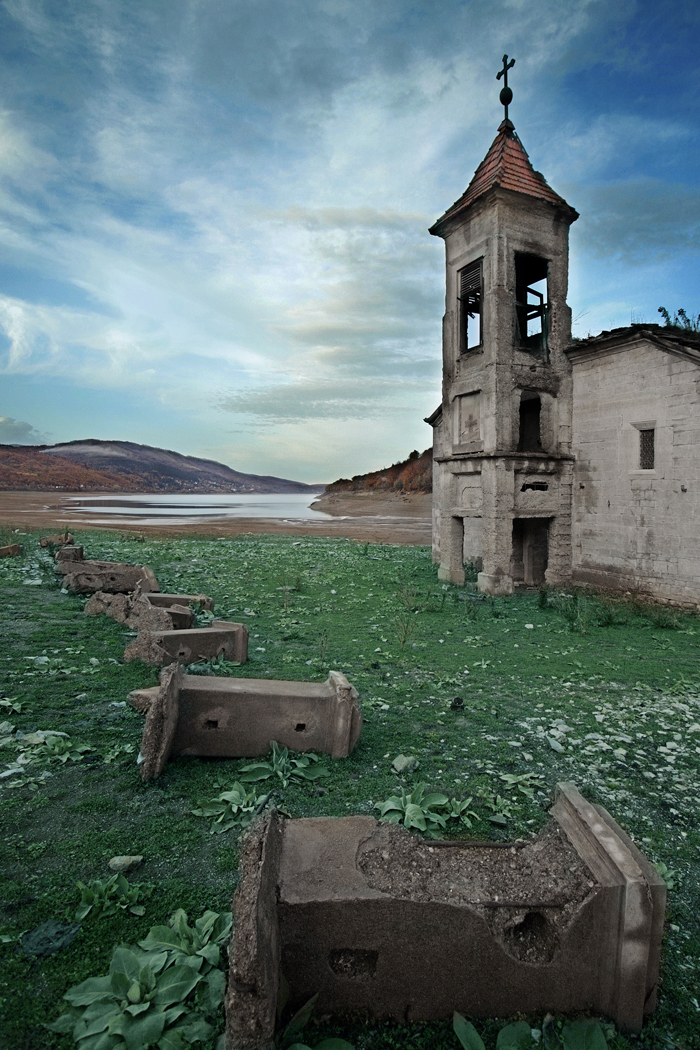 St Nikola Church in the village of Mavrovo, Republic of Macedonia. Author: Sanja Nikolic CC BY 2.0

Though mostly submerged in the waters, the church has still preserved its look. The building itself and the bell tower still exist, though the interior is mostly destroyed.

The church was built by the local workers from Reka, a region in Western Macedonia. The construction started in 1850 and was finished by 1857. The church was in  a great shape for 103 years. The locals say “It was built with best quality marble and granite, had a recognizable marble altar and iconostasis, and the icons were made by the great Dico Zograf.”

View of the village of Mavrovo. Author: Petrovskyz CC BY-SA 4.0

In 1952, several parts of the old villages sunk under water, and among those houses was the church as well. As Mavrovo Lake started to be created, the icons and the other items from the church were moved to the smaller church which is located across the lake.

During the ‘flood’, the wooden iconostasis, books, icons and some other valuable items were lost, but luckily they were later found and conserved.

The mysterious part is that all the other buildings and homes from the area were totally destroyed, but only the church remained.

St. Nicholas Church still has the same appearance as always, except that it is now submerged. There were times when the church was completely under water but began to soar with the droughts in the early 21st century.

Today, during the summer, the lake is at a lower capacity so that the church can be visited.

There is an ongoing project for the protection of the building as part of the architectural and cultural heritage. The church would preserve its original form, only the walls and the roof structure would be repaired.