The Story Behind This West Virginia Ghost Town

The year 1873 saw the founding of the town of Thurmond in Fayette County, West Virginia, USA. It is situated next to New River Gorge and Beury Mountain.

William Thurmond chose to make this area of natural beauty his home in 1844, founding the settlement that would go on to be named after him. During the Civil War, he was a captain in the Confederate army. He surveyed the land in that area and, in return for this service, was given the option to buy 75 acres of it for just $20.

In 1873, the Chesapeake and Ohio Railway was built across the gorge. The area was rich with coal reserves, so coal came from trains across the New River basin.

People gradually joined Thurmond’s settlement until it became a bustling town. However, this place wasn’t formally incorporated as a city until 1900, when it was named after its founding Confederate captain.

In 1892, Thomas J. McKell acquired Dunloup Creek and built a level crossing there. McKell was one of the shareholders of the coal company Glen Jean. After his purchase and investment, the settlement became even busier and developed rapidly into a center of commerce.

Eventually, the city boasted a post office, two banks (one run by the Thurmond family, the other by the McKell family), a telephone company, restaurants, a meat packaging plant, and shops.

Initially, all activities in the town were supervised by Thurmond himself – something which was possible because only a few people lived there. However, things began to get out of his control as the population grew and after McKell became an owner of nearby land.

Thurmond banned alcohol being served in his territory, including at his hotel. But in 1901, McKell built a 100-bed hotel called the Dun Glen in which alcohol was offered for sale.

Before it burned down in 1930, the Dun Glen hotel is reputed to have been host to a 14-year-long poker game.

Before 1921, the main form of transport was the railway. However, in 1921, a road was built across the New River.

In 1930, the population of the city had risen to 500 people. In the following decade, the Great Depression occurred. In addition, America began to rely more on roads than the railways and also other forms of power beyond coal – both of which proved to be significant blows to Thurmond’s prosperity.

From 1931 onwards, various businesses and institutions began to close: Thurmond’s bank (McKell’s didn’t close but was moved), the meat packaging plant, and the telephone office. The closure of the coal mines led the city into its final decline.

In 1968, Wildwater Unlimited was founded, offering commercial whitewater rafting, and the business has developed ever since. After the river and its surroundings became protected as a national park, many visitors and tourists began visiting the city.

Unfortunately, in 1984, the railway departments were closed. In 1992, the National Park Service secured funds to rebuild the city, although these plans were disrupted a year later, when there was a severe fire in one residential building.

The historic city has now been added to the US National Register of Historic Places. According to the 2010 census, the population of the city is five people, all of whom are members of the city council: three council members, one mayor, and a city registrar.

With an area of 0.23 square kilometers (2.48 square feet), Thurmond is the smallest city in West Virginia.

Thurmond was also used as a filming location for a movie about the Battle of Matewan – not a traditional conflict but a coal miner’s strike that took place in West Virginia.

Although abandoned, this beautiful area has not been forgotten. The National Park Service works to conserve and protect the city and its remaining buildings. Visitors can find several well-preserved structures along the main street of the city, suggesting what this once-thriving town might have looked like. A big thank you to Bob and check out his awesome flickr page @bobistraveling 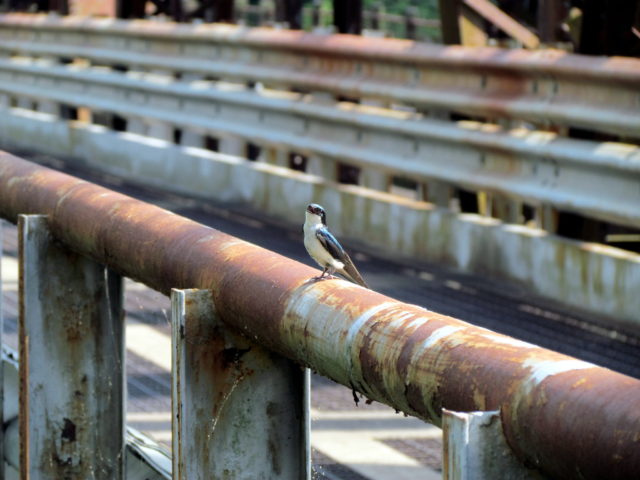