An Icelandic black sand beach called Sólheimasandur Beach is well known as the site of a mysterious plane crash that has become famous, largely due to numerous photos of the abandoned airplane being shared on the internet.

Thousands of curious travelers from all over the world visit this beach every year. The site is so atmospheric that a movie, several television commercials, and music videos have been filmed there. The pale plane can make a stark contrast to both the black sand and the fantastic Northern Lights that often dance in the background. 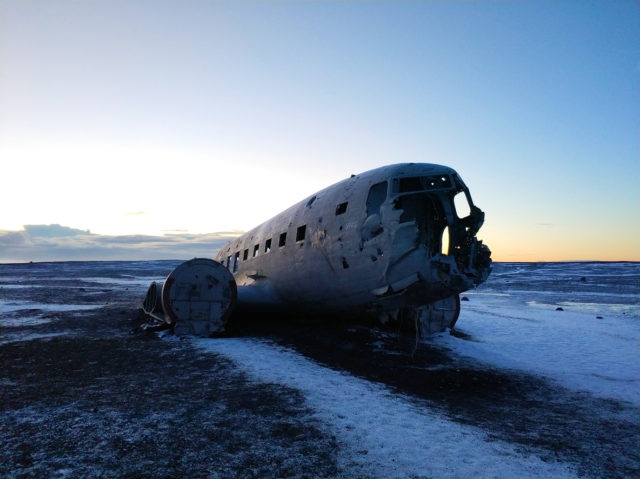 The aircraft in question is an American military plane, which made its final flight on November 21, 1973. Many websites refer to the plane as being a Douglas DC-3 Special, but it is, in fact, a Douglas C-117, sometimes referred to as a Super DC-3.

The Douglas C-117 was returning to Keflavik from the town of Höfn in southeastern Iceland. It had just supplied equipment to an American radar station in nearby Stokkses. The exact details of what happened during the flight aren’t known, and every website seems to offer a different variation of the facts. 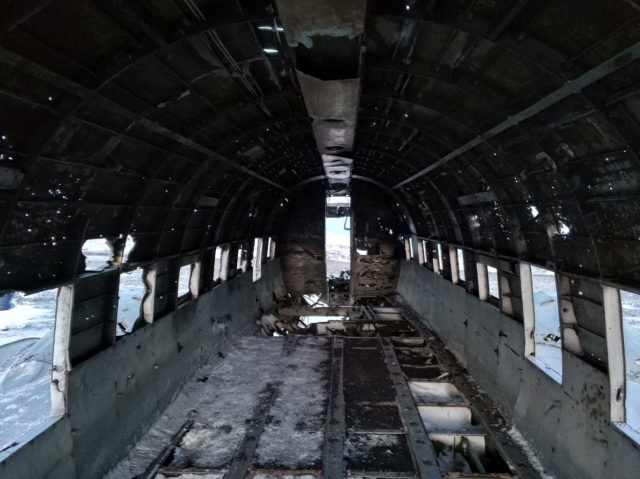 Some say that the main factor was the weather; others state that it was ice forming on the wings. However, it seems a sensible guess that the crash was at least partly caused by adverse weather conditions. In Iceland, the weather is completely unpredictable.

The most repeated theory suggests that the pilot, distracted by technical and weather difficulties, switched to the wrong fuel tank so the aircraft ran out of fuel. 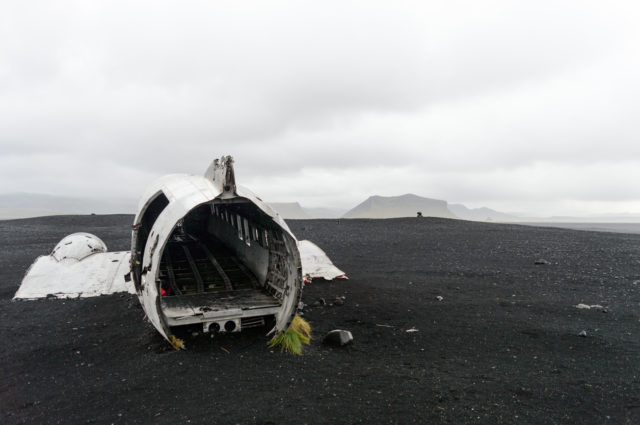 On November 21, the aircraft’s captain, James Wicke, and co-pilot, Gregory Fletcher, were caught in a storm and were facing both heavy fog and snow. Attempts were made to combat both the storm and mechanical difficulties that arose during the flight.

Suddenly, the aircraft’s engines shut off and the aircraft began to lose altitude. The pilots decided to make an emergency landing at sea. But when they managed to break through the dense fog, they noticed that they were flying over an area that resembled the surface of the moon. They were looking at Sólheimasandur Beach. 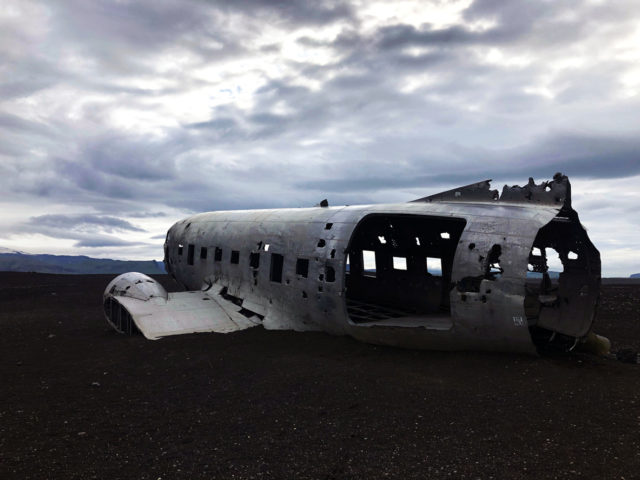 Instead of the sea-landing they’d planned, the pilots were forced to make an emergency landing on the southern coast of Iceland, using the beach as a runway. The plane came to rest 18 feet from the water.

There were five crew members on board. Fortunately, they all survived. They were distinctly worried that the plane might catch fire since the fuel tanks had been damaged during the crash, so they left with great haste. Nevertheless, they managed to take some things with them, such as a first-aid kit and an old radio.

Since the captain had sent a distress signal immediately after the aircraft had gotten into difficulties, preparations for their rescue had already begun by the time the plane crashed. The crew only had to wait an hour before an American rescue plane picked them up.

After the event, the captain was awarded an Air Medal Bronze Star for bringing the plane down with no casualties. 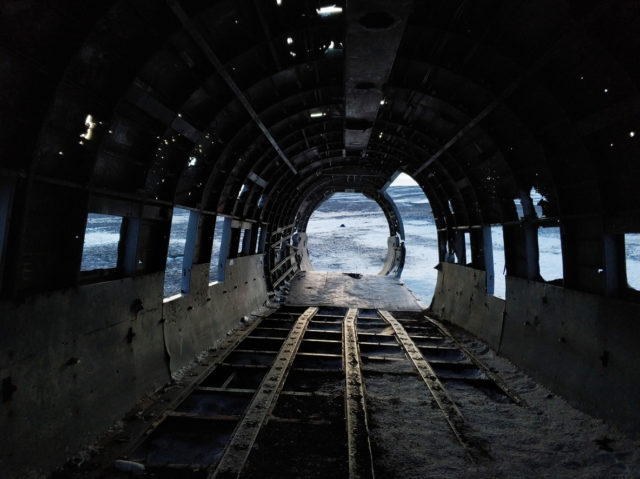 The US Navy decided not to recover the downed plane. Instead, they simply stripped the crash site of anything valuable or useful, then left behind an empty plane that began to rust away on the Icelandic beach.

Even in its derelict state, the plane ended up being used in a variety of ways by locals. One farmer used it for storage, while there are suggestions that another farmer detached and sold the entire tail section of the aircraft. A plethora of bullet holes in the metal indicates that it was also used for target practice. 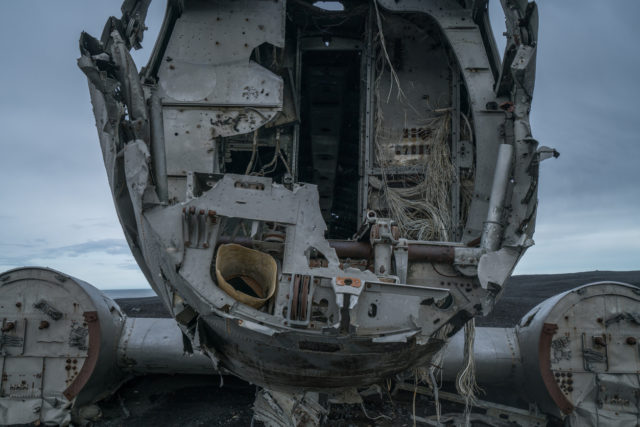 After the ravages of the years and the illicit use by locals, all that remains of the Douglas C-117 today is half of the two wings, the nose, and part of the fuselage.

Access to the site is via a stretch of soft sand. To begin with, many tourist cars got stuck there and were forced to wait hours for rescue because the area is so remote. In addition, inconsiderate drivers often damaged the surrounding vegetation as they drove to the site. 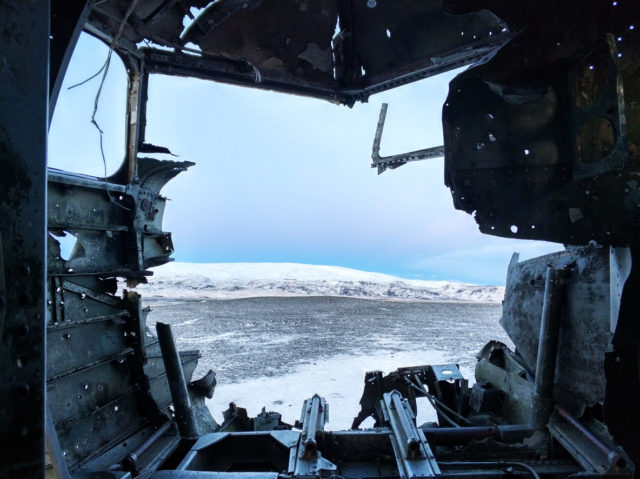 As a result, a decision was made to ban cars along that stretch of land and build a car park 2.5 miles away from the crash site to protect the local landscape. Now, Sólheimasandur Beach can only be reached on foot, and the journey takes an hour or two.

Another Article from Us: The Steam Train Graveyard: Used to be a secret location should war break out

Visitors need to be careful when choosing a time to visit the crash site. It is not recommended that people go there in winter or during bad weather because strong winds can cause sandstorms.