The Shakespearian Class steam trawler HMS Juliet was built in Yorkshire, England, by shipbuilders Cook Welton and Gemmel. Launched in 1940, she was owned for seven years by the British Royal Navy before being converted into a cargo vessel by Regent Coasters of London and renamed Peterjon.

In 1951 the boat was bought by the Limerick Steamship Company. Now under the name of MV Plassy, the cargo steamer was operated by them up until her dramatic end. And that heroic story happened in the early hours of March 8th, 1960. 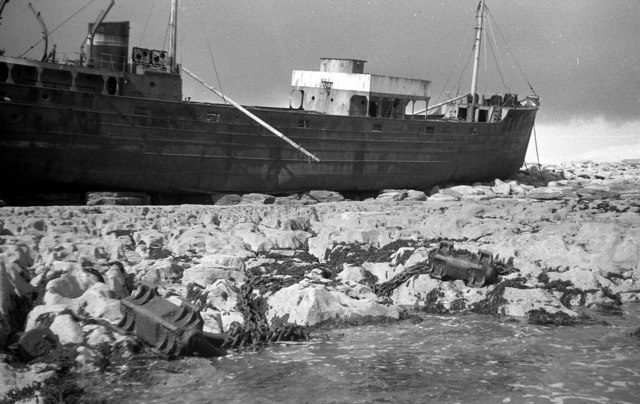 Almost sixty years ago the people of Inis Oírr were surprised by a night time guest that seemingly came out of nowhere. But they were wrong, for this traveler had a clear destination, but a wrong calculation led to what inevitably became it’s last journey. 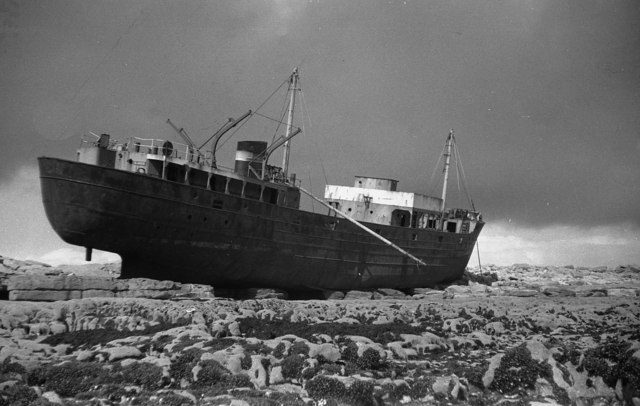 This lost voyager was none other than the steamer MV Plassy. She was sailing through bad weather in the Atlantic Ocean, off course, running too far north and close to Irish coast, when the weather changed for the worse. Now MV Plassy, laden with whiskey, stained glass, and yarn, was caught in the middle of mammoth waves that were tossing the ship in every possible direction. 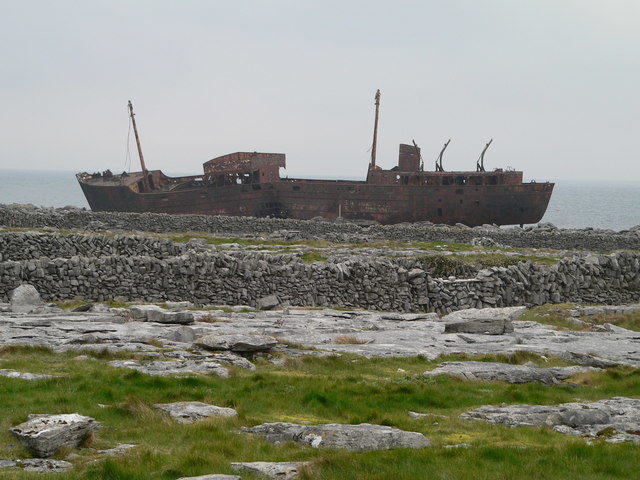 Powerless against the strong wind and waves, Plassy was driven towards Galway Bay and ran onto Finnis Rock. And this is how the islanders received their guest. The crew now found themselves helpless in stormy seas 5 miles from Gob na Curradh. Their hope for rescue lay with the Galway Bay lifeboat. 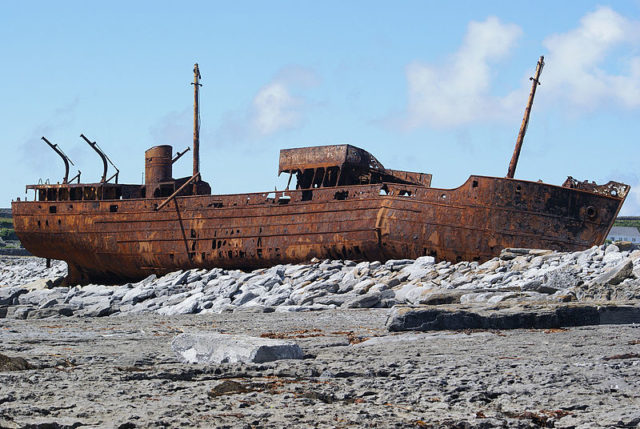 But that hope quickly faded once they realized that the lifeboat was already on a mission more than 10 hours away. A helicopter was quickly ruled out as an option, for if it would stand no chance against the storm. The mist was so thick that the islanders could barely see the stricken MV Plassey, even less so when the boat lost power. 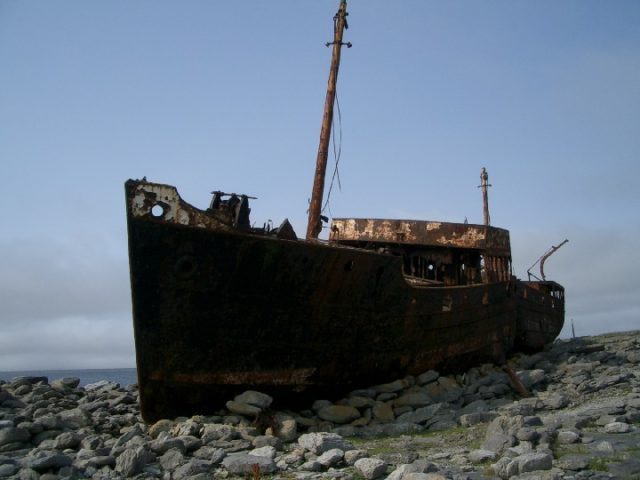 They watched as the crew was attempted to lower the lifeboat during a lull in the storm. Part of the crew got on the lifeboat but suddenly they saw the man climbing back up again. It was the wind. It was back. The lifeboat snapped off the rope and was lost. 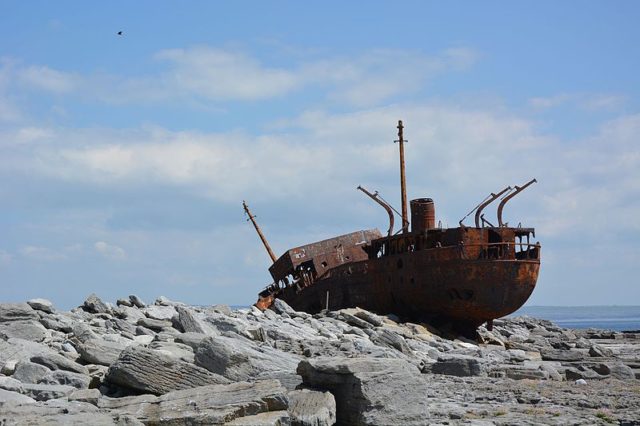 It was almost morning but the struggle was on. MV Plassey launched a distress flare and the people of Inis Oírr rushed to help. It was time for the island’s super heroes – the Insheer Rocket Crew – to put their rescue training into action. 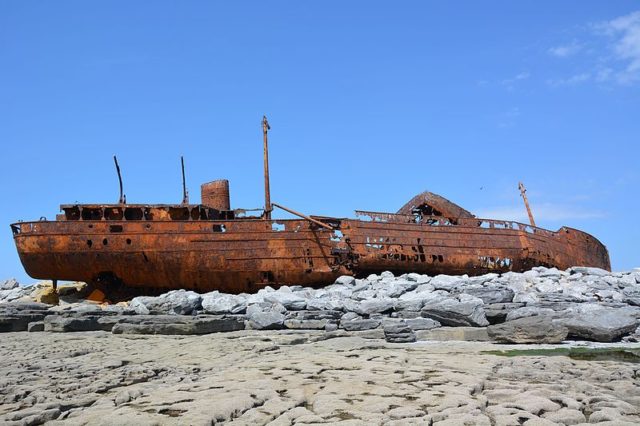 These brave men dragged the equipment by cart to the edge of the water. With them, they had three rockets and a breeches buoy, which is a very basic but effective piece of equipment. Basically, a lifebuoy with a leg harness fixed in the middle, suspended from a line which is fixed from the boat to the shore. 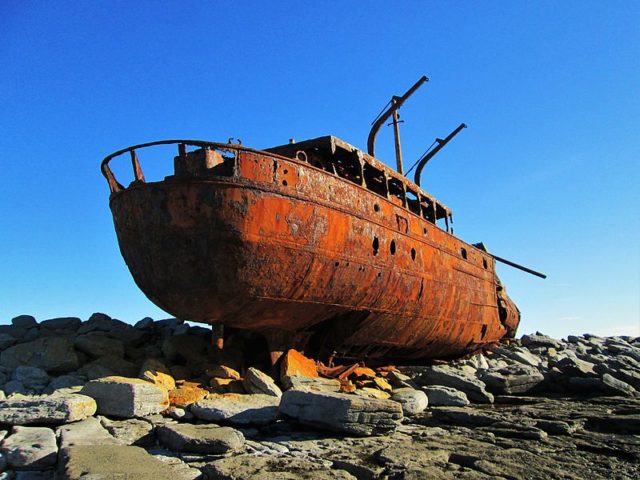 Wading from the rocky shoreline into the churning sea, some of the fourteen rescuers up to their necks in water, the Rocket Crew had only three chances to send a line across to the stricken ship. The first two rockets were snatched by the wind, but the third stuck, and the breeches buoy could be set in use. 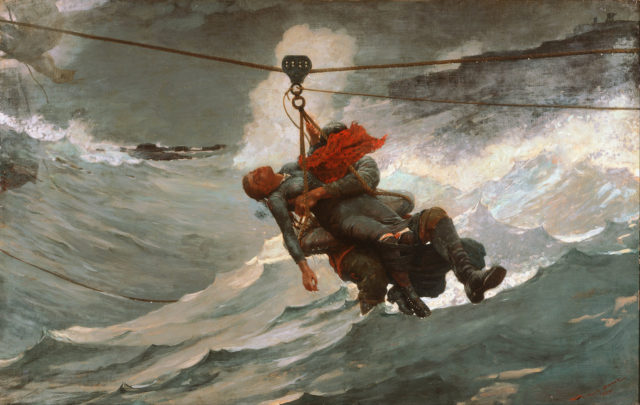 A breeches buoy in use. Author: Winslow Homer Public Domain

This rather crude method of rescue involved the men being hauled ashore one by one. After what seemed like a lifetime, all eleven men were transferred to the safety of land. A second storm a few weeks later had more in store for MV Plassy. She was lifted up by a tremendous wave and dumped above the high water line. This is where she remains today, possibly the most photographed wreck on the Irish coast, to talk about the day when the Rocket Crew came to the rescue.

« The ruins of Fore Abbey: The monastery that started to look more like a fortress than a religious complex
Abandoned last century power giant: Market Street Power Plant, New Orleans »