Cambusnethan Priory is located in the village of Overton, North Lanarkshire, Scotland. It is considered the finest surviving example of a quasi-ecclesiastical Neo-Gothic style building in Scotland.

Currently, all that remains of the Priory are the ruins of a two-story rectangular house with a deep basement. The Scottish Civic Trust has registered the building as being At Risk.

Although commonly known as Cambusnethan Priory, this building was never intended for monks or nuns but was actually a residential home for the Lockhart family. The architect was James Gillespie Graham, and construction was completed in 1820.

Before Cambusnethan Priory appeared, this spot had been the site of first a Norman tower house and then a manor house until the latter burned down in March 1816. The mansion itself was built of yellow ashlar sandstone. It was decorated with turrets, chimneys, cornices, and castellated roof lines.

The Tudor convent-style house had beautiful octagonal corner towers and a central entrance with gates. There were pointed arched windows on the first floor and rectangular ones on the second. The coat of arms of the Lockhart family of Castlehill (which incorporates a casket, heart, and lock) was carved above the main entrance and on every balustrade of the main staircase.

When the family lived here, they maintained wonderful gardens which, sadly, no longer exist today. Beyond that, little information is available about the period during which the mansion was a family home.

In the early 1960s, Cambusnethan Priory was rented out as office space for architects who worked on many projects for Livingston, Scotland. In 1967, the mansion was scheduled for demolition, but luckily it was saved when Ronald Wilson bought it. Wilson requested and received permission to convert Cambusnethan Priory into a restaurant and hotel.

In the 1970s, the house became famous for its banquet hall where mock medieval-style banquets were held. The banquet hall was stripped back to bare stone walls to give it a more authentic feel.

In February 1980, the owner put his restaurant up for sale for £300,000, having recently renovated it so that Cambusnethan Priory could also act as a hotel. Around that time, it was necessary to remove some of the ornate pinnacles for safety reasons.

After the property failed to sell, the interior was stripped of all lead and piping. In 1984, Motherwell County Council issued a Repair Notice which led to the house being boarded up. Sale to the Red Dragon Hotel Group fell through, and so the plans to turn Cambusnethan Priory and its grounds into a chalet complex fell by the wayside.

Its boarded-up and abandoned nature meant that Cambusnethan Priory suffered from vandalism. Following a fire in 1985, it was noted that the property was at substantial risk of falling down if repairs and structural works were not undertaken.

In 1986, the property was in the ownership of William Welch. His project to transform the building into 12 residential apartments was approved. He also intended to create another 24 apartments in the surrounding grounds, with the whole scheme costing around £1 million.

However, very little work was undertaken, and an inspection carried out in 1990 revealed that serious cracks had appeared in the walls of the building and the roof had collapsed. With so much work needed, the owner started looking for a joint developer to complete his apartment project. That summer, the District Council demanded the demolition of part of the southwest tower.

By 1992, the building permit had expired, and the owner submitted a new project valued at £2 million. Unfortunately, the Dalzell Heritage Trust objected to the specific plans, although it did indicate that it supported general plans to improve and restore the property.

In the years that followed, various plans and projects were put before the authorities, but none were approved. Then, in 1995, the building was again damaged by fire, after which the outer wall collapsed and the rest of the structure was severely weakened.

In the following decades, any renovation projects put forward were objected to by one organization or another, so that rather than being restored, Cambusnethan Priory fell into greater ruin. Most of the window frames rotted away, and the roof was completely gone by 1998. A lot of the building became covered in vegetation, and some walls collapsed or bore graffiti marks.

In March 2014, the group Friends of Cambusnethan Priory was founded by locals in an effort to raise funds and prevent the building from suffering any further deterioration. It recently ran a photo competition for pictures to include in its 2021 calendar.

These beautiful photographs were taken by Ben Allison. A big thank you to him for sharing them with us. Ben loves traveling and catching its moments with his camera. Visit his Flickr account to find out more. 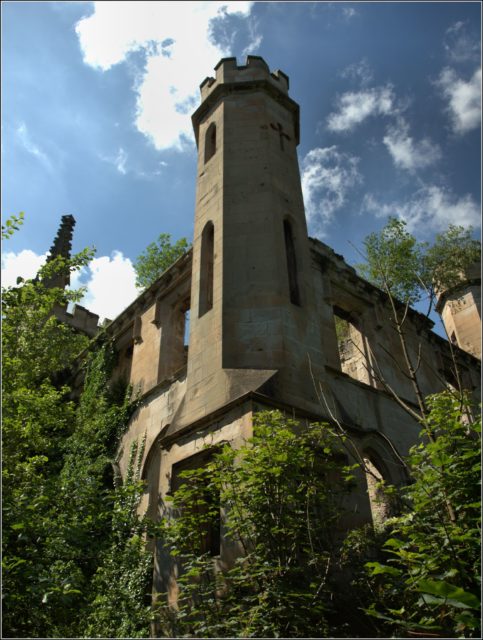 « The Tiki Palace in Tennessee
The Ruins of Château de Lacoste, One-Time Home to the Marquis de Sade »