Dartmoor National Park in the south of England has its fair share of remnants of old buildings and mysterious stone circles. Perhaps one of the most interesting abandoned structures can be found along the Templer Way footpath, which follows the route of a very unique tramway. Unique because these tramlines are made out of granite.

As the industrial revolution in Britain accelerated into the 19th century, so too did the demand for materials to create increasingly ambitious buildings. Plans for the construction of a new London Bridge to be made from granite were made in the early 1800s, designed by John Rennie. But the question was, how to get the hard-wearing and handsome looking stone from its quarry to the building site?

George Templer, owner of the Stover Estate in the county of Devon, won the contract to supply the granite. Templer had been quarrying excellent quality granite from Haytor Down for a few years, firstly to build the Stover Manor house and a local church, transporting the stone blocks by horse and cart. But now he had to transport vast amounts of heavy stone across miles of rough terrain to reach the port of Teignmouth. 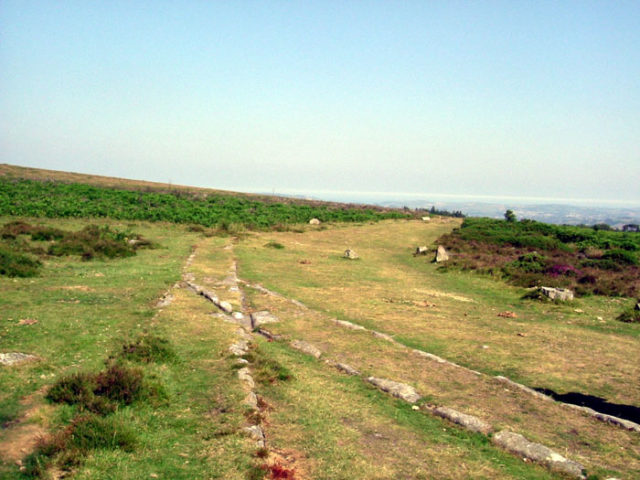 A part of the track. Author: Steinsky CC BY-SA 2.5

The ingenious solution was to build a tramway from Haytor and Holwell quarries high on the moor, down to Stover Canal at Ventiford. However, the iron which was usually used to make rails was not easily available in the local area, so Templer made good use of what he had plenty of. Granite.

The tramway was a success; countless tons of stone were taken along the eight and a half miles of track, then transported by boat to be used in big cities for building bridges and countless other structures, including London Bridge. Work on this new London Bridge began in 1824 and the bridge was opened in 1831. It was dismantled in 1964 and shipped to Lake Havasu City, Arizona, where the Dartmoor granite structure was reassembled and still stands today. 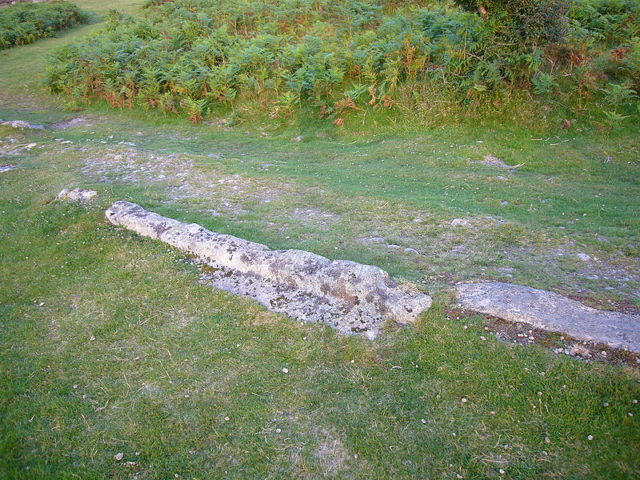 Transportation of the massive loads was no less challenging than the process of quarrying this stone. The Haytor Granite Tramway relied on real live horsepower to pull it’s wagons. The wagons were usually grouped in twelve and took around 18 horses to pull them. The horses were rearranged according to need: on the downward slope, a descent of around 1300 feet, they went behind the wagons to slow them down. Once the wagon was unloaded onto the waiting boat, it was returned directly to the quarry, with the horses pulling from the front. 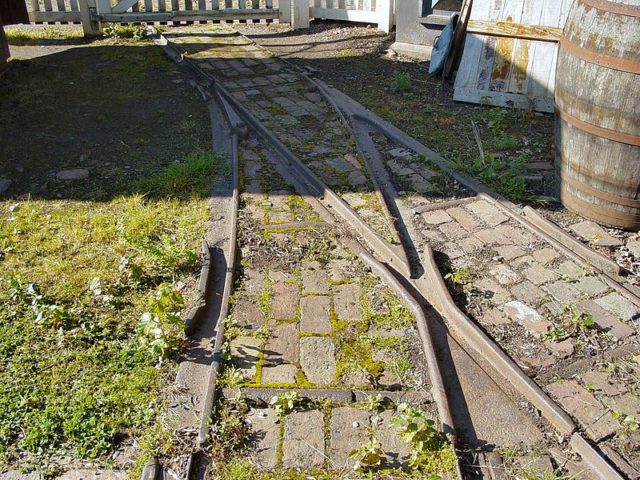 The design of this tramway closely resembles a plateway, which was an early tramway system whose rails were shaped like the letter L with the upright support acting as a guide for the wheels. 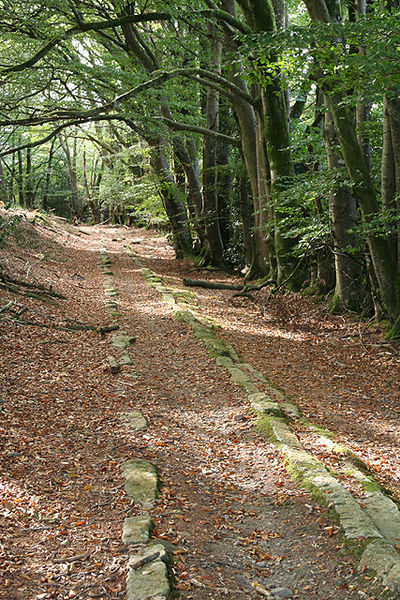 What is left of the tracks today. Author: Martin Bodman CC BY-SA 2.0

The Haytor Granite Tramway itself kept this design. The only difference was that these rail tracks were made of granite instead of cast iron and shaped in a way to allow for better maneuvering of the horse wagons. The spacing of the rails was 4 ft 3 in. 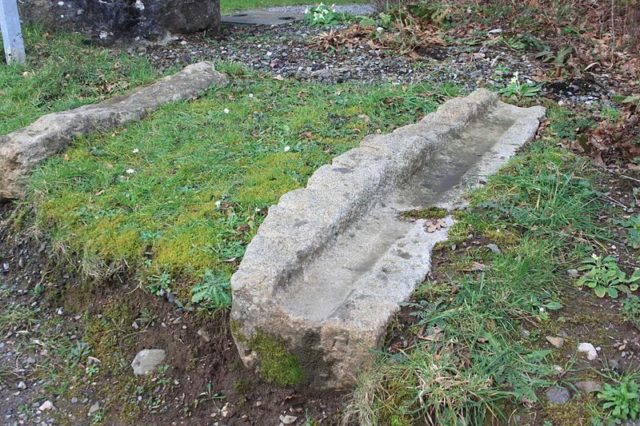 The fact that the wheels of the wagons were made with no flanges made turning the wagons around at each end of the tramway a lot easier. The wooden flatbed wagons were around 13 feet long and wheels that were roughly 2 feet in diameter. 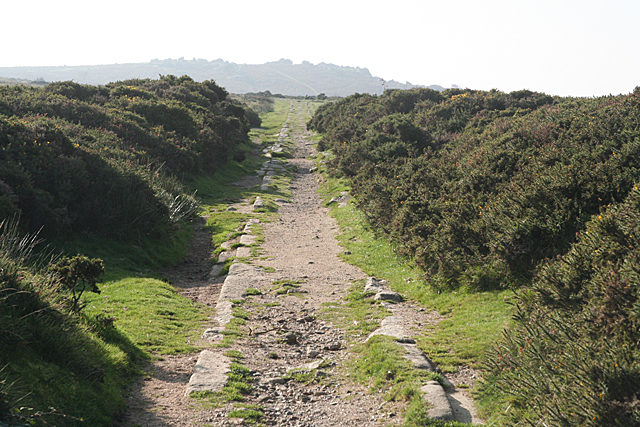 Stover Canal had been constructed in 1790-2 by James II Templer for the purpose of transporting clay. The canal was extended in 1820 to reach Ventiford Brook near Teigngrace, where met the granite tramway. Once the granite was brought to the canal, it was loaded onto canal boats which took the load to the New Quay at Teignmouth, from where it was loaded onto bigger ships for transport along the coast to reach London and other cities. 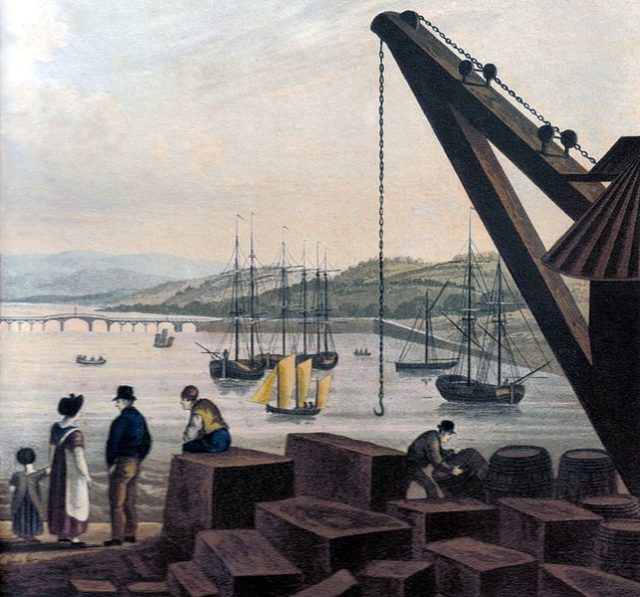 Around the 1830s, George Templer, the son of James Templer, ran into some financial troubles and saw no other way out of the crisis but to sell Haytor Granite Tramway complete with the Stover Canal. The new owner of this property was Edward St Maur, the 11th Duke of Somerset. 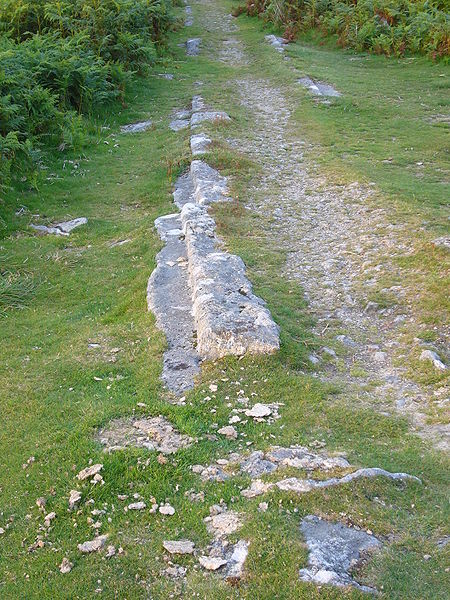 George Templer left the area but was back some years later with freshly made capital and spoiled himself with buying a mansion on the borders of Newton Abbot. 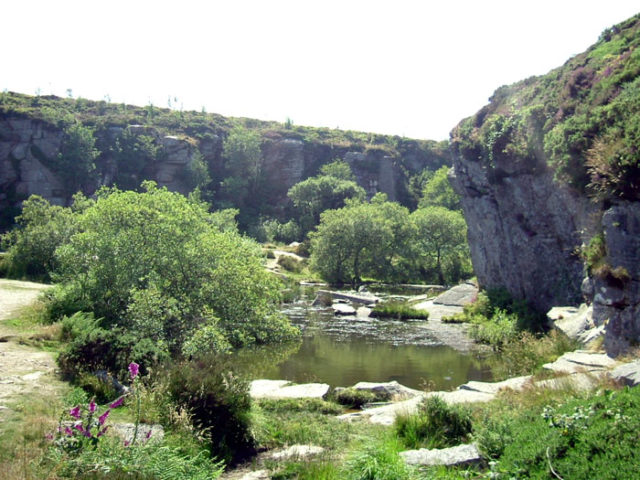 Plug and feather was the method they used to split the Dartmoor granite, an improvement from the older wedge and groove method. Even though called feathers, they were actually iron prongs that were inserted inside previously made holes and hit with hammer until the granite split. At its peak, the quarry employed around 100 men. 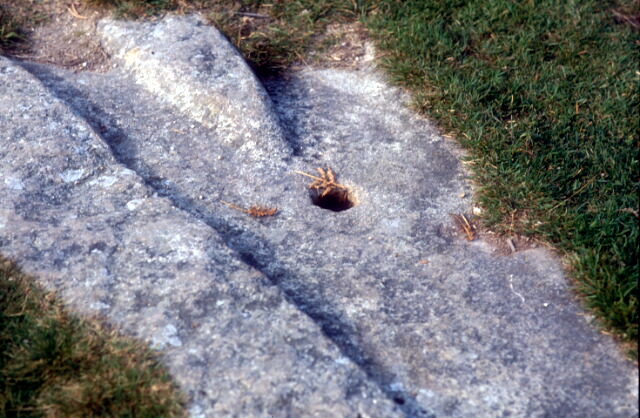 The granite from this famous quarry was used for the construction of a number of important buildings including the British Museum and Ludgate Circus. The Exeter War Memorial was the last piece of granite to leave this quarry. The reason why Haytor Quarry was closed was because less expensive and easier to obtain granite from Cornwall became widely available.

It was 1858 when the Haytor Granite Tramway and the quarry were abandoned. Only fragments remain to be seen today.

« Siegfried Line: An abandoned defence wall that saw both peace and war
Archaeology of the future in the abandoned Sicilian town Gibellina: “The Great Crack” »