High on top of Handia hill, the beautiful Château d’Ilbarritz oversees the Atlantic Ocean. It offers exceptional panoramic views of the Basque Coast, and you can see both France and Spain from its high vantage point.

The castle was built between 1894 and 1898 by the French architect Gustave Huguenin. It was commissioned by Baron Albert de l’Espée, who was obsessed with pipe organs. Its construction cost 5 million francs.

The castle was built in a stunning location in Bidart, near Biarritz, France. This part of France is in the French Basque Country and quite literally minutes away from Spain. The Baron chose this location because he believed it to be the most beautiful of all the places he had seen around the globe. 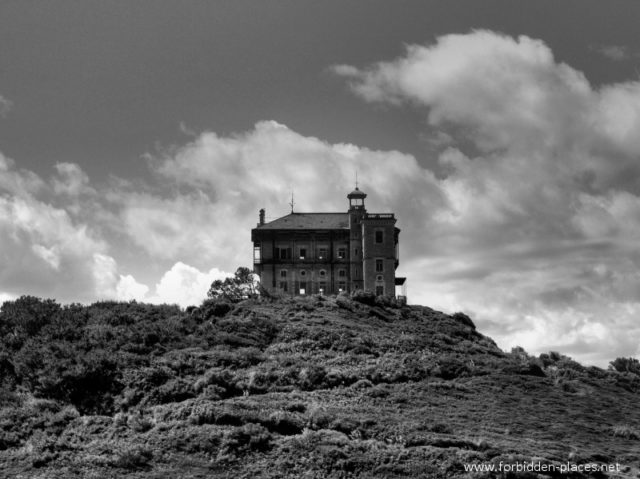 A black-and-white photo of the castle from outside ©Sylvain Margaine forbidden-places.net

The Baron had an eccentric and misanthropic lifestyle. Just like his other homes across France, this castle was a way for him to fence himself off from society.

The estate did not consist of just the castle. On the 150 acres of land, 14 additional buildings were built, including a Chinese pavilion, kennels, a stable, kitchens, and more. In fact, one of the buildings is now the Blue Cargo nightclub.

The castle itself has a total area of 32,000 square feet. It was very modern for its day, benefiting from the newest technological wonders: electricity and the telephone. It also had a water filtering system and air conditioning. The main staircase was made out of wood to ensure good acoustics. 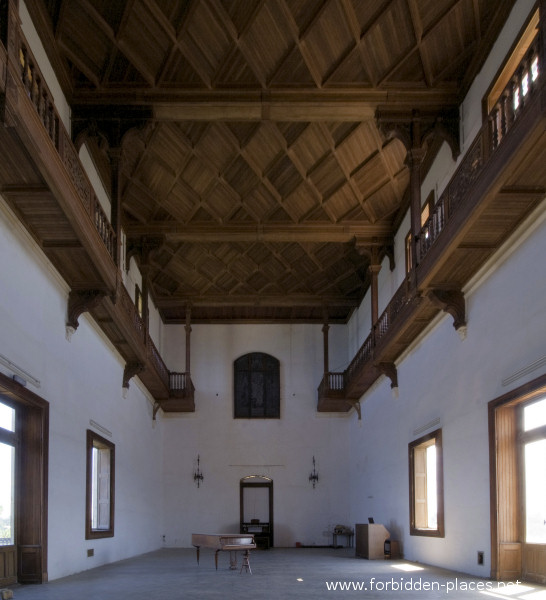 A special room inside the house with a ceiling over 2 stories high was created especially for de l’Espée’s organ. It was a very special organ, not only because it was the largest privately-owned pipe organ, but also because it was built by Aristide Cavaillé-Coll, a renowned French organ maker who revolutionized organ building. Cavaillé-Coll organs are considered some of the finest 19th century pipe organs.

The organ was dismantled in 1903. It is now at the famous basilica of Sacré-Cœur, Paris.

In 1911, allegedly on a whim, the Baron sold the property. During the First World War, the castle was used as a hospital.

It was sold and resold several times throughout its history. When it was sold in 1923, its land was fragmented, so the estate decreased in size. Some of the auxiliary buildings were demolished while others were reconverted. Casino La Roseraie was constructed along the northern side of the castle, but during its inauguration, a wall collapsed. Allegedly, the notorious embezzler Alexandre Stavisky was involved. After the incident, the site was left abandoned for a while. 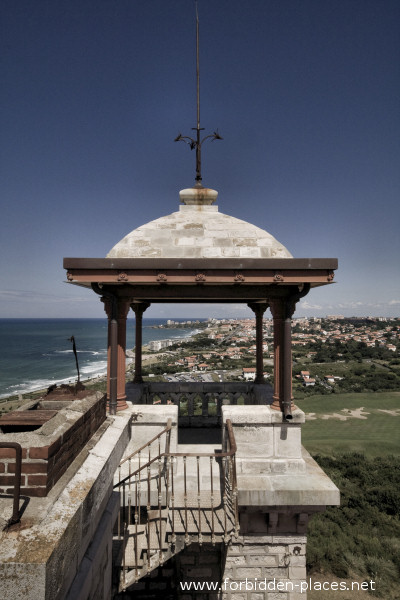 During the Spanish Civil War, Château d’Ilbarritz was converted into a recovery center for refugees. A little later, from 1940, it housed a German garrison. It fell into disrepair again after the Second World War, until it was sold in 1959.

In 1963, it was converted into a hotel. The château became a fashionable holiday destination; Georges Pompidou was among its guests.

It was sold again in 1986. Four years later, parts of it were declared historic monuments: the facade, the roof, the main staircase, and the organ hall. This blocked the owner’s plans to convert the building into a sanatorium and spa center. So, Château d’Ilbarritz was abandoned and suffered from the lack of maintenance.

It was listed for sale in 2011 for 12 million euros. Within three years, it was sold for a lower price, and there are now plans to open it to the public once again. The new proposal to convert the castle into a hotel with a spa is a costly project, so whether it will be implemented is uncertain. 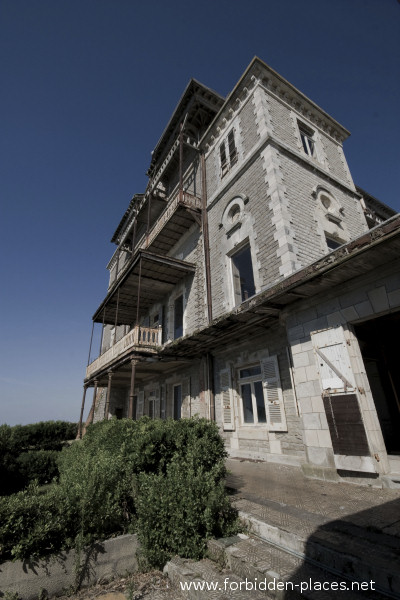 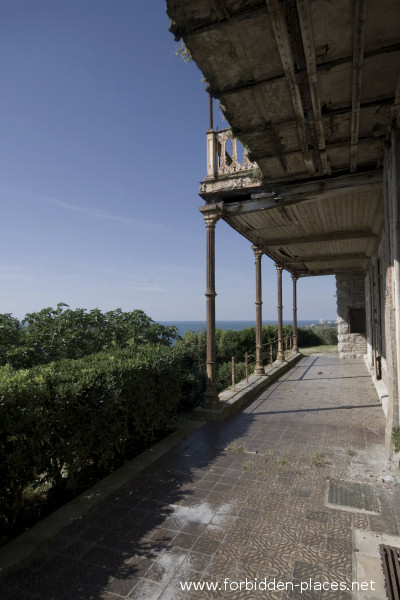 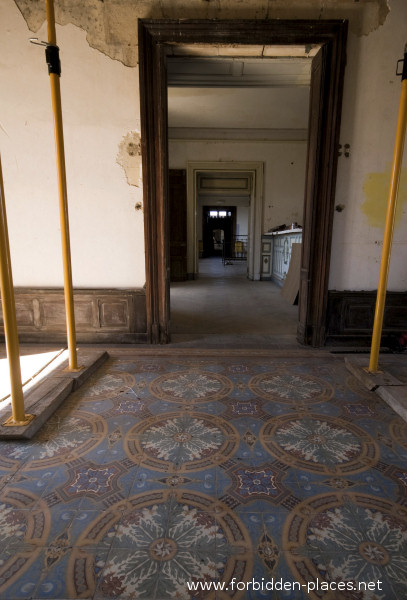 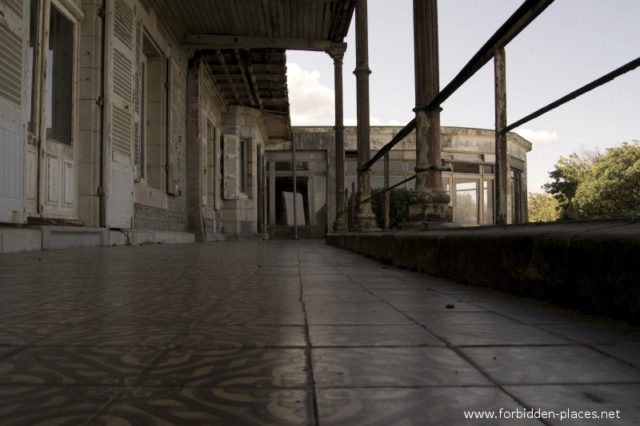 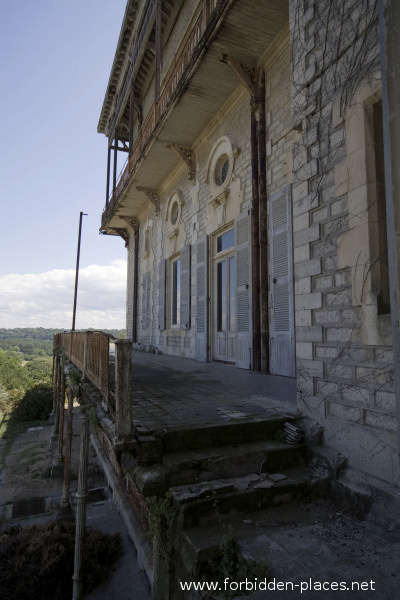 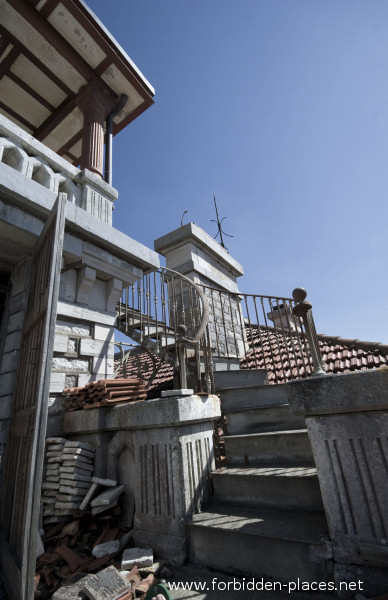 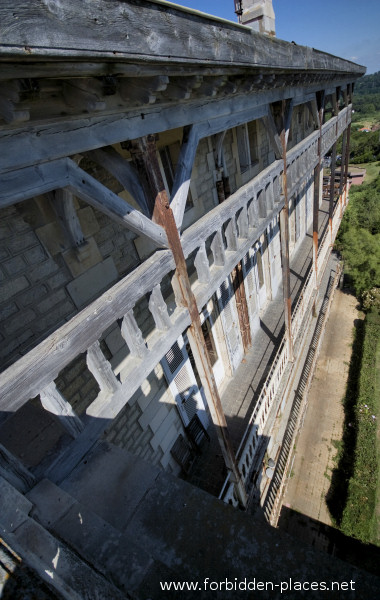 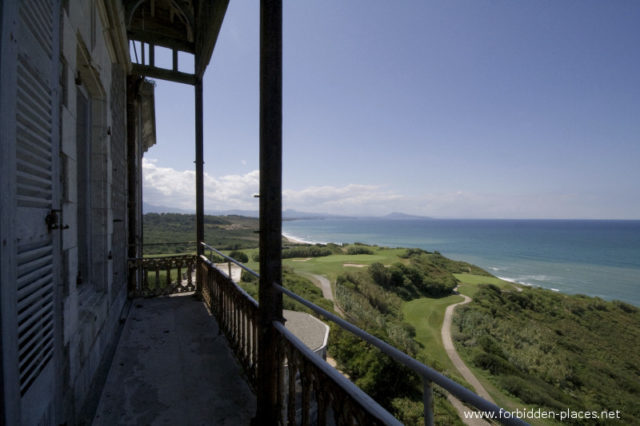 The Pyrenees Mountains can be seen in the background ©Sylvain Margaine forbidden-places.net 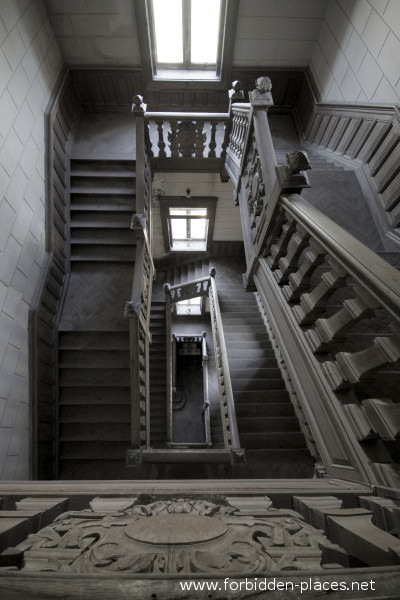 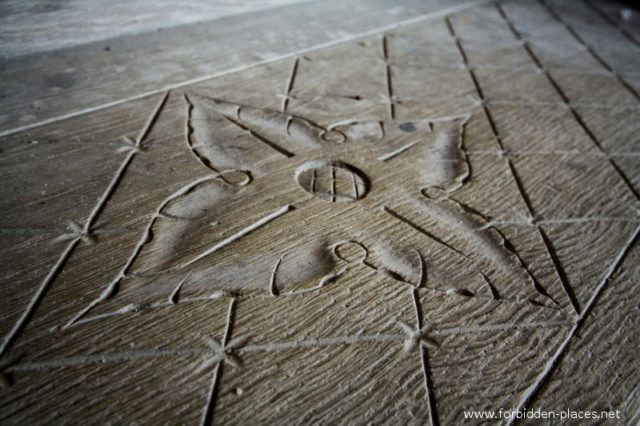 Detail of a step on the main staircase ©Sylvain Margaine forbidden-places.net 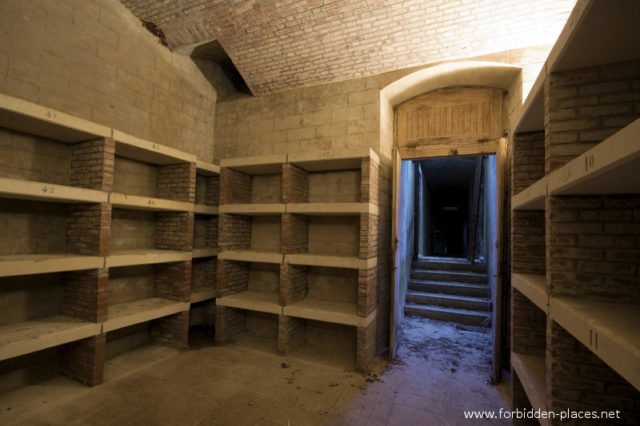 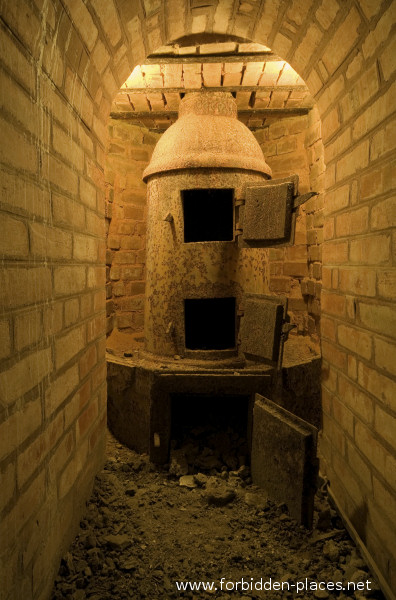 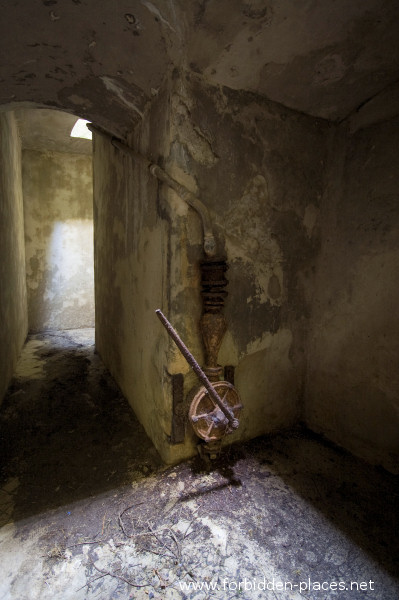 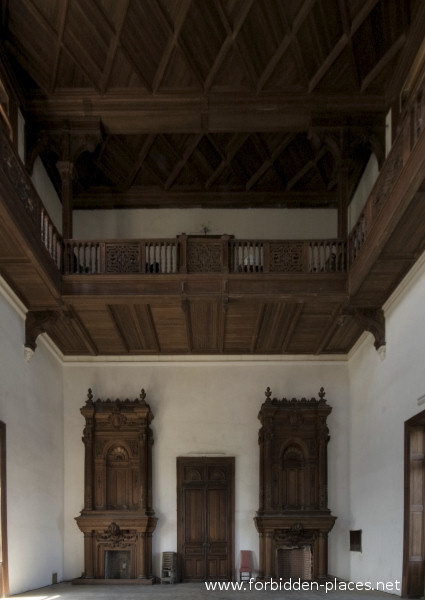 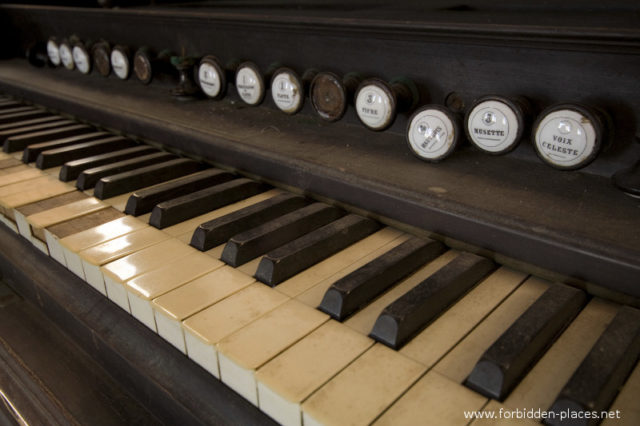 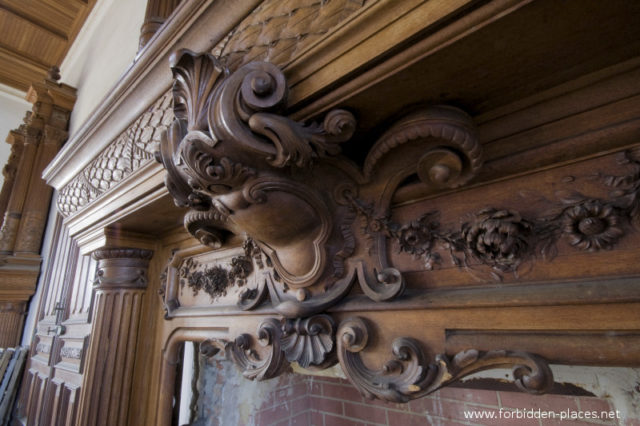 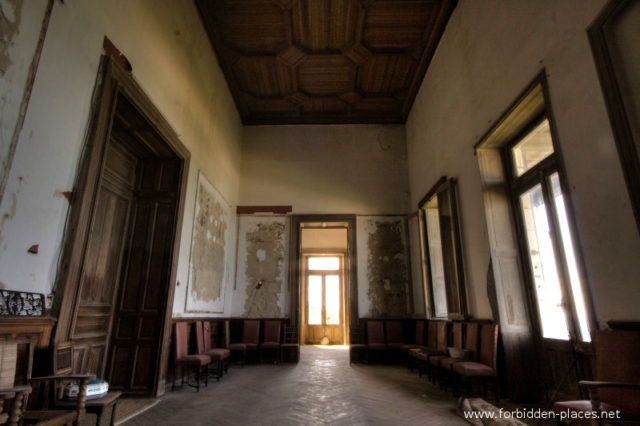