From a magnificent palace, to a rich museum, to a burned-out shell filled with ash, rubble and lost legacy. This is, in short, the path of the National Museum of Brazil in Rio de Janeiro, which was devastated by a fire that broke out on September 2, 2018. The museum posted the following notice on their website:

“NOTE TO THE PUBLIC. Our exhibits are closed due to the fire that destroyed most of our collections.”

Two hundred years earlier, Dom João VI “The Clement,” King of the United Kingdom of Portugal, Brazil and the Algarves, established a museum that with time would grow to become one of the largest museums of natural history and anthropology in the Americas. There were more than 20 million artifacts housed inside the Museu Nacional. 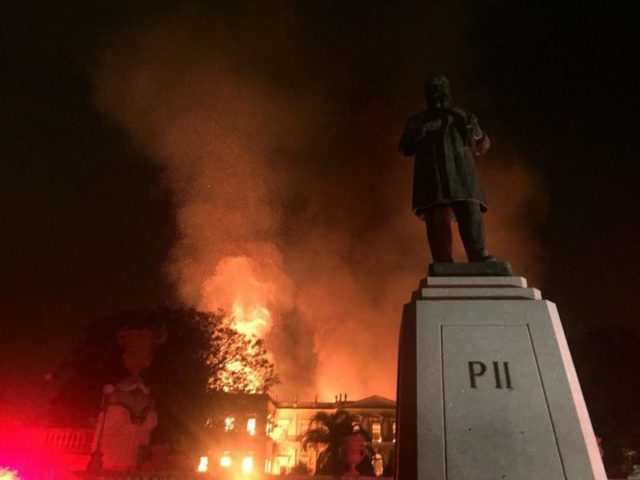 The museum during the fire. Author: Felipe Milanez – CC BY-SA 4.0

Huffington Post reports that the museum “was known for its vast collections spanning archaeology, paleontology, anthropology, and the study of invertebrates (the latter containing about five million insects), as well as laboratories and classrooms.” 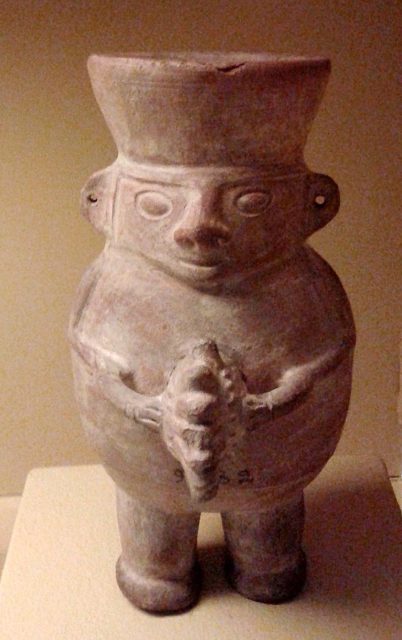 Even the building itself is of importance, as it served as a royal palace from 1808 to 1821. This is where the Portuguese royal family lived after they fled Napoleon’s invasion of Portugal.

It was during his residency here, in 1818, that King Dom João VI started his Royal Museum. At first, the museum collection was comprised of bird specimens and plant species — earning it the nickname “House of the Birds.”

As the Liberal Revolution spread through Portugal, the king returned home in 1821 to attempt to quell the civil unrest of his people. While ruling in his stead as regent of Brazil, his son Dom Pedro “The Liberator” declared Brazil’s independence. 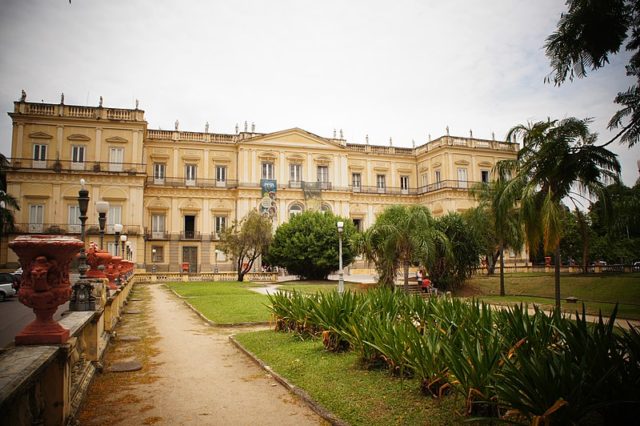 Pedro was hailed as the first ruler of the Empire of Brazil. The palace complex continued to house the country’s emperors until 1889.

The Royal Museum gained more fame once Pedro I married Archduchess Maria Leopoldina of Austria. This union brought the museum to the attention of European scientists, and a new era for the institution was born. 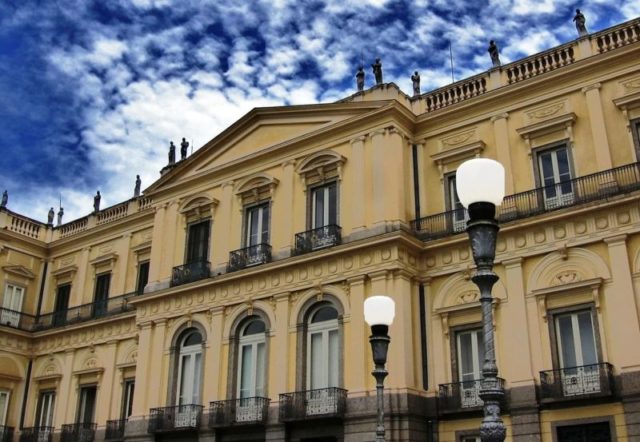 New areas, such as anthropology and palaeontology, were added towards the eve of the 19th century. The museum received enormous support from Pedro II, Brazil’s second — and last — monarch. It was his contribution to the museum’s collections that modernized and propelled the institution forward.

From that point on, Brazil’s National Museum would keep growing and scientists from all over the world were eager to work here. 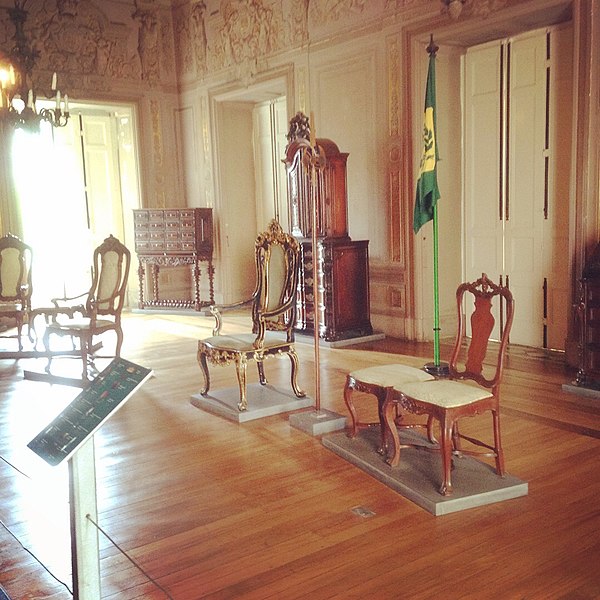 After WWI, the University of Brazil took control of the museum.

Like so many public collections around the world, the National Museum has been dogged both by political and funding issues. “More than a decade ago, inspectors had pointed to the museum’s ropy electrical wiring. Its director had complained of termites and closed a third of the exhibition rooms,” writes The Economist.

Budget cuts since 2014 have exacerbated the problems. According to the BBC, “Many see this as a metaphor for the city – and the country as a whole.” 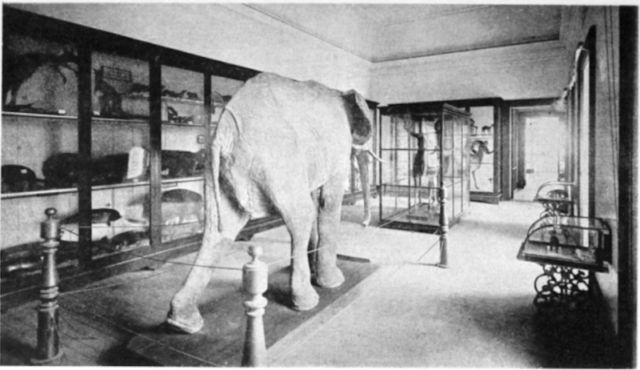 Part of the issue stems from the university’s seeming reluctance to relinquish even a fraction of its governance of the museum. No less than $80 million was offered around 20 years ago to modernize the museum. A stipulation by the generous donor — the World Bank — was for the museum to be run as a private nonprofit organization, with control placed in the hands of an independent board. The University of Brazil refused the offer.

The number of visitors has dropped sharply over the years too. For instance, in 2017, the Louvre was visited by eight million people. That same year, the National Museum of Brazil had barely 160,000 visitors. 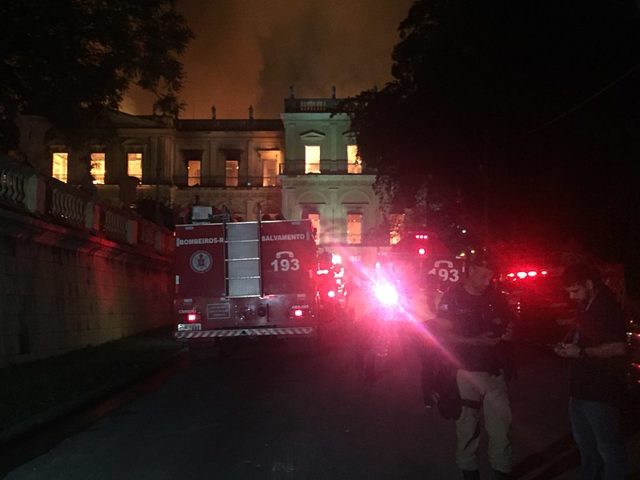 The two fire hydrants close to the museum were empty – firefighters had to draw water from the nearby lake. Author: Felipe Milanez – CC BY-SA 4.0

“Poor people in Brazil do not go to school, let alone to museums. Rich people go to museums – but in London, New York or Paris, not in Rio or São Paulo,” writes The Guardian.

The beginning of the end for this institution started around 7:30 pm. Some of the museum employees noticed the fire and began salvaging everything that they could carry. Students also helped save part of the museum’s collection. 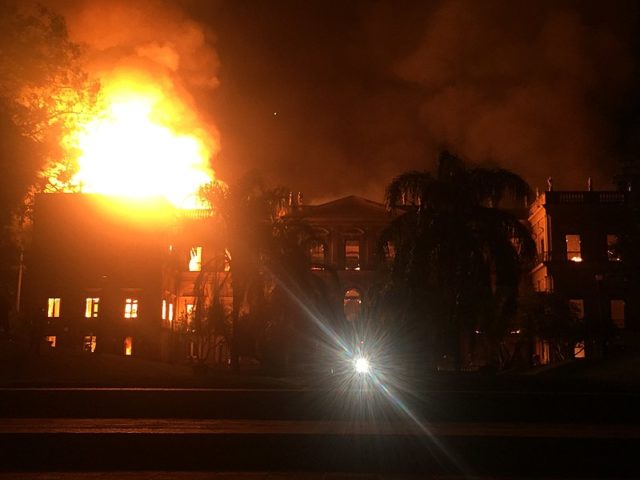 But the fire spread rapidly and with each inch, a legacy was lost. Innumerable artifacts are lost, among which are the oldest human fossil, “Luiza,” and a rare dinosaur fossil. 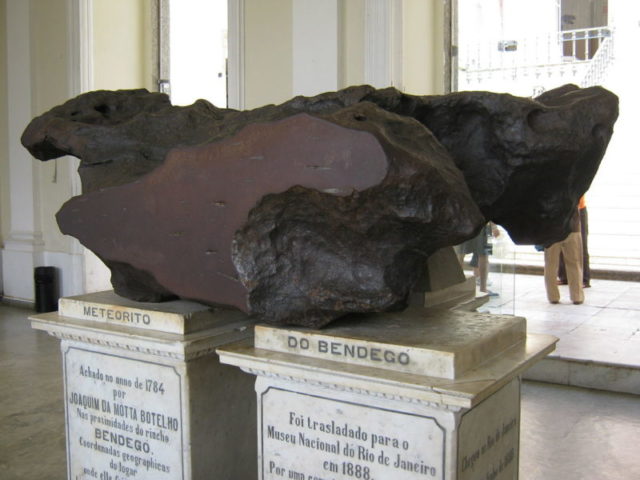 The largest meteorite ever found in Brazil, the Bendegó meteorite, unsurprisingly survived the fire unscathed. Author: Jorge Andrade – CC BY 2.0

Hundreds of Egyptian artifacts and a Chilean mummy are also on the list of items feared lost in the blaze. Among the artifacts that are known to have survived the fire is a 5.8-ton meteorite, and the library where 500,000 books kept. After the fire was put under control, and it took days to do so, a number of museum staff entered the building to assess the damage, and begin an inventory of the survivors. 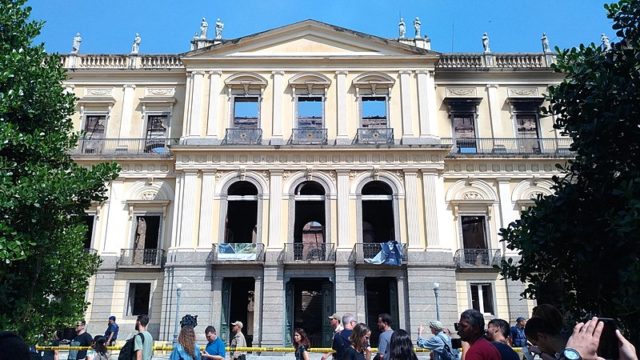 Crowds gather after the fire to mourn the loss of a national treasure. Author: Lu Brito – CC BY-SA 4.0

Now the museum is blackened roofless shell. Investigators are trying to understand the true cause of the fire and the scientific community is trying to come to terms with the loss of such unique collections. Parts of the building are still off limits.