Lamphey Bishop’s Palace: was once a luxurious retreat for medieval bishops

The Bishop’s Palace at Lamphey in Pembrokeshire, Wales, was a holiday retreat for Welsh Bishops of St. Davids. The remains of the impressive medieval palace clearly show the luxury offered to all that came to escape the everyday duties and worries of the Church and State.

Some historians even compare the hedonism of the bishops with the hedonism of queens and kings. This is not surprising as, in the middle ages, bishops were viewed as the Princes of the Church and were respected almost as members of the Royal family. 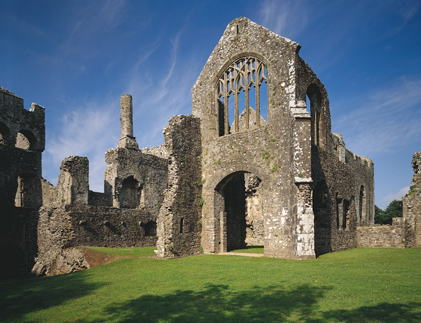 They had beautiful palaces situated at different locations throughout their dioceses. Three palaces were located in the Pembrokeshire area of the Diocese of St. Davids.

Lamphey Palace was a favorite country residence for the bishops and the other two, now also in ruins, were the palaces at Abergwili, Carmarthenshire; and Llawhaden, near Narberth. The distance from Lamphey Palace to the other two was approximately a one-day ride on primitive roads. 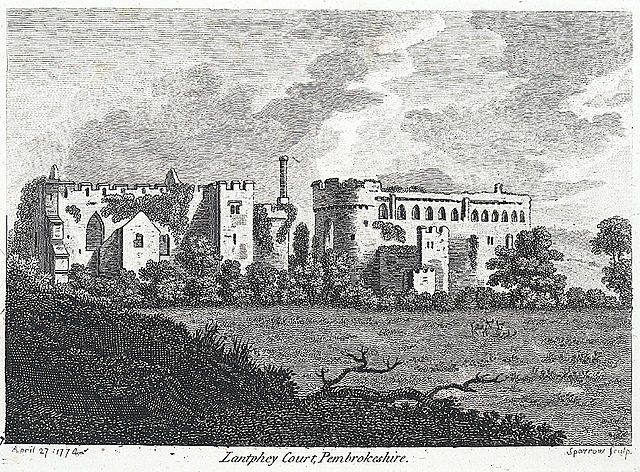 Lamphey Palace was very extravagant. It had an enormous wine cellar, multiple banquet halls, a chapel, and guest rooms with beautiful views over the tranquil parkland where deer and cattle grazed.

There were also fishponds, orchards, and herb gardens, which provided fresh and high-quality food. Many gardeners, servants, guards, and cooks were employed. A document from 1536 shows that the palace had 27 rooms. 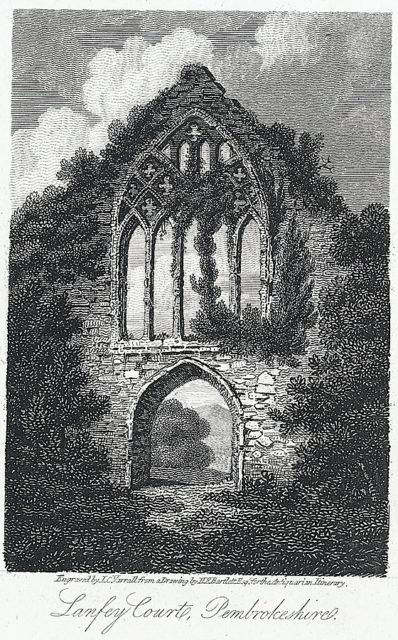 Wall with archway and window frame, engraving from 1815 by H. F. Bartlett and J. C. Varrall

Regardless of the extensive facilities, the location was pleasing by itself. Although in ruins, the palace remains highly atmospheric and the ruined walls, some of which still stand at their full height, have plenty of stories to tell. The ruins are well-preserved and any wandering soul can easily get a clear picture of the past life of the site. 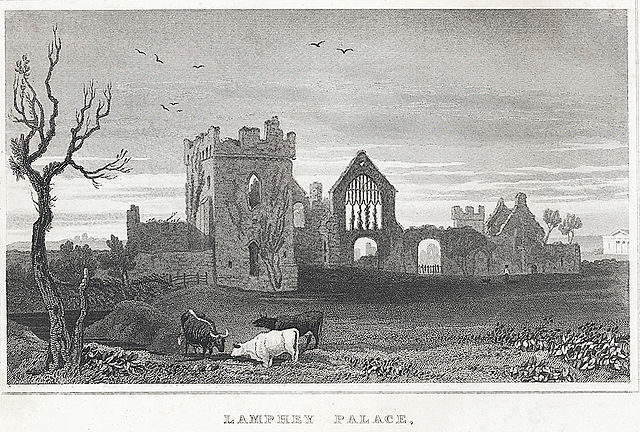 Engraving from circa 1830 by Henry G. Gastineau and H. W. Bond

The palace was constructed before the Norman invasion and was largely extended and reconstructed between the 13th and 16th centuries.

Between the beginning of the 13th century and the middle of the 14th century, three ranges were erected, each larger and more magnificent than the previous. The complex had two courtyards on its southeastern side. At the center are the remains of the 13th century Old Hall: the earliest surviving section. 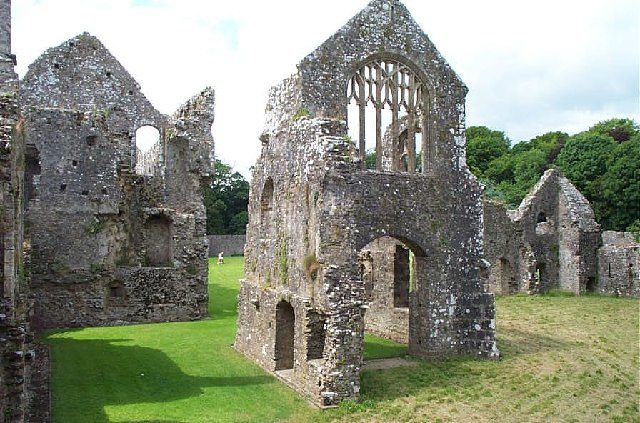 It was a favorite residence of the bishops of St. Davids/ Author: Garth Newton – CC BY-SA 2.0

Attached to the Old Hall is the larger Western Hall, which was most likely built on the orders of Bishop Richard Carew, bishop of St. Davids from 1256 till 1280. The eastern part has ornamental parapets with arcades and was – along with many other parts of the palace – built on the suggestion of Bishop Henry de Gower, the bishop from 1328 until 1347.

Henry de Gower also initiated other builds, including the Bishop’s Palace at St. Davids and the ruined Castle in Swansea city center. Lamphey became an elegant retreat for high-ranking members of the clergy that harbored desires to live like country gentlemen. 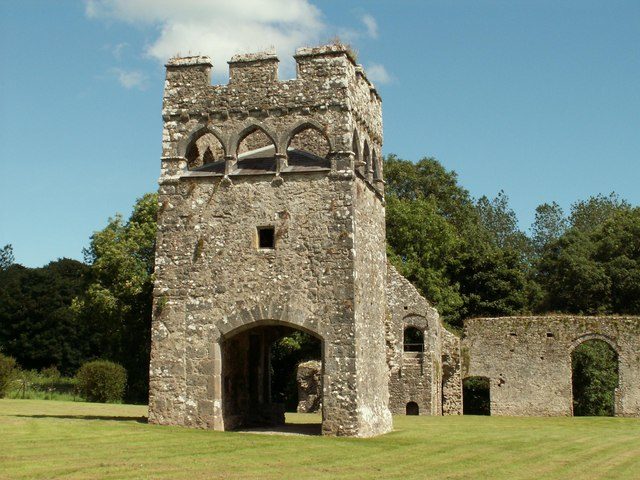 Part of Lamphey Bishop’s Palace (the 13th-century Inner Gatehouse) that originally had walls attached on each side, thus dividing the inner from the outer courtyard/ Author: Robert Edwards – CC BY-SA 2.0

The flourishing days of the palace ended rapidly during the Dissolution of the Monasteries, ordered by King Henry VIII. The bishops lost most of their privileges and many church properties became royal properties.

In 1546, the palace was surrendered to the Crown and soon given to Richard Devereux, a local nobleman who used it as his private residence. His successors, the Earls of Essex, were the owners for more than 100 years. During the Civil War, the site served as a garrison for Cromwell’s supporters and supplied the town of Pembroke and its castle with food. In 1683, it was bought by the Owens of Orielton, who used the structures as farm buildings.

In 1821, the wealthy Charles Mathias of Mathry became the new owner, although by now the palace was in poor condition. He restored many of the buildings but had no intention of living there. Instead, he bought the nearby Lamphey Court and demolished the old structure to build a new mansion, which now is a hotel. He developed Lamphey Bishop’s Palace into a walled garden and the site entered into a phase of an elegant decay. 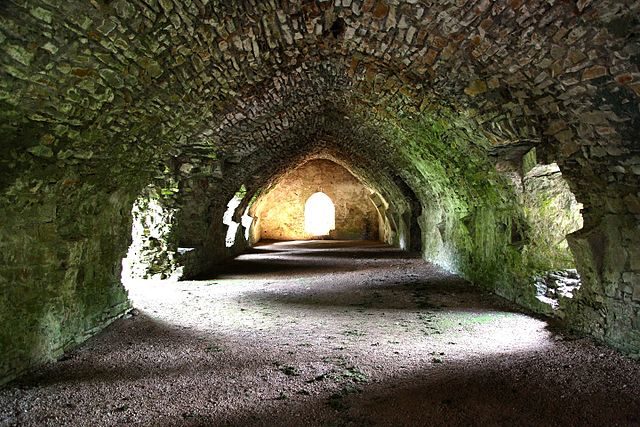 Since 1925, the site is protected by Welsh authorities and is now maintained and managed by CADW (Historic Environment division of the Welsh Government). Recently, extensive renovations were carried out and now visitors can enjoy the splendid buildings.

At 82 feet long, the Bishop Gower’s great hall is a remarkably fine piece of architecture. The design’s grandeur and attention to detail is a spectacle to behold. The inner gatehouse and the western hall are also well-preserved and still detailed in their appearance.

« The Midland Grand Hotel: used as a filming location for parts of Harry Potter, 102 Dalmatians and Richard III
Euston Arch: once disliked, it is missed by many since its demolition »