Euston Arch: once disliked, it is missed by many since its demolition

Euston railway station stands in the London Borough of Camden. It was opened on July 20, 1837, and was razed to the ground in the 1960s.

Euston Arch was the original entrance to the station. Constructed the same year as the train station, the arch faced Drummond Street, London.

The designer of the arch was the English architect Philip Hardwick, who had previously designed many train stations including Birmingham Curzon Street Station – the world’s oldest terminus building that is still operational.

Hardwick was inspired by Roman architecture during his travels through Italy between 1818-1819. Euston Arch resembled a propylaea, or Greek gateway of the Doric order.

It was constructed using sandstone and was viewed by all the passengers using the London and Birmingham Railway. It was very unique and distinct at the time. There were four columns, further enriched with bronze gates that stood behind them.

The arch towered 70 feet into the air and was around 44 feet deep. The columns were each eight-and-a-half feet in diameter. Bramley’s stone was used for the build as it is as hard as granite. $47,000 ($5,119,000 in today’s money) was spent on the construction.

It initially had almost no decoration; in 1870 a descriptive title was added to the epistle and “London and North Western Railway” was written in gold letters.

Lodges were added to all four sides of the arch. According to researchers, part of the arch was used as an entrance for heavy vehicles such as carriages and heavy goods that arrived by train, and other parts took care of the outgoing traffic.

But the arch was not popular with everyone, despite its lavish appearance. For instance, in a Guide to London that was released during the time of the 1851 Great Exhibition, the arch was described as “Gigantic and very absurd.” The Daily Telegraph writes, “At first, the arch was not universally liked. Augustus Welby Pugin thought it a grotesque example of architectural showing off, a ‘Brobdignaggian absurdity,’ a monstrous portico ‘for the cabs to drive through.’ ” 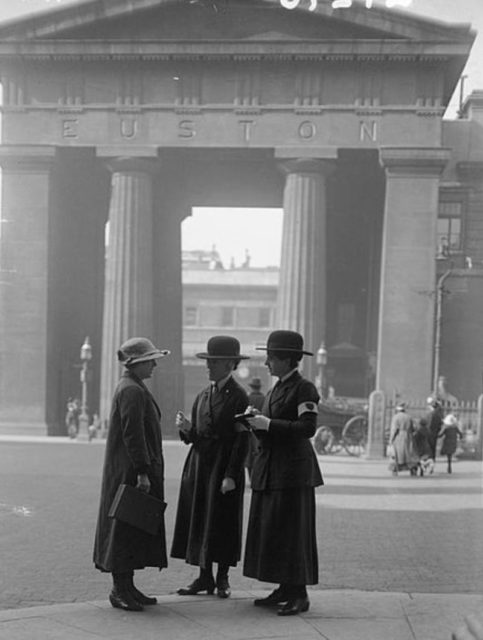 In 1938, a proposal was submitted for the removal of the arch. According to the Londonist, “It’s not even an arch. Our dictionary defines an arch as a ‘curved supporting structure.’ Is it curved? No. Is it supporting anything? Yes, but only its own preposterous bulk.”

The proposal came from the London Midland & Scottish Railway and their wish was to reconstruct the station using a more contemporary American design by Percy Thomas.

When he came back from the United States after touring the train stations for inspiration, Thomas proposed that the new station should incorporate a hotel and offices and this meant one thing: the removal of Euston Arch.

Everything was postponed when World War II started. The arch managed to survive until December 1961. That year, its demolition was scheduled to be carried out by the company Leonard Fairclough & Son.

It took a number of weeks to complete the demolition as everything was done by hand and no explosives were used. Today, only bits and pieces remain; the gates are now on display at the National Railway Museum in York.

According to the historian Dan Cruickshank, a great part of the demolished gate lies at the bottom of the Prescott Channel. Part of it was recovered in 1994. A proposal for the reconstruction of the arch was made in 2014.

« Lamphey Bishop’s Palace: was once a luxurious retreat for medieval bishops
England’s largest military hospital: a quarter-of-a-mile-long & on the banks of Southampton Water »