Three abandoned swimming pools from around the world

From ancient times till modern days swimming pools are known as places for fun, recreation and exercise. But for various reasons some swimming pools have been abandoned and left to decay. Once places of joy, today only reminders of a beautiful past, the following are some of the many swimming pools around the world left in ruins:

The Azure Swimming Pool is one of three indoor pools located in the abandoned city of Pripyat, Ukraine. The 50,000 inhabitants were evacuated due to radiation from the Chernobyl catastrophe in 1986, hover Pripyat was not left entirely abandoned for another 12 years.

The pool continued to be used by the civil and military staff that worked on dealing with the damage and consequences of the nuclear disaster. This city is probably the most famous abandoned place in the world. Pripyat became ghost town due to radiation from the Chernobyl catastrophe, which is situated near Pripyat. 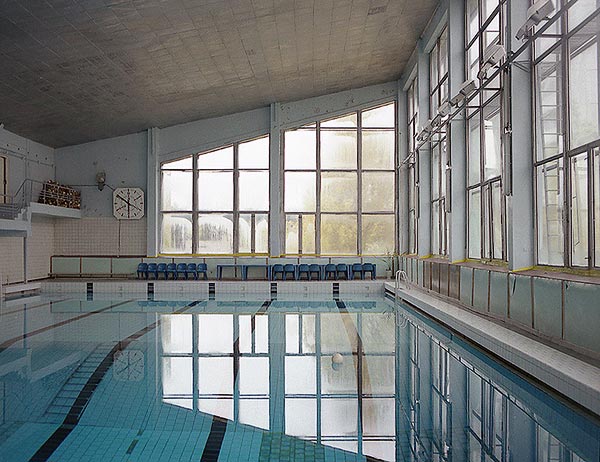 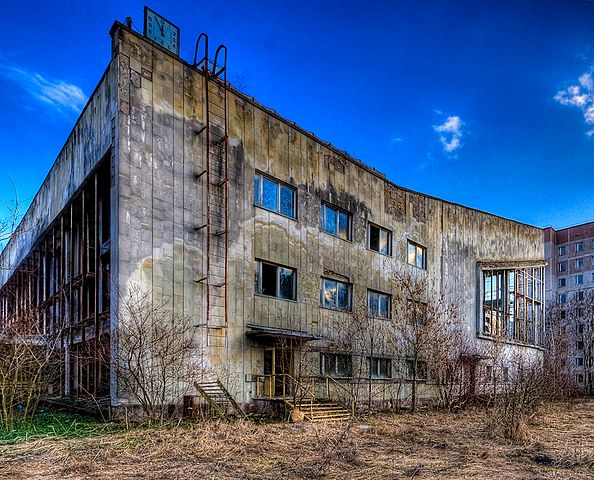 It was constructed and opened in 1970s and was used until 1998, when it was closed after a health inspection. Now, the swimming pool, gymnasium, and the adjoining indoor basketball court are completely deserted, apart from visiting tourists who are able to take strictly controlled guided day trips into the radioactive exclusion zone. 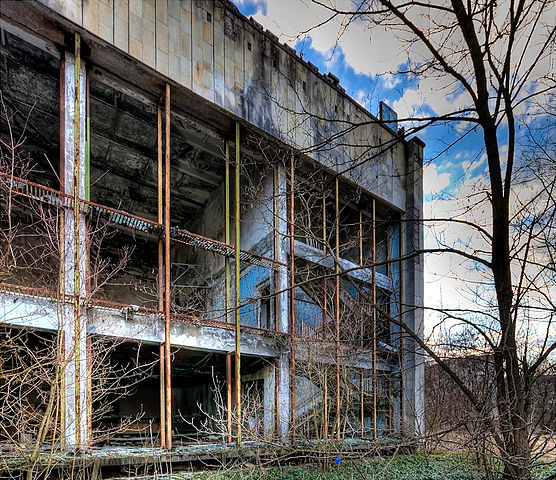 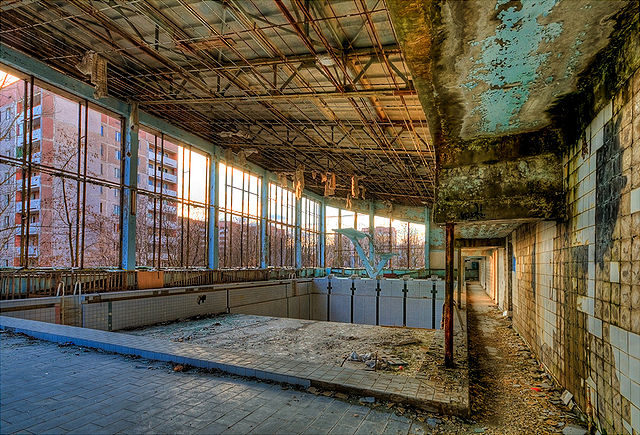 The fame of the Azure Swimming Pool has also been boosted since it featured the computer game Call of Duty 4.

This abandoned swimming pool was part of the famous Hampton Springs Hotel located near the town of Perry in Taylor County, Florida, United States of America. Local businessman decided to build a hotel in this area and to profit from the healthy spring waters that are found here. The popular resort, opened in 1908, was left to decay after it burned down in 1954. 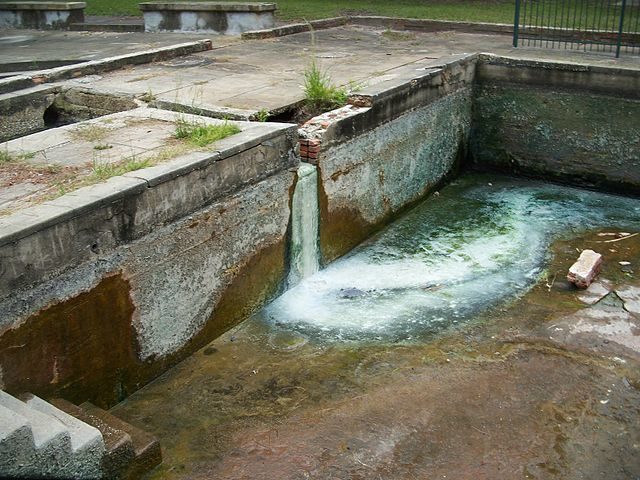 The the roof and the walls of the concrete indoor swimming pool were destroyed by the blaze, leaving it open to the elements. The Hampton Springs pool was constructed around the spring itself so that the sulfur waters sparkled into the swimming pool, and the overflow was directed into the river. The resort was visited mainly because of the healing powers of the water. 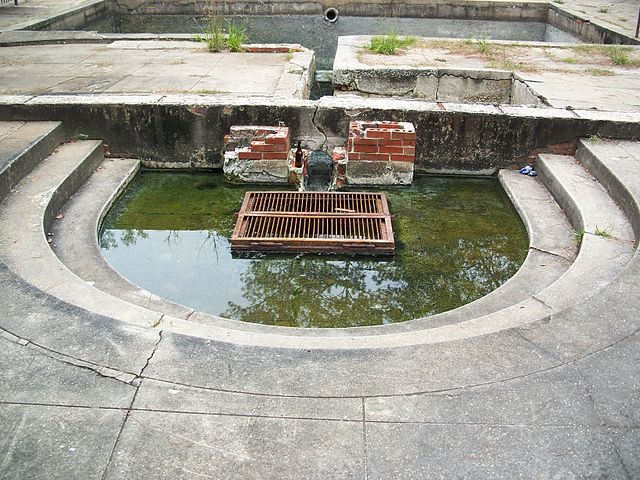 The pool is a reminder of the glorious past of the former resort/ Author: Ebyabe – CC BY-SA 3.0 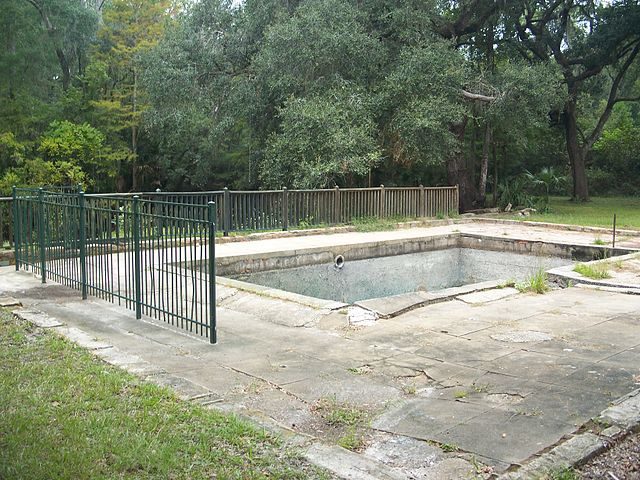 The site is in process of renovating/ Author: Ebyabe – CC BY-SA 3.0

Although the site is overgrown by vegetation, parts of the resort are still visible and recognizable, especially the swimming pool, which is a reminder of the glorious past of the former resort. The site is in process of renovation and the local authorities want to make the place available for picnic and public visits.

3. The Olympic-sized pool at Baker Hotel

The Baker Hotel is located in Mineral Wells, Texas, United States of America. The locals wanted to build an impressive hotel so that whole community could benefit from the city’s mineral springs. They started to collect money and Mr. Theodore Baker, a well known wealthy and influential person in hotel business, was chosen to construct the hotel. 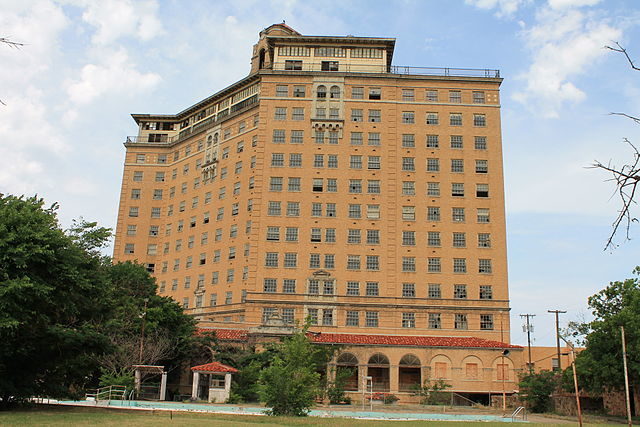 The ruined swimming pool is at the front of the hotel/ Author: Renelibrary – CC BY-SA 3.0

The building of the hotel began in 1926, but it was halted after Theodore Baker saw a hotel with a large swimming pool in California and decided that Baker Hotel should have one too. As a result of this, an outdoor Olympic-sized swimming pool was added to the plans. It was the first swimming pool built at a hotel in Texas. The number of luxuries, especially the swimming pool filled with mineral waters at the front of the hotel, attracted many guests.

The city’s spring waters were used for improving the health of the guests and it became a popular spa center. The hotel had its boom in the 1930s and 1940s but eventually closed in 1972 because of financial problems. Since then the hotel and the hotel’s swimming pool lay abandoned. The Baker Hotel slowly became overgrown by vegetation and was a frequent target of vandalism. In 2014 the city authorities began a major renovation and restoration project for the deteriorating building which was once  a symbol of the city.