Established as a medieval market town, many of the original 15th and 16th-century timber-framed buildings can still be found in Shrewsbury, in the county of Shropshire, England. The list of tourist attractions here includes the thousand-year-old beautiful red sandstone Shrewsbury Castle; Shrewsbury Abbey Church, a former Benedictine monastery that was founded in 1083; and Her Majesty’s Prison (HMP) Shrewsbury. Yes, you can book up a jailhouse tour of this former prison, a site which is popular with paranormal investigators who come here searching for the lost souls of the unfortunate inmates who were hanged within its walls.

HMP Shrewsbury is most famous for the huge number of executions by hanging that took place on it’s grounds. The first prisoner to be hung here,  on Saturday, August 15, 1795, was John Smith. His crime? The theft of 10 cotton handkerchiefs.

Because it is located just across the street from the site of a medieval prison called the Dana Gaol, HMP Shrewsbury is referred to by the locals as The Dana. It was built by the renowned Scottish civil engineer and stonemason Thomas Telford, a man responsible for the construction of a great number of bridges, canals, and tunnels.

Following the design of architect John Hiram Haycock, it was completed in 1793. There were 179 cells for male prisoners and 25 for females. At that time, all prisons in England were managed by local courts called quarter sessions, however in 1877 control was passed to central governance by the Home Office. Much of this prison was modernized and reconstructed at that time. The imposing stone gatehouse is one of the main original features which still remain today.

In the years from 1795 to 1961 there were 73 executions carried out at Shrewsbury. They included the killer Richard Wigley, executed in 1902 for killing his girlfriend, Mary Ellen Bowen. In 1951 it was the turn of Frank Griffin who was sentenced for killing Jane Edge.

The last among them was also the youngest. George Riley, aged just 21 years, was “hanged by the neck until dead” in 1961 for the robbery and murder of his neighbor Adeline Mary Smith. The 62 year old was found battered to death in her home. 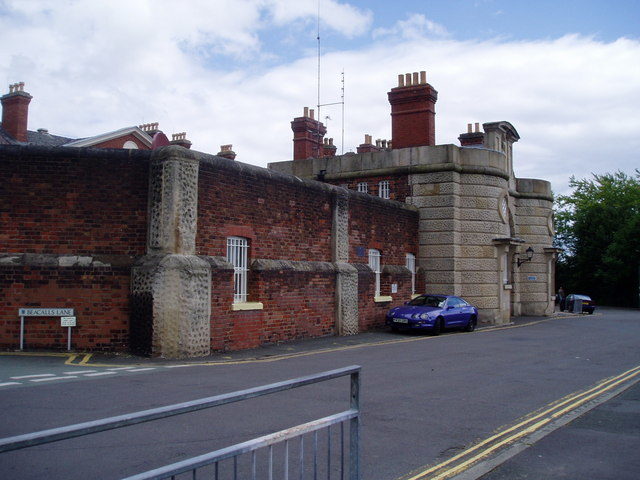 This final capital punishment was carried out by Harry Allen, one of Britain’s last official executioners. Many of the executions that took place at HMP Shrewsbury in the 20th century were under the hand of Albert Pierrepoint, a famous English hangman who carried out at least 400 executions in his long career.

All executions were carried out at 8:00 am sharp and, as was customary, the bodies were buried in the prison’s graveyard in unmarked graves.

Besides the monstrous number of executions, this prison was also known for it’s high suicide count. Ironically, some of the prisoners took their own life by hanging.

An enquiry was commissioned by Member of Parliament George Stevenson in 2004 to look deeper into this matter. In 2005, the report stated that HMP Shrewsbury was one of the most overcrowded prisons in England.

A further report that came in 2008 found that the prison, designed to house no more than 178 prisoners, was somehow holding 326. In an effort to reduce the population, only male inmates processed by the local courts could now be admitted.

To tackle the suicide problem, prisoners were offered to spend their time in one of the several workshops or educational programs. A Listener Scheme was also introduced. This is a peer support intervention for the prevention of suicide and self-harm which is run by The Samaritans, who train prisoner volunteers to support their fellow inmates.

Then at the beginning of 2013, there came an announcement that the prison would be closed. And so, in February that year, the last inmates were transferred elsewhere.

Eerily, platform 8 of the Shrewsbury railway station, which was used exclusively for the transport of inmates from 1868 up until World War I, remains disused to this day.

Once closed, the prison became a Grade II Listed building. It was bought by the Trevor Osborne Property Group who submitted a number of plans to redevelop the campus as homes and offices. After these were rejected by planning authorities, the prison was renovated as a tourist attraction.

As well as the regular history tours held here, it is also possible to try your hand at breaking out of the prison, or you can join a guided horror tour.

Due to it’s unique architecture and atmosphere, HMP Shrewsbury was used for as a filming location for the British television drama Lucky Man, and the television crime thriller Prey.

But having hundreds of dead in its cemeteries makes this place irresistible for paranormal investigators. It has featured in the paranormal reality TV series Most Haunted and Paranormal Lockdown.