Seven Terrifying Holes and Pits That Deserve Their Famous Reputations

Located across the world are a number of pits and holes that have either popped up out of nowhere or been created by mankind. While their depths are intriguing, there’s also a sense of fear surrounding them. This can be attributed to us not knowing what’s at the bottom, their locations and even the toxicity of some.

The following are just seven holes and pits that deserve their famous reputations.

We’re kicking off this list with a pit that makes us never want to visit it: Devils Hole. What’s more, it’s located in Death Valley National Park, which, y’know, has the word “death” in it. The cavern, which dates back thousands of years, is filled with water that has a history of “sloshing” around whenever an earthquake hits – from as far away as Chile, Japan and Indonesia! 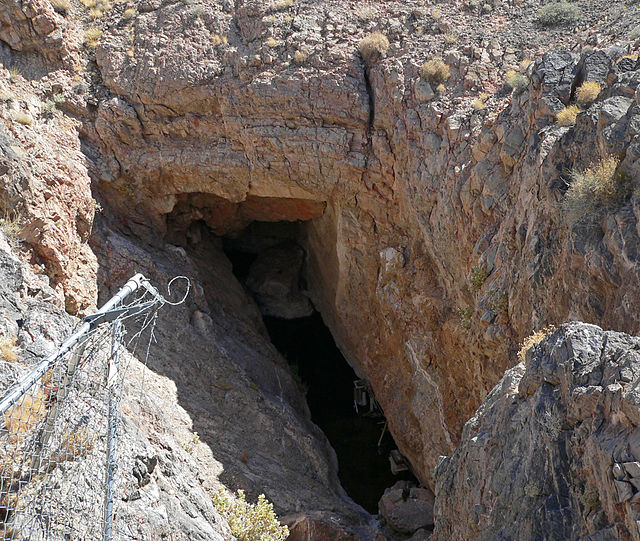 One of the most interesting things about Devils Hole is that it’s home to the pupfish, a critically endangered species that was the first to be deemed as such. We don’t know how something so cute could be living in a place named after the ruler of Hell.

Located in the city of Butte, Montana is the Berkeley Pit, a now-closed copper mine. It opened in 1955 and was in operation until 1982, at which time the water pumps were turned off and the pit slowly filled with water.

While it might be beautiful to look at, it’s actually a pretty dangerous place. Not only is the water acidic, with a pH level of 2.5, it’s also filled with dangerous chemicals and metals that have leached from the rocks, including arsenic, cadmium and sulfuric acid.

The Berkeley Pit is one of the largest Superfund sites in the United States, due to its level of contamination. (Photo Credit: William Campbell / CORBIS / Getty Images)

Due to its toxicity, the Berkeley Pit is part of the Silver Bow Creek/Butte Area Environmental Protection Agency (EPA) Superfund site. The federal program was introduced in 1980 to ensure the cleanup of contaminated locations. A water treatment plant was constructed there in 2018 and opened in late 2019.

Translating to the “Red Lake” in English, the Crveno Jezero in Croatia is a sinkhole located near the city of Imotski. It’s an absolutely breathtaking site, home to caves and high cliffs. The third-largest sinkhole in the world, its deepest point is believed to sit four meters below sea level – that’s pretty deep, considering how far inland it is! 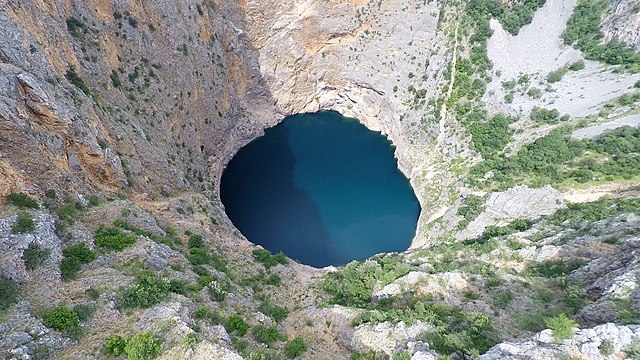 While archaeologists and historians are unsure how the Red Lake came to be, it’s believed to have been formed when a cave ceiling collapsed. There’s also a belief that the bottom may feature an extension, meaning there’s still a lot to be uncovered regarding the sinkhole.

Maybe that’s why we’re scared of it – we don’t know what’s at the bottom!

The Kola Superdeep Borehole isn’t something the public can actually travel down, but that doesn’t make it any less spooky. It is the result of a Soviet scientific drilling project, in which scientists attempted to drill as deep into the Earth’s crust as possible. Work began in May 1970 and continued on and off until 1992, with the hole closed off three years later. 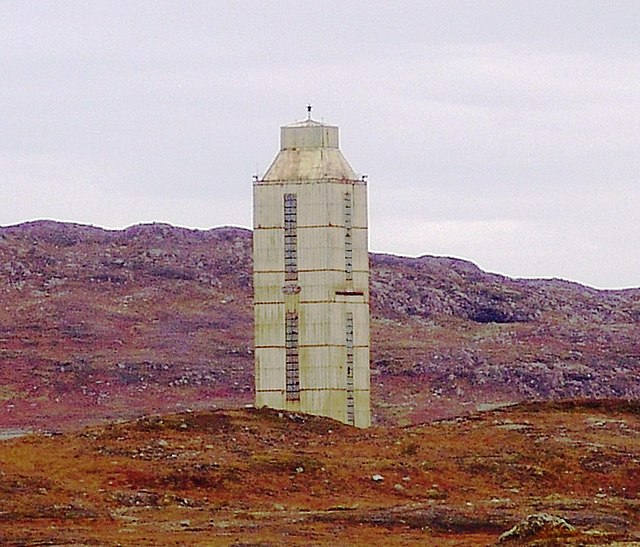 The Kola Superdeep Borehole is the deepest manmade hole on Earth and, according to the BBC, also holds the distinction of being the deepest artificial point. It’s so deep, in fact – 40,230 feet – that locals claim to hear “the screams of souls tortured in hell.” If that doesn’t make you not want to visit, we don’t know what will!

Nicknamed the “Door to Hell” and the “Gates of Hell,” the Darvaza gas crater certainly looks like it would be home to the devil. The crater is located in the Karakum Desert in Turkmenistan, and was caused when a natural gas field collapsed into the cavern below.

Following the collapse, and due to the risk to nearby towns, engineers made the decision to light the gases on fire. It was assumed the blaze would stay lit for a few weeks – 50 years later, it’s still aflame.

The Darvaza gas crater is also known as the “Door to Hell” and the “Gates of Hell,” due to its appearance. (Photo Credit: Tormod Sandtorv / Wikimedia Commons CC BY-SA 2.0)

Due to how closed-off Turkmenistan is to the rest of the world – it’s considered the second-most isolated country, after North Korea – the crater has played host to only a few visitors, including one who traversed all the way to the bottom. 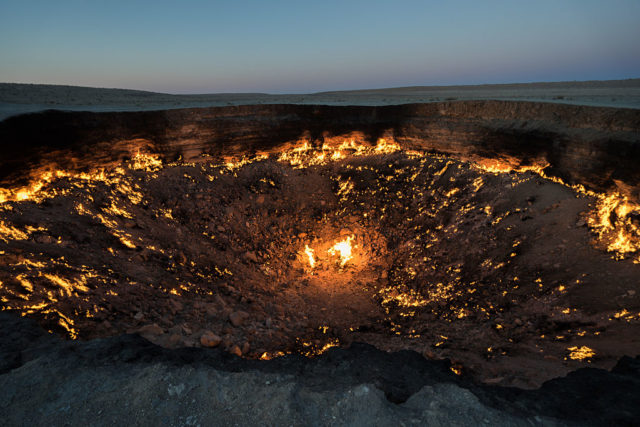 In January 2022, the country’s President Gurbanguly Berdymukhamedov told the media that he wanted to extinguish the fire, saying, “We are losing valuable natural resources for which we could get significant profits and use them for improving the well-being of our people.” If officials are able to somehow extinguish the flames, the Gates of Hell won’t look so hellish for long.

Are you scared of sinkholes and the ocean? If you answered “yes” to both, then you best skip this section about the Great Blue Hole. Located off the coast of Belize in the Lighthouse Reef, this underwater sinkhole, while gorgeous, is the stuff of nightmares.

It’s 124 meters deep, meaning very few have traveled to the bottom, which we’re certain is home to many scary and currently unknown sea creatures (we’re thinking the anglerfish from Finding Nemo, among others).

A number of famous explorers have traveled to the area, including Charles Darwin and Jacques Cousteau, and every one has said how awe-inducing the reef is. In 2012, it was ranked number one on the Discovery Channel’s “10 Most Amazing Places on Earth” list.

Currently holding the disputed claim as the deepest hole excavated by man, the Kimberley Mine – better known as “The Big Hole” – in South Africa is as beautiful as it is terrifying. The former hill became the go-to place for prospectors upon the discovery of diamonds some 150 years ago, and served as an active mine from 1871 to 1914. 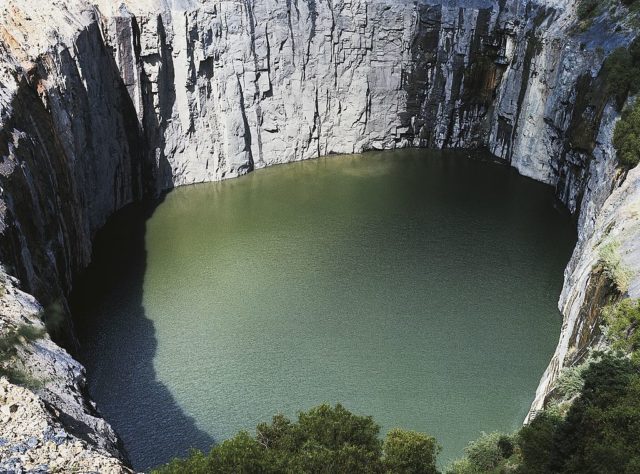 While in operation, the Kimberley Mine was primarily excavated by African laborers who wound up suffering from a wide variety of health issues, including tuberculosis and scurvy. There were also numerous casualties caused by rockfalls, runaway trucks and trams, and explosions, on top of reported violence. 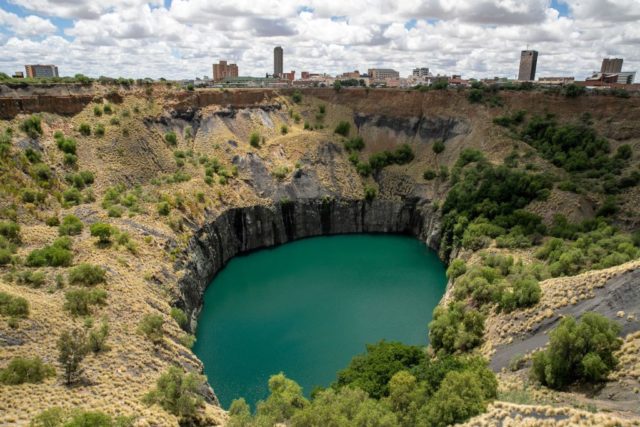 More from us: Six Secret and Forgotten Places Beneath the Streets of New York City

Following its closure, the mine became a tourist location for locals and visitors alike. While its teal-colored water is absolutely breathtaking, we don’t think we’d want to get too close. What if we fell in? We’d certainly die upon hitting the water, if not drown!