Norias of Hama in Syria: An excellent example of ancient technology used for irrigation & collecting water

It is surprising and fascinating how many ingenious projects and technologically advanced structures built by ancient civilizations can be found around the world. The builders and artisans from the past made such brilliant buildings that sometimes even modern scientists and archaeologists can’t give all of the answers about the techniques used during their construction. 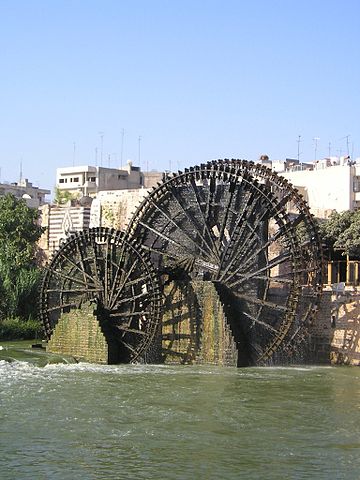 The monumental norias (“wheel of pots”), located along the Orontes River in the city of Hama in Syria, are a great example of a magnificent technique of the past. These giant waterwheels are part of the disused system that for many centuries supplied the city with water.

The water from the river was lifted to several small aqueducts which transferred it for the everyday needs of the people. Seventeen of these ingeniously engineered wheels can still be seen, but because of modernization they fell out of use long ago. The norias became a symbol of the city of Hama and have for centuries been a significant part of its landscape. 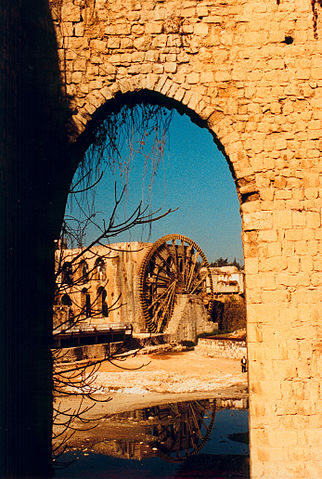 There are some traces which suggest that the norias were constructed around the city of Hama during the early period of the Byzantine Empire: a Byzantine mosaic was discovered in the site of Apamea (near Hama) that dates from 469, on which is depicted a water wheel. But many locals claim that much older norias once existed in Hama.

However the norias that can be seen today originate from the 12th century (Ayyubid era). It is also believed that the norias, the aqueducts, and the irrigation system were modernized and enlarged in the 14th century, during the rule of the Mamluks. 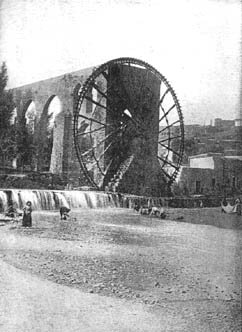 Al-Mohamadiyya at the beginning of the 20th century

As the power and influence of the Mamluk dynasty increased in the region, the importance of the city of Hama also grew, and soon it became a real oasis placed at the edge of the Syrian desert. During this period many new norias were built and the old ones were repaired and enlarged. It is believed that during the medieval period there were at least thirty full functioning norias. 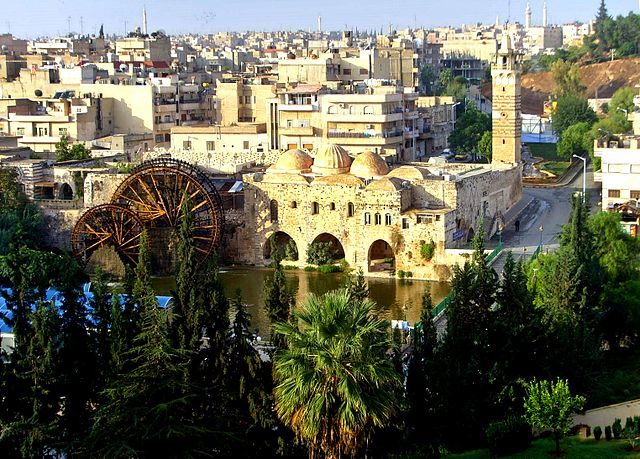 A view of the city

The technique used for running the norias is ingenious and in the same time quite simple, using only the basic laws of physics: river water is diverted through a channel into a sluice and consequently the flow of the water turns the wheel. As the wheel moved, the wooden buckets on the outside rim were filled with water and they emptied at the top, where the water was channeled along the aqueducts.

Using only gravity it flowed to the nearby houses and farms, as well as to distant parts of the city. Many cisterns existed which were used for collecting of the water. The water was shared fairly and there were enough norias to distribute an equal and abundant amount of water for all of the citizens in any time of the day. 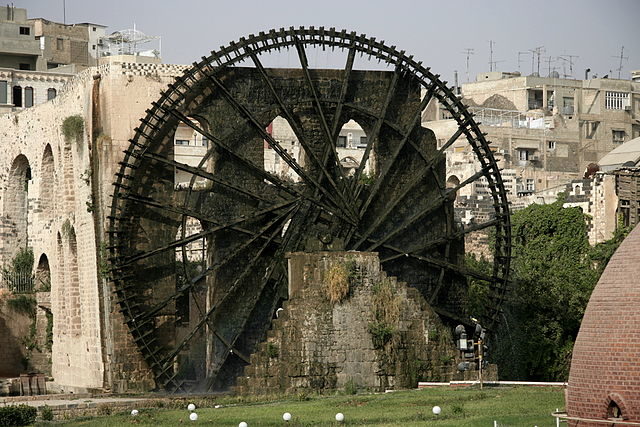 Noria and nearby houses

The norias weren’t used for other purposes, only for lifting the water up. For example there weren’t any other complex mechanical parts which would be used to run a mill. 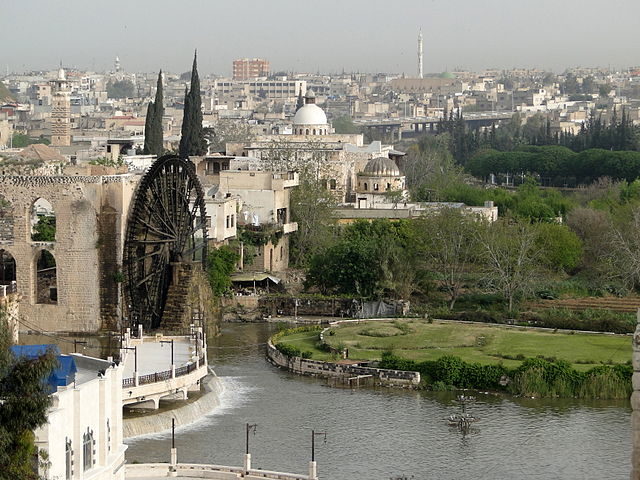 Another view of the city/ Author: Bernard Gagnon – CC BY-SA 3.0

The size of the norias of Hama vary approximately from 32 to 72 ft in diameter. The largest of them, called al-Mohamadiyya, supplied the Great Mosque with water. Parts of its aqueduct are still standing but in a slightly ruined state – what remains of the aqueduct ends nearly 330 ft away from the noria, but in the past it was much longer and had 32 arches. It started to operate in 1361 and is as the largest known noria in the world. 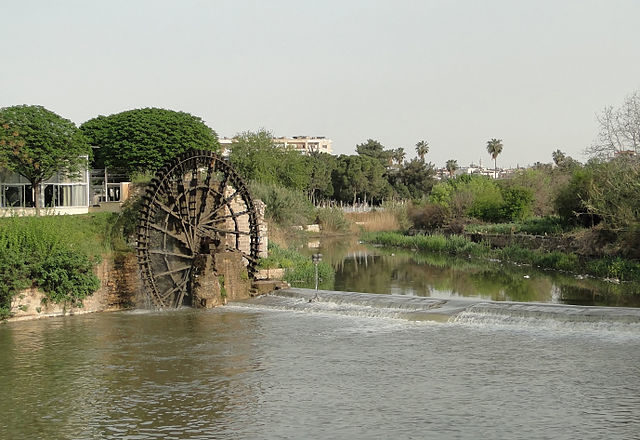 The norias are symbol of the city/ Author: Bernard Gagnon – CC BY-SA 3.0

The history of the norias is covered in shadows and there are still debates among scholars about their origins. According the writings of Marcus Vitruvius Pollio, a Roman military engineer, the first norias were invented by the Romans in the 1st century B.C. Some modern historians believe that they were invented in India in the fifth or fourth century B.C. and later spread in China and the west, but others think that their place of birth is the Near East during the Hellenistic period (1st century B.C). 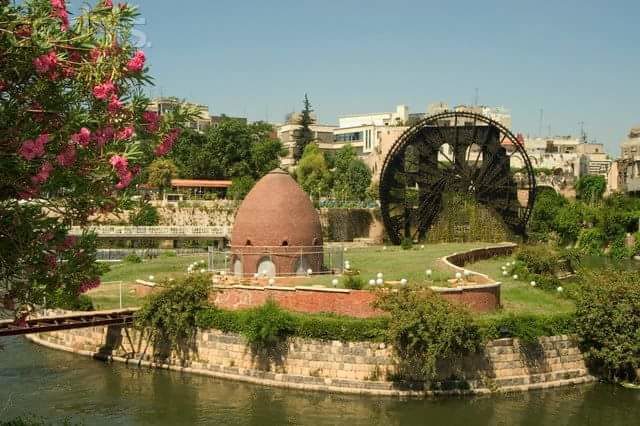 Whatever its root, Islamic engineers adopted this mechanism and certainly they improved it. Norias became popular in the Middle East and many historians believe that this technique of water management was crucial for the agricultural revolution in the Muslim world, which started in the 8th century. Parts of norias can be still found in Spain too, which are a heritage from the Islamic dominion of the Iberian Peninsula. 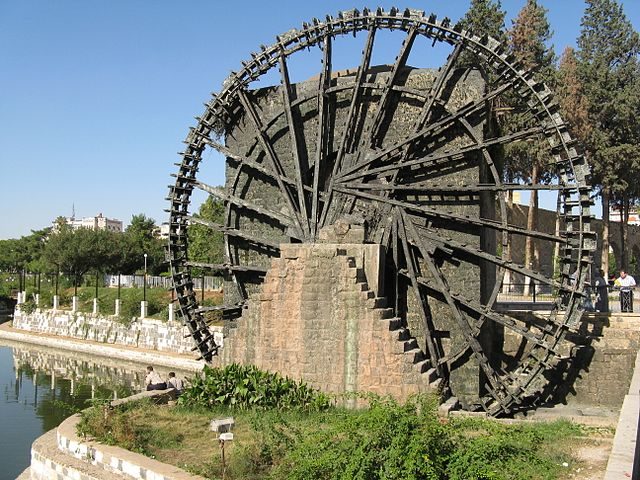 A heritage from the past/ Author: Alen Ištoković – CC BY 3.0

The norias of Hama had great, almost industrial, capacity. For example the largest of them had 120 collectors and could deliver 26.5 gallons of water per minute. This ingenuity from the past is maintained and protected by the Syrian government for future generations as part of the county’s cultural heritage. The norias of Hama are the largest surviving examples of this ancient technology.