A deserted village on the outskirts of the Arabian Desert

Al Jazirah Al Hamra, or Jazirat Al Hamra, (which means Red Island) is an abandoned coastal village placed on the shore of the Persian Gulf in the Emirate of Ras Al Khaimah, the northernmost and one of the seven emirates in Unites Arab Emirates (UAE).

It is believed that the site was inhabited since the 16th century. But some 50 years ago, oil and gas were discovered in the area and the process of the rapid death of this once thriving pearling center started.

After the unification of the emirates in 1971 it was completely abandoned. Now the abandoned village is a quite charming location that arouses the curiosity of many visitors. It is of great interest to the archaeologist, but also it is often visited by tourists and photographers.

The abandoned houses and other buildings are well preserved and they perfectly show the characteristic early 20th-century architecture of this former pearling port.

It has plenty of abandoned structures and narrow dusty alleys that provide for interesting exploring of the past of this part of the Arabian Desert, and great photographic opportunities. The site is especially favorite among fashion photographers.

Most of the inhabitants who lived there were fishermen and traders in pearls. The exact reason why this small and vibrant settlement was abandoned is still unknown.

One version of the story says that the villagers were asked by the local ruler to leave their homes, while according to another version they left on their own and moved a few miles away live in modern and more comfortable villas and houses. 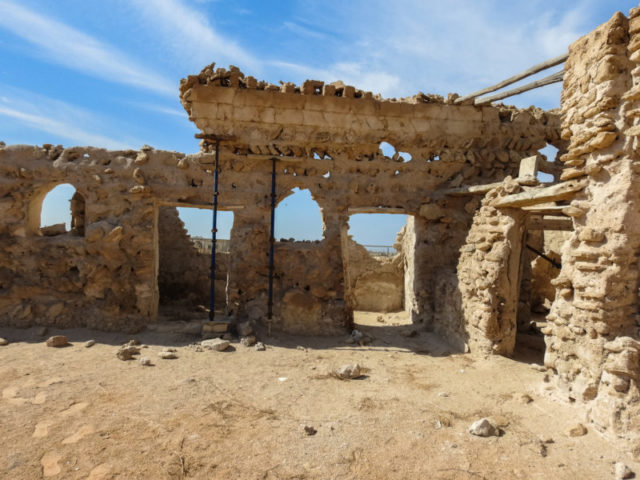 As usually happens with abandoned villages, there are rumors that the place is haunted and that is why it was left empty. In fact it is locally nicknamed “Ghost Village.” Probably the haunting rumors are only a product of people’s imagination, but without doubt this adds a certain romance to the entire place, which already has a romantic aura by itself.

However it is most likely that this ancient settlement is collateral damage of the modernization of the region.

This remnant of the past stands today into a divine quietness. The crumbling walls of the abandoned buildings in a ghostly silence tell the everyday life that is gone forever. The main paths zigzag through the former bustling oasis towards the sea.

Mosques, shops and houses with wooden doors, star windows, courtyards and wind-towers in a various degrees of decay can be seen all over the place. There are approximately 100 of these crumbling buildings.

The site was occupied by members of the Za’ab tribe. They were also called Hadhr (local term for coastal Bedouins). They came thousand of years ago from Yemen and traveled through Saudi Arabia where they adopted Islam.

Approximately 400 years ago the tribe decided to settle and they founded the village on the Al Hamra tidal island.

For many centuries their main occupation was pearling. But the 1930s economic crisis ended the successful business with natural pearls. A few years later they left their homes, shops and mosques and moved into modern homes attracted by the promises of the local authorities for better living conditions.

Since 1968 the settlement has remained abandoned and started to decay. Now it portrays the era before the exploitation of oil. The wind towers were built from mud and brick and they were specially designed to channel even the minimal breeze off the Gulf into the buildings.

Quite interesting technique used on the construction of the walls is the mix of corals and sea shells with stone and mud. Most of the houses were constructed from coral stone and the roofs were made of palm trunks. The oldest buildings have larger pieces of coral, while the “newest” ones were constructed only from bricks made of sand, seashells and crushed coral.

It is believed by many that jinns are living in the ruined buildings and that they come out at sunset to wander around, from dusk till dawn, under the desert’s bright stars. There are also stories of a ghost ship. 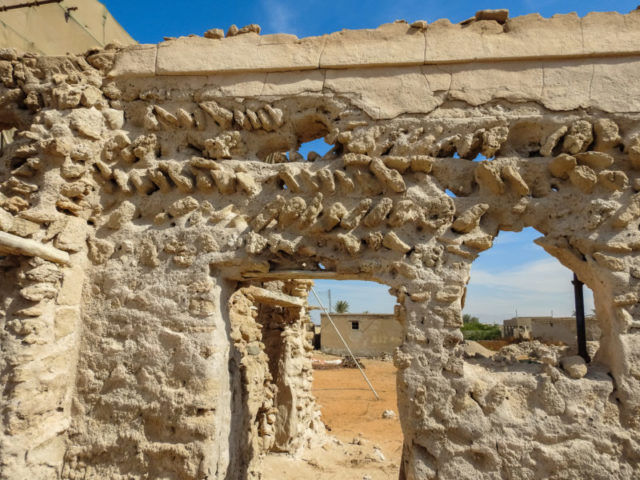 However, with or without wandering spirits, the ghost village is an authentic treasure and amazing piece of the past. It is the last traditional village in the UAE from the era predating oil that still stands practically intact — a witness of a simpler and more relaxed life. It is well preserved but certainly more has to be done in order to save this precious pearl for future generations.

Modern villas, hotels, and other ambitious luxury tourist projects have been built near the abandoned village. Now they only cast their shadows over Jazirat Al Hamra, but during their construction they became real threat for the further existence of this historic place.

For example one side of the shoreline doesn’t exist anymore, because it was filled with sand for the new projects. Most of the families still own the houses and refuse to sell them for eventual redevelopment. Instead of that the poor condition of the village alarmed them and they started to visit it more often.

The overgrown courtyards were filled with thorn bushes and goat bones, and the walls were painted with graffiti, but they cleaned up the place, covered the graffiti and refresh the site. The men who left the village now visit the mosque every evening and discuss the past and the future with their sons.

Even tourists and local businesses have donated money for the rebirth of this significant place. With this joint effort, the ghost village has started to take back its lost soul.

« Spier’s School: modeled on the old Glasgow University
Not even the biggest mansion in Scotland could be saved from collapsing into old mine shafts »