When man works together with nature wonders happen. Utilizing the available natural materials for construction and using the raw resources of nature for man’s purposes is a key for eternal success.

Scattered around the world there are structures, large buildings, and even entire cities, that literally seem like they were born out from the earth. Constructions like this are actively connected with the environment and their integration with the surroundings is so strong that enemies in the past, but also famous scientist in modern days, were easily deceived. At first sight, they thought that these creations were perfect work of nature. The ancient city of Jiaohe, now in ruins, can easily be said that caused such illusions. 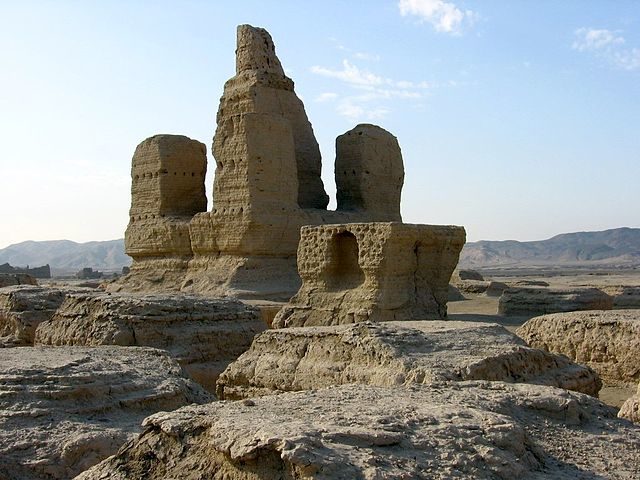 The remains of the ancient city of Jiaohe are situated in the Yaernaizi Valley, nearly at the edge of the current city of Turpan, Xinjiang Uyghur Autonomous Region, in the northwest part of China. The region a has turbulent and glorious past. Several civilizations left marks in the city of Jiaohe and in the neighboring area. Today the region is home to the Turkic Uighur people, who are culturally and religiously separate from the rest of China. They practice Islam and speak Uighur language. Jiaohe is a glorious monument of that past. 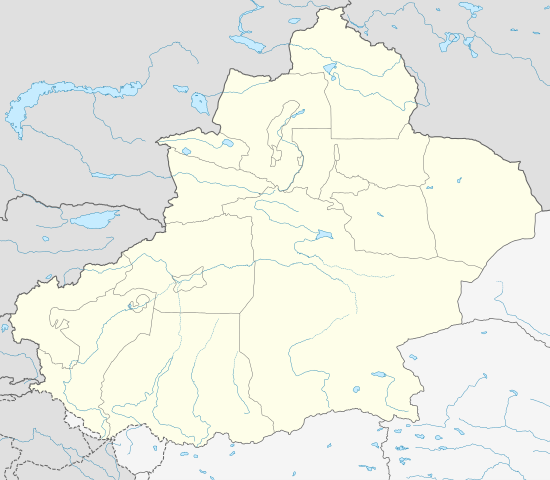 Archaeological discoveries show traces at the site of human activity from the end of the Paleolithic Period. But the area was permanently inhabited for the first time circa 1000 BC by the Cheshi (Gushi) people, who were a Caucasian race. The first structures on the river islet were erected by them around 300 BC, when they established the capital of their kingdom. This mysterious tribe was slowly assimilated when the region became part of the Han Empire. The members of the Han dynasty “opened” the Silk Road and started trade with the West.

They wanted to protect their profitable trading routes and so conquered the whole region. The small town and the former capital of the Cheshi people very soon was developed into a powerful garrison city and important trading center. In fact, Jiaohe became one of the most crucial spots on the Silk Road. Placed in the middle of the famous route, for many centuries it represent the unofficial gate and borderline between the East and the West. Jiaohe became an essential string in the interconnection between the two diametrically different cultural systems. 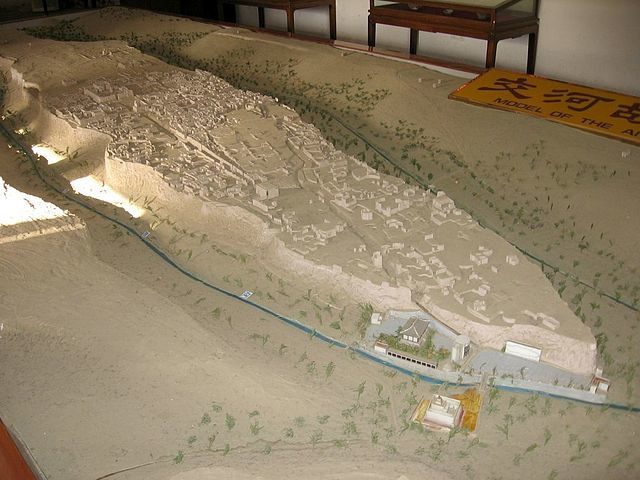 Model of the plateau on which Jiaohe is located/Author: Colegota – CC BY-SA 2.5 es

Later the Tang Dynasty governed the area. Actually most of the surviving buildings on the site are from this period. But the glory days of Jiaohe began to go with the wind at the end of 8th century. The city was under constant attacks from the neighbors: Uighurs, Huns, Mongols… It was critically ruined by fire and almost completely deserted during the Mongol invasion led by Genghis Khan at the beginning of 14th century. Some scholars believe that the lack of drinkable water was the second reason why Jiaohe was abandoned and never populated again. 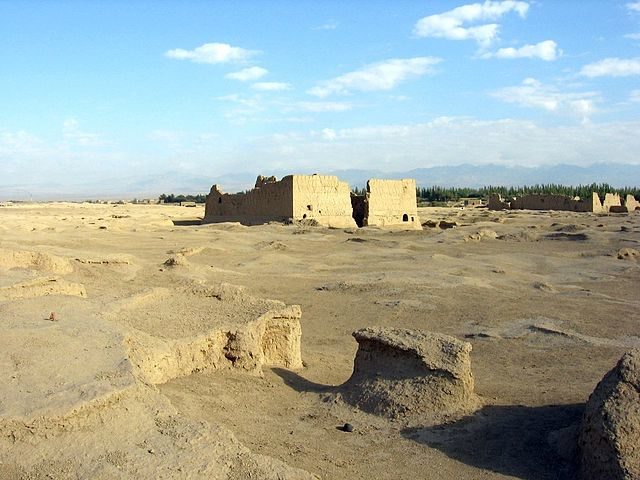 Almost all of the structures were constructed of earth/ Author: Colegota – CC BY-SA 2.5 es

The position of Jiaohe was absolutely unique. The city was placed on the top of a 30 feet high cliff and it was natural fortress defended from three sides by deep cliffs. Also, the cliff was placed on a islet between two rivers (Jiaohe on Chinese means “where two rivers meet”). It was naturally protected from all sides, that’s why additional walls to defend it weren’t built, as in other ancient cities. Jiaohe had only two gates: the South Gate and the East Gate. The South Gate was completely gone a long time ago and the East Gate is still visible and recognizable, although in ruins. Underground barracks for the soldiers were built near the gates. 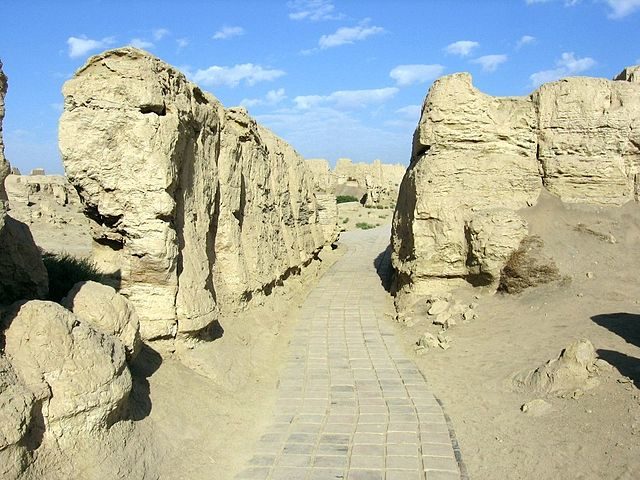 The residential buildings had two floors: one above and one under ground/ Author: Colegota – CC BY-SA 2.5 es

Jiaohe had one main (central) road. This 1148 feet long path that went through the South Gate divided the city into two residential parts. At the west side were located the houses for common people and on the east side lived the nobility. The northeastern area was the religious part of the city. There can be seen the remains of a Buddhist monastery, a big tower and more than 25 stupas (dome shaped holy places built by Buddhists). At Jiaohe were placed China’s oldest stupas. At the end of the religious part of the city were located the cemeteries and subterranean temple too. 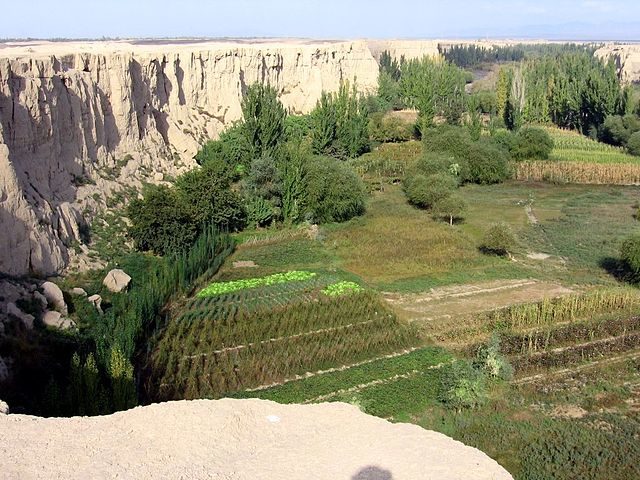 View from the plateau on which Jiaohe is situated/ Author: Colegota – CC BY-SA 2.5 es

Almost all of the structures were constructed of earth instead of wood. Some of them were carved into the cliff or dug in the earth, while others were built by piled up earth. There is only one large residential building made from brick blocks. All of the residential buildings had two floors: one above and one under ground. At its peak Jiaohe was home of more than 7000 citizens, of which almost 900 of them were soldiers. Although abandoned a long time ago it is well preserved. Maybe the lack of rain and the arid climate in the region through the last centuries saved Jiaohe from additional decay. The scholars, but also non academical visitors, have only superlatives for this precious remainder of the ancient Silk Road. They say that Jiaohe is the oldest, the most beautiful, the largest and the best preserved ancient city in the world. And, as it is said, feelings and numbers don’t lie: Jiaohe covered an area of close to 55 acres.