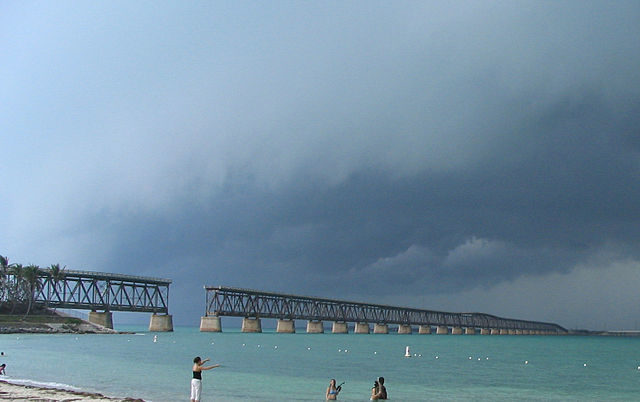 Today, the Bahia Honda Rail Bridge is in very bad condition. Parts of the bridge are missing and the surviving parts are slowly degrading. The strong winds and corrosion from the salty ocean waters are accelerating the natural rate of decay for this unique, 100-year-old bridge. 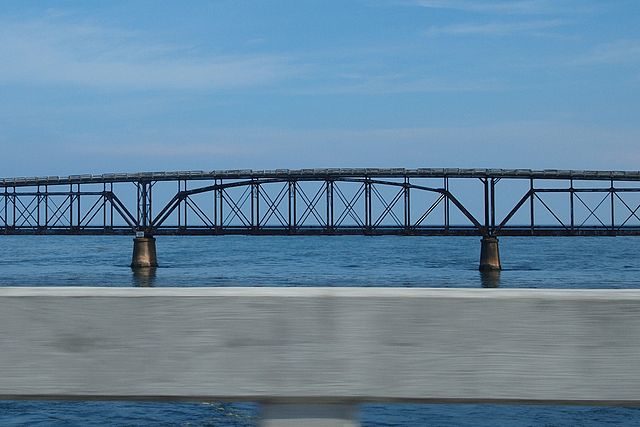 The bridge was the brainchild of the famous American industrialist and billionaire Henry Flagler and was originally constructed between 1905 and 1912 as part of a railway. He was a business partner and founder of the Standard Oil Trust with John D. Rockefeller. In the later phase of his career, he financed large infrastructure projects, all of them in Florida. He was also involved in the building of new hotels and as a result became known as the father of the city of Miami and the town of Palm Beach. 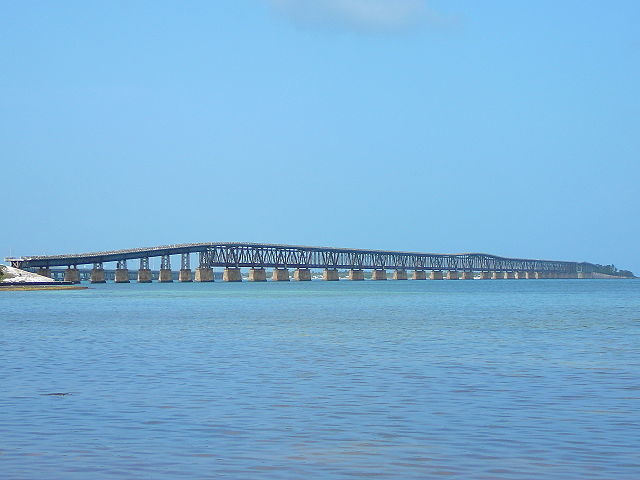 When the construction of the railway was finally finished, it connected the mainland with the southern part of Key West. For more than two decades, the bridge was a vital part of the Overseas Railroad, also known as the Florida East Coast Railway (FEC). The prime purpose of the railroad was to improve opportunities for rapid development to the communities, industries, and popular resorts along the Florida coast by connecting them. The railway succeeded in providing infrastructure for the eastern part of Florida along the Atlantic coast. 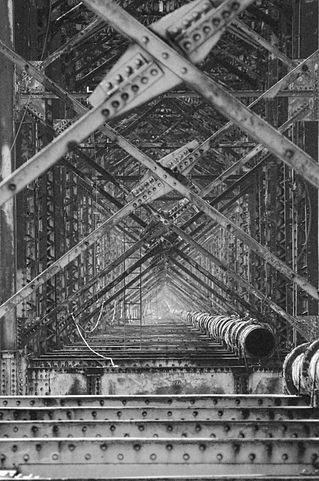 View underneath at Bahia Honda Key.

The building of the railway was an extremely challenging endeavor, and the Bahia Honda Rail Bridge was the hardest of all bridges to construct in Flagler’s railroad. The channel’s depth is approximately 24 feet at its deepest point, which means that during storms, the tides would be stronger and higher. To counteract this, it was built taller than the other bridges on the rail line. 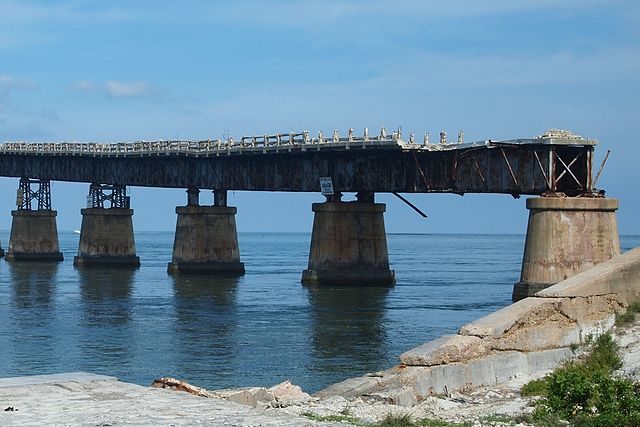 Bahia Honda Rail Bridge is a unique part of the railroad because it has a steel truss construction to make it especially strong. The other bridges were built mostly with concrete arch structures. 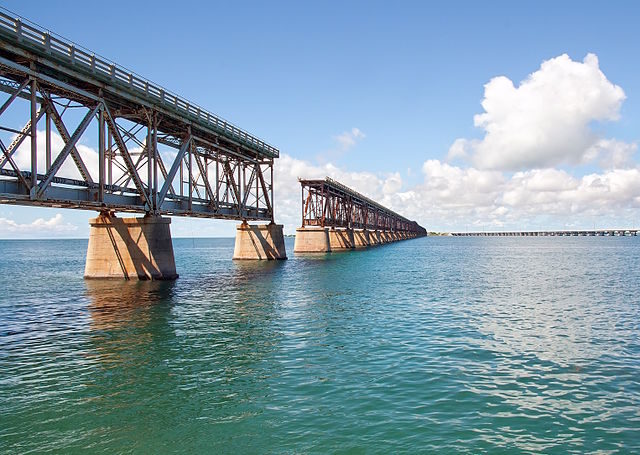 Parts of the bridge were removed. Author Mrx CC BY-SA 3.0

The region of Florida is often hit by strong storms and hurricanes. Florida was hit by several hurricanes during the railway’s construction and thousands of workers died while building the line.

In 1935, on Labor Day, one of the strongest hurricanes on record hit the Florida Keys, seriously damaging the bridge and parts of the railroad. Hundreds of World World I veterans died while working on another of the railroad’s bridges. The large project was abandoned and the overseas railroad came to an end. In 1938, the bridge was sold to the State of Florida, who transformed it into a highway. 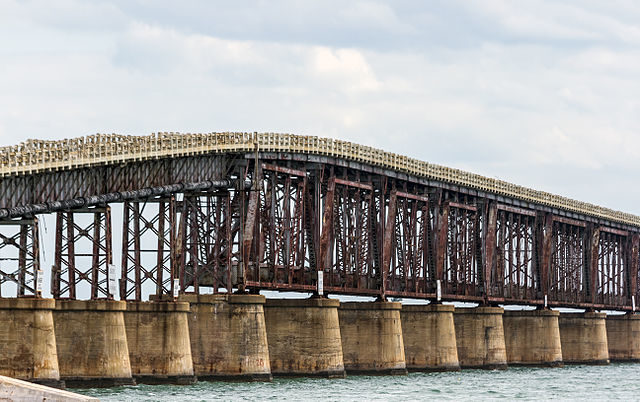 The authorities decided not to completely rebuild the bridge, but to repair and modify the existing structure. The lower level, which supported a single train track, was too narrow for two lines of cars, so a road was built on the top level. The bridge was used as the primary route to the islands of the Lower Keys. 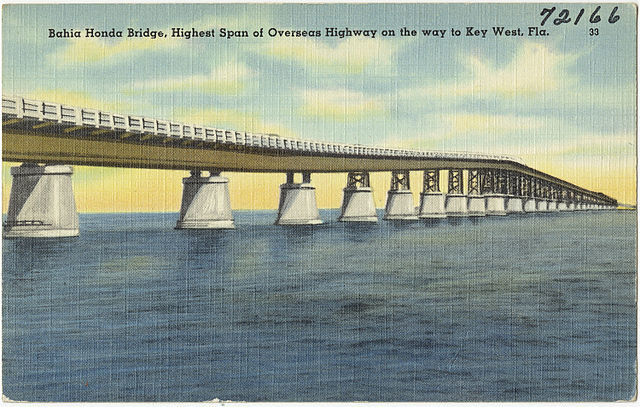 In 1980, a modern four-lane bridge was erected just a few hundred miles north of the old bridge. The Overseas Highway was rerouted to bypass the old railway bridge in favor of the new bridge. Two spans of the old bridge were removed to accommodate passing boat traffic. 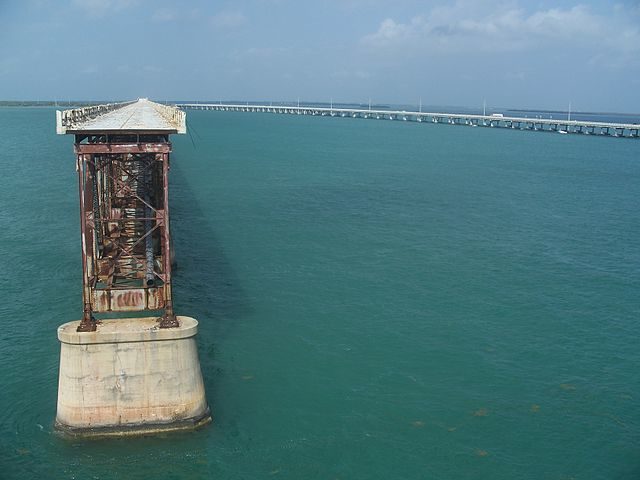 The old bridge still remains but in a severely dilapidated state. There are signs that warn the boats of falling parts from it. Today the bridge is a part of Bahia Honda State Park. The easternmost section is open for visits and it is used as a scenic overlook of the beautiful surrounding area.

« Kembla Fortress: One of the many WW2 coastal fortifications in Australia
Strange reasons why all these places became abandoned & derelict »