The Catacombs of Paris: an enormous labyrinth under the City of Light

At a depth of about 66 feet (equal to 5 floors of a building) the catacombs of Paris are a real labyrinth of tunnels and galleries. Inside the Paris underground are the remains of the bones of approximately 6 million Parisians. 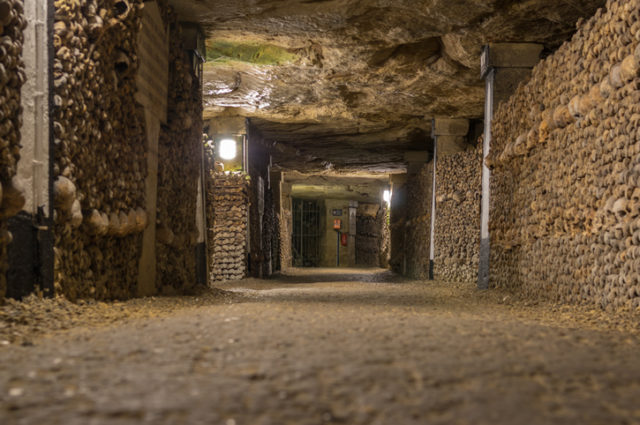 Human remains are stacked in the catacombs. 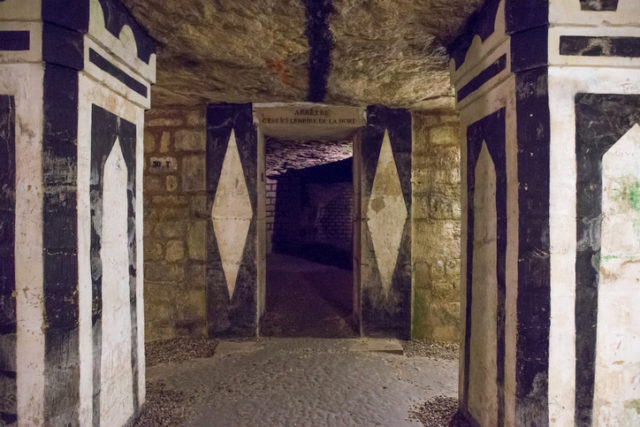 Entrance to the catacombs, the empire of the dead. Originally a quarry/mine for the building stones. 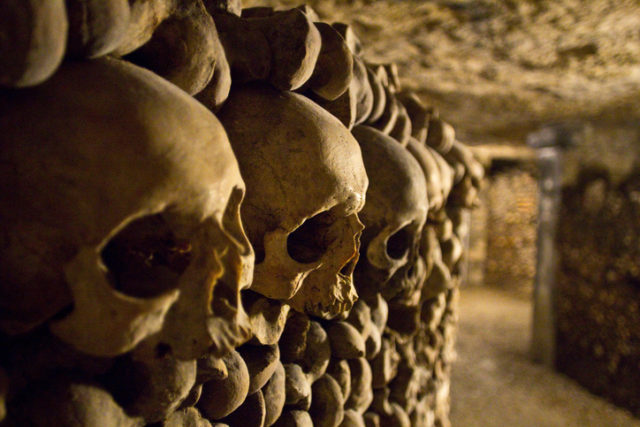 Skulls in the Catacombs of Paris. 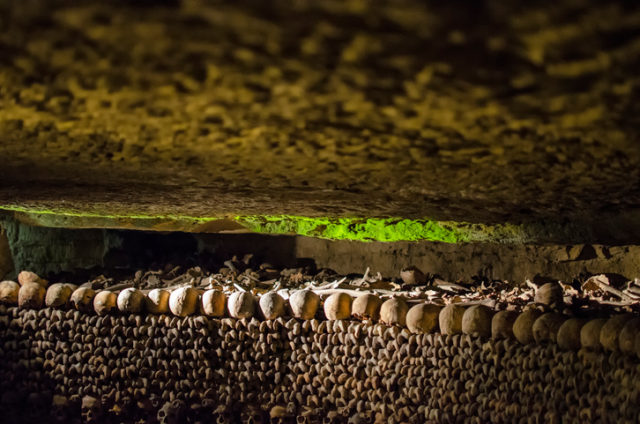 The Catacombs of Paris are located south of the former city gate and hold the remains of about six million people. The skeletons fill a renovated section of caverns and tunnels that are the remains of historical stone mines, giving it its reputation as “The World’s Largest Grave”. Opened in the late 18th century. 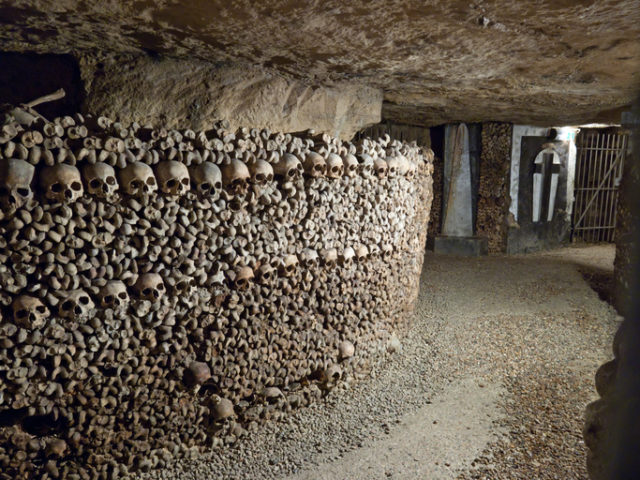 “In 1785, Paris decided to solve the problem of its overflowing cemeteries by exhuming the bones of the buried and relocating them to the tunnels of several disused quarries, which were consecrated as a cemetery. It is estimated that about one million bodies are buried here. Paris, France.” 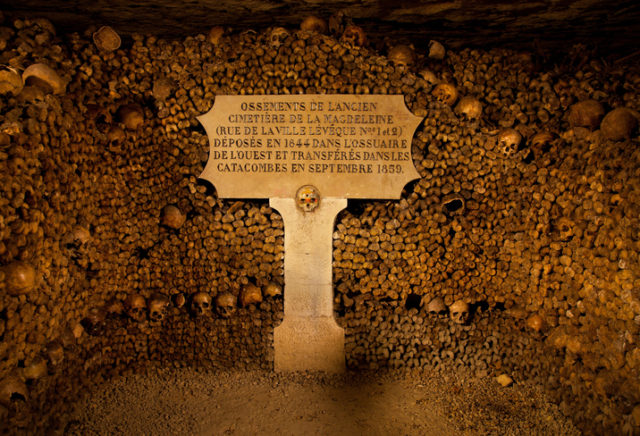 Piles of bones and skulls are arranged into a stack in the Paris’ Catacombs. 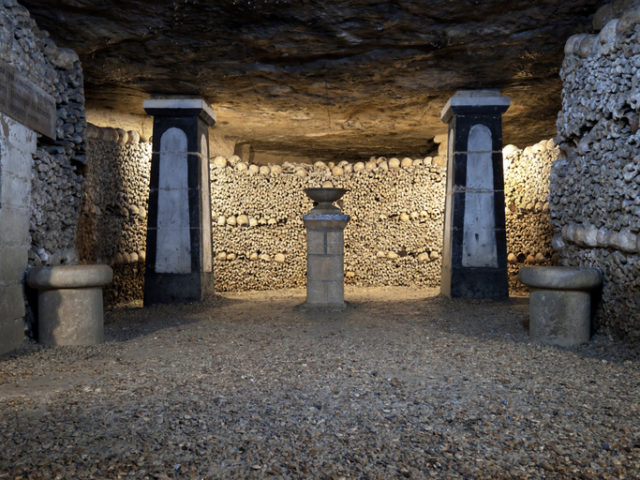 In 1785, Paris decided to solve the problem of its overflowing cemeteries by exhuming the bones of the buried and relocating them to the tunnels of several disused quarries, which were consecrated as a cemetery. It is estimated that about one million bodies are buried here. Paris, France.

This subterranean cemetery extends for a length of about 1 mile and is part of a much wider network of underground passages that were part of a quarry from which limestone, gypsum, and clay were extracted in ancient times.

The quarry, of a total length of about 177 miles, was exploited from Roman times until the eighteenth century when it was closed because of the collapses damaging the city’s surface.

The quarry was also exploited in the thirteenth century when the construction of the Louvre, Notre Dame, and the ramparts took a large amount of stone that Parisians found in the basement of the city.

The catacombs were opened in the late eighteenth century, when, to cope with the spread of epidemics caused by the saturation of some cemeteries (particularly Les Innocents cemetery), the State Council decided to move the bones preserved in mass graves in these underground quarries.

With the passage of time and the creation of a grim-romantic decoration, these ancient quarries have become a very picturesque place, a sort of museum of death.

Charles Axel Guillaumot took charge of managing the shift operations of the remains while his successor, Louis-Étienne Héricart de Thury gave the catacombs its current appearance in 1810. 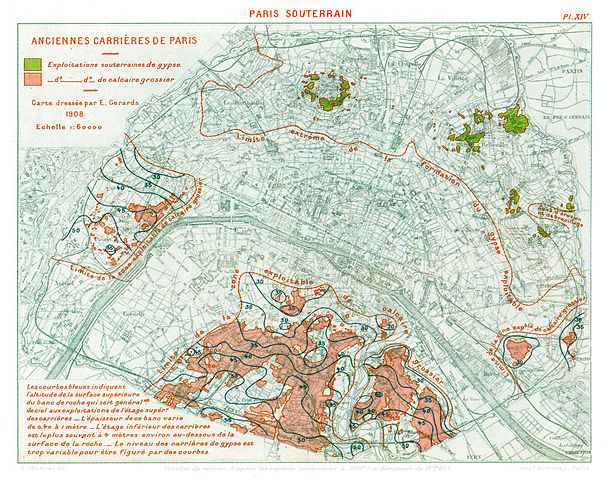 Map of former underground mine exploitation in Paris (1908)

Since the beginning, the catacombs have aroused the curiosity of Parisians. The catacombs became a place of tourist attraction and were open to the public in 1874.

During World War II, the tunnel network was used by the French Resistance to fight against the Nazi occupation. Since 2002, the Catacombs have been part of the Natural History Museum in Paris. Today, the catacombs are illegally explored by the urban explorers known as “cataphiles”.

The catacombs are an essential part of French popular culture. They have given rise to many stories and urban legends, including tales of Masonic meetings, black masses, Nazi gatherings, gang fights, and serial killers.

It is also said that the catacombs are the abode of Cybele, goddess of the earth, and a green man, half devil half ghost, with a long tail. It’s no coincidence that a genius like Victor Hugo drew inspiration from the famous underground tunnels for his masterpieces.

Inside there are several ancient stone sculptures. Also, there are modern-day art pieces. Many of the “cataphiles” go down there just to party or cause destruction. But some of them go in the catacombs to paint and to create.

As this large underground area is located just below the streets of Paris, in most of the city too tall or too heavy buildings cannot be built.