The Orpheum Theater is an old theatre that originally existed under a different name: the Majestic Opera House. The opening of the theatre took place on the same day that the Titanic sank, April 15, 1912.

The Orpheum Theater was the second oldest theater in the country, with the first being the Palace Theater in Los Angeles. The Orpheum is located at 1005 Water Street in New Bedford, Massachusetts.

In 1910, the French-Canadian charity Le Club des Francs-Tireurs (the French Sharpshooters Club) decided to create an impressive building in the style of fine art. The designer was Louis Destremps, who was known for working on such projects as the Notre Dame de Lourdes Church in Fall River, Massachusetts. 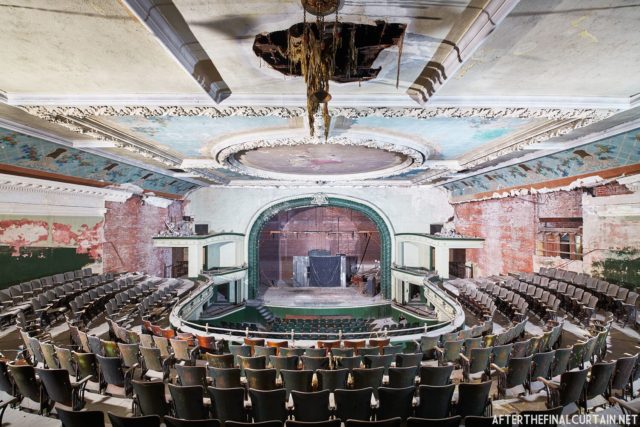 Destremps designed the building not only to include the theater but also a large ballroom, a shooting range, offices and meeting rooms, a gym, retail premises, and a shop.

Construction began in 1910 and was completed in 1912. Many of the locals gathered at the opening ceremony to watch the opening act of the Five Musical Durands.

The French Sharpshooters Club made a nice income from the ballroom and theater. The building had a central location, and shops filled Water Street around it. Also, a local trolleybus route ran through this street.

The theater offered seating to visitors in the lower and the upper levels as well as the balcony. Initially, there were 1,500 seats in the theater, as confirmed by the very first newspaper adverts for the theater.

Over time, the seats were replaced with those of a more modern design. However, when the theater closed, these newer seats were sold and the old ones reinstalled. After that, the capacity of the theater was 1,200 people.

For many years, the theater held various performances for the masses, including vaudeville, feature films, newsreels and series. It became famous for showing movies such as King Kong and Citizen Kane when it became the Radio Keith Orpheum (better known as the R.K.O.) Eventually, there were more than 400 theaters around the country that were associated with the Orpheum.

The closure of the theater took place in 1958-59. After closing, it was periodically opened for special events. In 1962, the French Sharpshooters Club sold the building to a tobacco company which used the building as a storehouse for its products.

The company decided to open a store in the back of the building. However, it was ultimately closed due to its poor condition and a lack of proper maintenance. As a result, the owner put the building up for sale.

The theater is currently privately owned by the nonprofit organization Orpheum Rising Project Helpers (O.R.P.H. Inc). Its purpose is to ensure and restore the Orpheum Theater and the French Sharpshooters’ Hall. They want to make it a public theater and a cultural center for locals.

A big thank you to Matt Lambros for providing such amazing photographs! You should check his page via this link.

Another Article From Us: The Beautiful & Abandoned Casino de Constanta

« Chorazin: Jesus Christ Put a Curse on This Place
The Pontiac Silverdome Stadium »