In 2001, residents of the Vietnamese city of Hue learned they were about to have a large water park called Ho Thuy Tien (Hồ Thủy Tiên) right on their doorstep. The company Hue Tourism decided that a water park would assist its aims of promoting Hue and attracting tourists to the city.

The company allocated 3 million US dollars (70 billion Vietnamese dongs) for construction of the park. In the design phase of the project, it was envisaged that the water park would be suitable for everyone: families, children, and adults.

In June 2004, the water park opened its doors and greeted the first visitors. However, construction was not fully completed at this time, meaning the park wasn’t living up to its promise. Such a failure would ultimately prove to be its downfall.

The park’s entertainment zone included pools and water slides, a palace with an aquarium, a virtual world room, shops, and a restaurant for more than 200 guests as well as an amphitheater. The owners wanted to cater to every possible need of the guests, and there were high hopes for the park’s success.

The most unusual and popular attraction was the three-story aquarium in the shape of a dragon. Guests could climb up some stairs located inside the dragon while viewing, on all sides, aquarium tanks filled with live fish and even crocodiles.

Unfortunately, during its two years of operation, Hue Tourism was unable to secure funds to complete construction of the water park. After the initial interest wore off, not many people wanted to go back to a half-finished tourist attraction. Consequently, the number of visitors decreased, Hue Tourism went bankrupt, and the water park was closed.

After the park’s closure, the company was under pressure from the banks, so it was obliged to sell the park to an investment and trading company called HACO, which was based in Hanoi. There were hopes that a new investor would be keen to restore and reopen such a huge and interesting project.

In 2012, HACO announced that they intend to invest another 1.5 million dollars in an effort to complete construction. The company also wanted to add office centers and spas. However, these ideas never came to fruition.

In the meantime, with every day that passed, the state of the water park continued to deteriorate as it remained abandoned.

It eventually became clear that Haco was not going to carry out the restoration it had promised. Such a delayed execution of a project is a violation of Vietnamese law. As a result, the contract with the company was terminated, and in 2017, the Hue City People’s Committee decided to acquire the project.

Management of the project had now been taken over local government, although the future is still uncertain.

The water park is located ten kilometers (six miles) from the city of Hue in central Vietnam and is situated near Lake Tui Tien. There are various ways to get there, and many urban explorer sites recommend ordering a taxi and writing the name of the park down for the driver. Alternatively, you can rent a motorcycle or drive.

Entry to the water park is generally prohibited, although this does not stop determined researchers and urban explorers. Websites suggest that there are several guards in the park who will allow people inside after paying an entry fee.

However, to some visitors, it can appear that the giant, three-story dragon is the guardian of this abandoned place as the aquarium towers over its surroundings. Its derelict state makes it even more intimidating than originally intended.

The rusty dragon is located above an artificial reservoir, the fullness of which now depends on precipitation. The dragon’s paint has begun to peel off, but graffiti still adds some color.

The stomach of the dragon was home to tanks of live fish and crocodiles. There was still water inside the aquarium for some time (before the tanks were smashed), but there were no live fish or crocodiles.

Visitors could ascend a spiral staircase to reach an observation deck situated inside the dragon’s open mouth. The observation deck is now decorated with graffiti, but this doesn’t detract from the incredible view that opens up to those who can get up there.

There was an amphitheater at the water park which used to hold various shows and events, but it is now also in poor condition and covered with moss.

Nature’s dominance can also be witnessed on the three remaining water slides which are overgrown with weeds on the inside and covered with graffiti on the outside. The slides lead into the pool, which is overgrown with algae.

Also on site are electricity boxes that are covered with dust and badly damaged, making them a threat to careless visitors. Added to the poor condition of the water park is the fact that broken glass, plastic bottles, bags, and various items of rubbish litter the ground.

Currently, the 50-hectare water park looks like the ruins of some forgotten, mystical age. Nature is in control of the park now, not humans. Stray dogs have made their homes there and cows graze on the land.

This place is so unusual that it has even tempted thieves, meaning that some elements of the park are lost forever. For example, there used to be a full-size baby elephant sculpture located near the children’s pool, which is no longer there. And a mermaid in a circular pool has her hand hanging off, possibly where someone tried to remove it and failed.

The future of this amazing place remains unknown, and it’s unclear whether it can ever regain its original glory and live up to the promise it showed on opening day.

Thank you to Les Gros Sacs blog for sharing such amazing photographs with us. This blog is about their 15-month trip around the world. Click the link and enjoy! 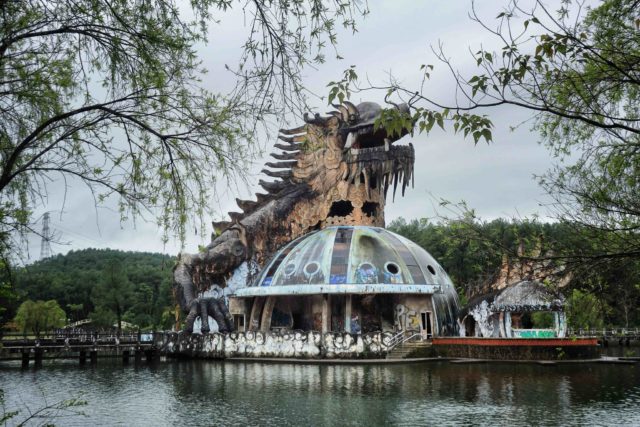 Another Article For Us: The Argentina Town Underwater for 25 Years