Why Were Nine Concrete Ships Scuttled Near the Mouth of the Chesapeake Bay?

Located near the mouth of the Chesapeake Bay, in Kiptopeke State Park, are nine sunken concrete ships. Constructed during the Second World War and scuttled to protect a now-shuttered ferry terminal, the vessels have become a tourist attraction and the makeshift home for numerous wildlife species.

The US government showed an interest in concrete ships

The concept of concrete ships dates back to the 19th century, but the US government didn’t show interest in the concept until the First World War. During the conflict, President Woodrow Wilson ordered the construction of 24 vessels. Only 12 were delivered, and none of them entered into service. 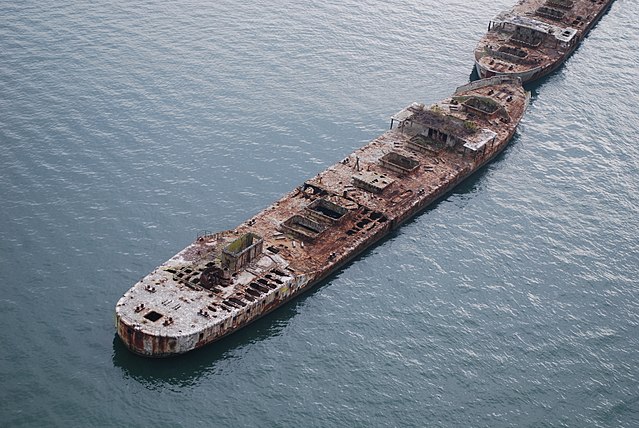 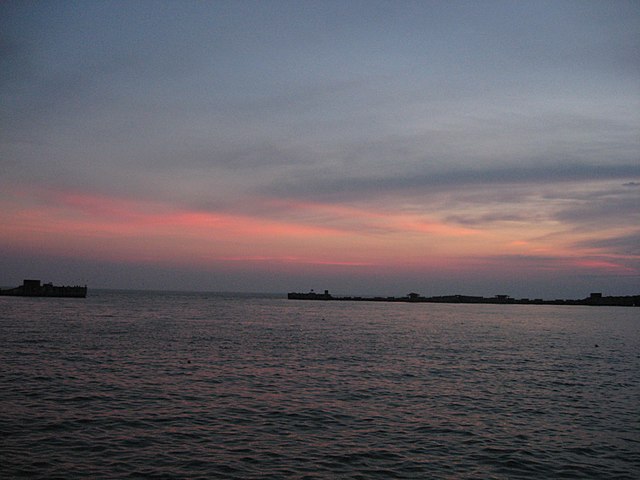 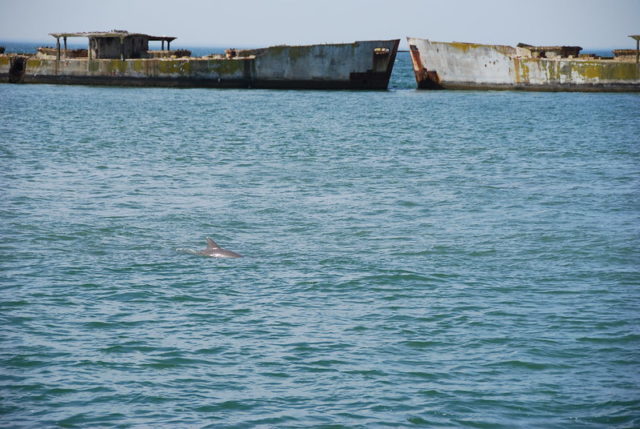 Interest in the idea reignited during World War II, when the government charged the US Maritime Commission with delivering a fleet of another 24 ships. The Commission gave the contract to McCloskey & Company, which began building the vessels in Tampa, Florida in July 1943. 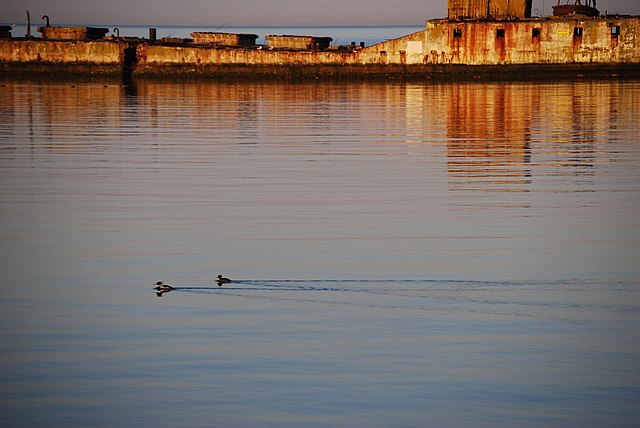 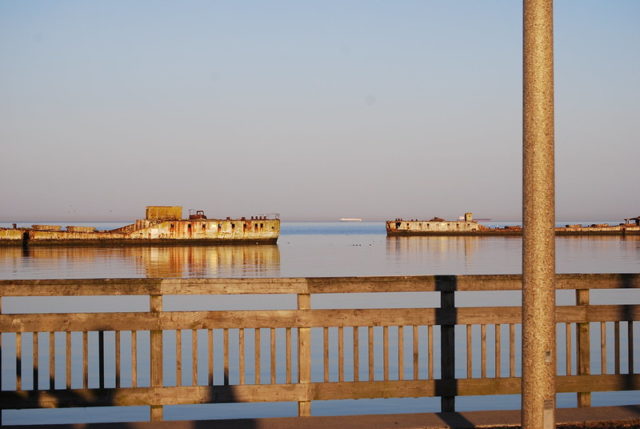 The reason the ships were built from concrete was that steel was in high demand during the war, whereas concrete was inexpensive and plentiful. They were constructed with ferrocement. Not only did this prevent the hull from cracking, but allowed McCloskey & Company to deliver their quota in record time, at a pace of one ship every month.

In honor of their concrete construction, the vessels were named after pioneers in the development of the material. 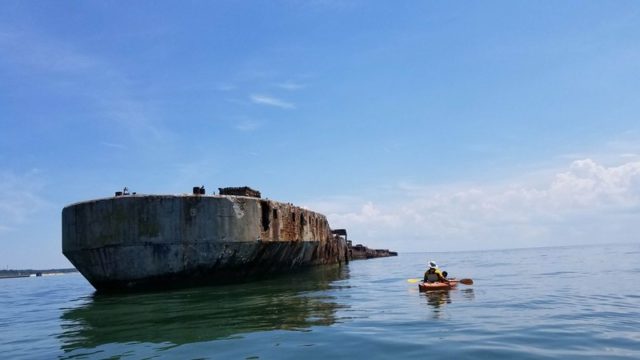 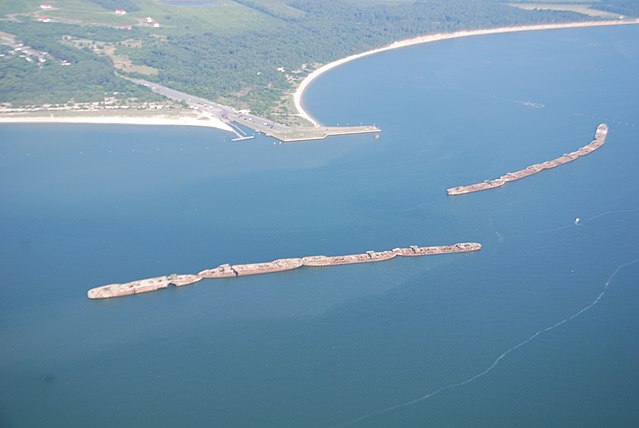 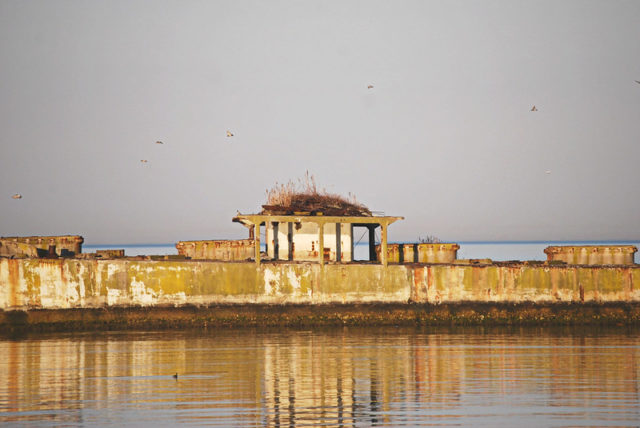 While 24 concrete ships were built, only two saw service in Europe. The SS David O. Saylor and Vitruvius joined the fleet participating in D-Day, and were sunk 1,000 yards off the shores of Normandy to create an artificial breakwater. This calmed the waters around the area and allowed smaller landing craft to deliver additional soldiers.

The other ships served as training and transport vessels in the South Pacific.

The vessels were scuttled and became partially submerged in the Chesapeake Bay, protecting the area from the effects of severe weather. 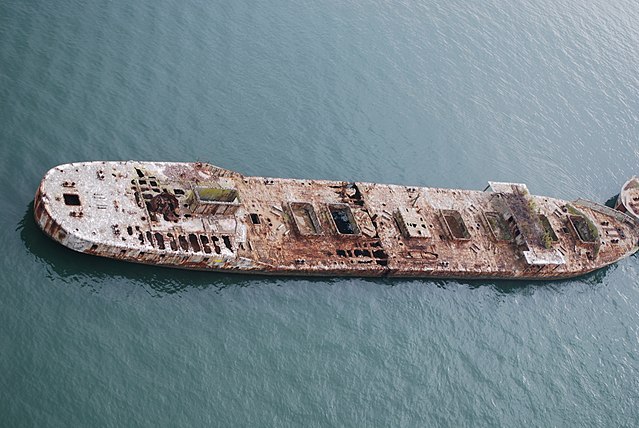 Less than 20 years later, in 1964, the Chesapeake Bay Bridge Tunnel opened, providing local residents with an easy way to travel across the mouth of the bay. The ferry terminal closed soon after, with the decision made to keep the ships where they were.

The Kiptopeke concrete ships continue to protect the shoreline

Despite the ferry terminal closing down, the concrete ships that were scuttled in the Chesapeake Bay remain half-submerged in the water. Not only do they continue to protect the shoreline, they’ve also become home to numerous bird species and sea life.

During the warmer months, scores of ospreys, brown pelicans, seagulls and cormorants nest on the ships’ decks, which have since become covered in moss. Below the water’s surface, cracks in the concrete have created a superficial habitat for the likes of rockfish, flounder, oyster toads and bluefish. 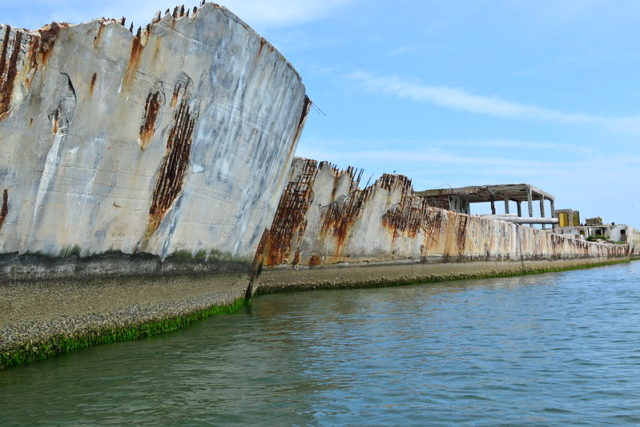 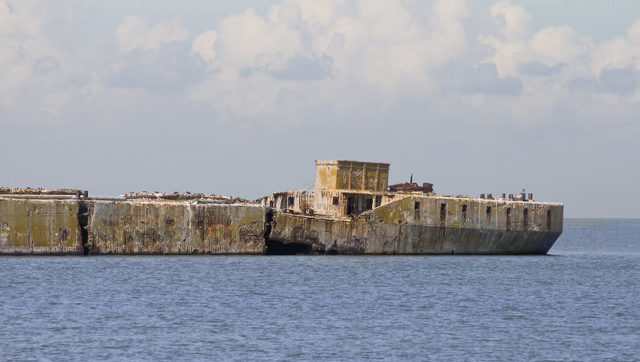 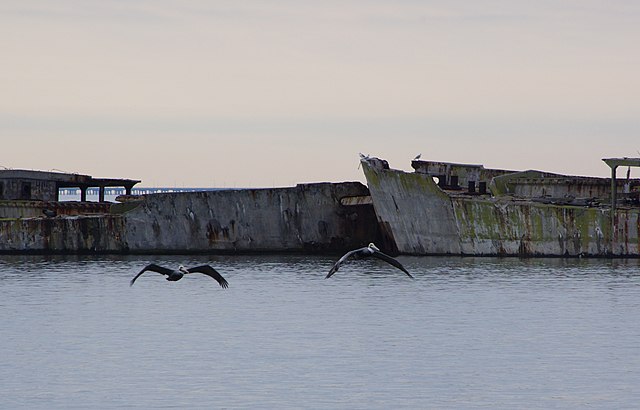 More from us: The Graffiti-Covered Belgian Village of Doel Has Been Given a New Lease on Life

While home to various animal species, the concrete ships aren’t without their hazards. Exposed rebar has created rather unsafe conditions directly near the vessels, prompting park officials to post signs telling visitors to maintain a distance of at least 50 feet. That being said, kayak rentals are available during the summer months, allowing boaters to paddle out to the area and admire the large concrete structures.