The ruins of the Rosewell Plantation house in Virginia, USA: A silent remainder of a life that disappeared in flames a long time ago

A red brick skeleton hidden between old trees and completely open to the elements. Piles of the original bricks overgrown with vegetation, especially with the invasive poison ivy, at least 12 fireplaces, four chimneys, and one wall that still stands proudly. And without doubt a lot of history which waits to be heard. This is what is left from the former glory of a majesty known as one of the most beautiful and largest American mansions in the colonial period. The ruins are located in Gloucester County, Virginia, with a view over the York River. 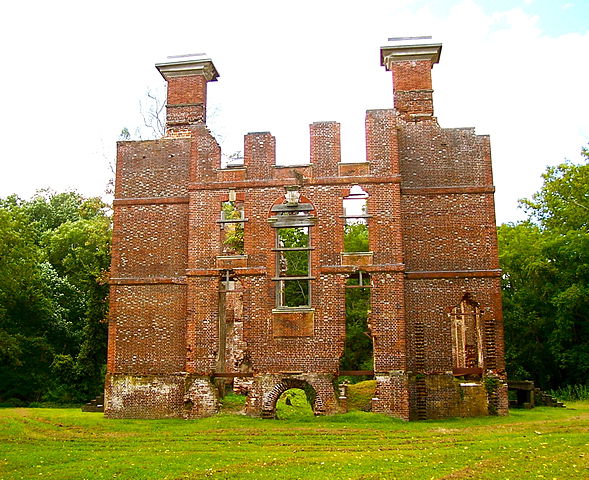 Today the remains of the mansion give only a glimpse of its past beauty. The ruins have a mysterious appearance that lift the curiosity and the imagination.

Certainly, the mosquitoes are now the only inhabitants, and according to local oral legends, probably some female ghosts wander around it’s long forgotten rooms. Unfortunately, the ruins of the plantation house are crumbling constantly under the sun and they cry out to be seriously preserved. 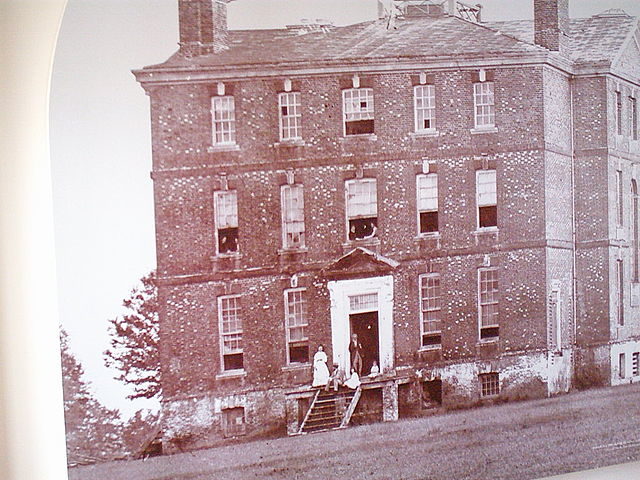 It was constructed in 1725 and for more than 100 years was home of the Page family, one of the first families to settle in Virginia. They came in the Virginia Colony and put down roots in Gloucester County in 1627. The construction of the mansion was started by Mann Page. He was a man of grand ideas who wanted to have a home that would be larger than the Governor’s Palace in Williamsburg. It was built mainly from bricks, made on the site, and exclusive materials like mahogany and marble that were brought from England. The detailed Flemish brickwork, its imposing three floors, and the location of the mansion were carefully selected to evoke the image of the popular luxurious London houses of the period. But Mann Page didn’t see his work completed; he died several years before the end of the enthusiastic project. His wife and son, Mann Page II, finished the construction of the mansion in 1737. 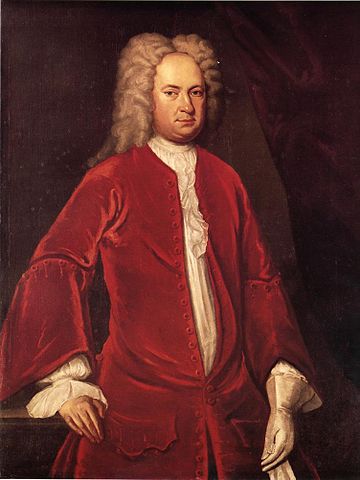 The interior was richly decorated and stylishly painted. It had four rooms on every floor and a central staircase. Originally the house had a flat lead roof with a small wall on the edge and twin octagonal cupolas at each corner. There were also an ice house, few outbuildings and several stables constructed near the main house. It was positioned in the middle of the large Rosewell Plantation, approximately 3,000 acres, planted with tobacco and grain. Virginia throughout the 18th and 19th centuries was the center of American politics, and during this period Rosewell Mansion hosted many glamorous balls, important gatherings, and gala parties.

It is believed that Thomas Jefferson, who was a frequent guest, wrote the first version of the Declaration of Independence in the “Blue Room,” which was placed on the northwest corner of the second floor of the mansion. He was a  schoolmate and close friend of John Page, the grandson of the Mann Page. But this may well be only a rumor because, according to historic documents, Jefferson was in Philadelphia almost the entire year of 1776. 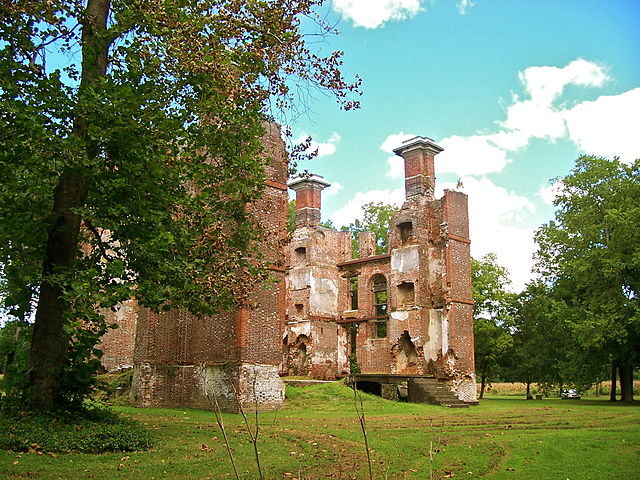 Rosewell Plantation remained in the ownership of the Page family until 1837. After that, the mansion and its land passed through the hands of four or five different families. Because the maintenance of such grandeur was extremely expensive, the new owners started to sell parts of the property and luxurious pieces of the mansion. At first, the lead roof was taken off and sold, and later the marble flooring and mahogany paneling had the same destiny. 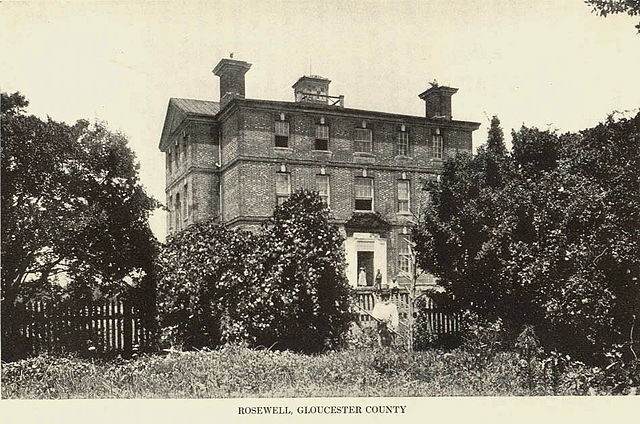 Before it burned to the ground in 1916

The mansion survived the turbulent years of the American Revolution and the American Civil War, but unfortunately,

it burned to the ground in 1916. The owners could do nothing except watch the house become reduced to ashes in the course of a few hours by a fire that is thought to have started due to a broken chimney. The roof collapsed and the interior was completely destroyed. They succeeded to save only small items. 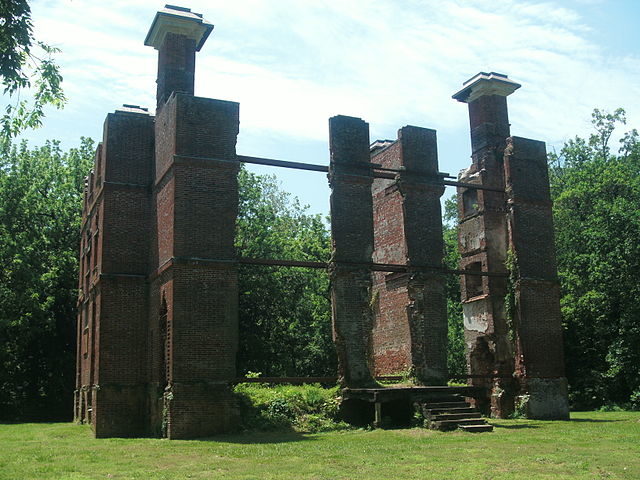 The last owners left their home and didn’t want to reconstruct it. The ruins continued to crumble due to the weather conditions, aided by vandals who helped themselves to anything they could salvage from the wreckage. It started to be overgrown with vegetation. 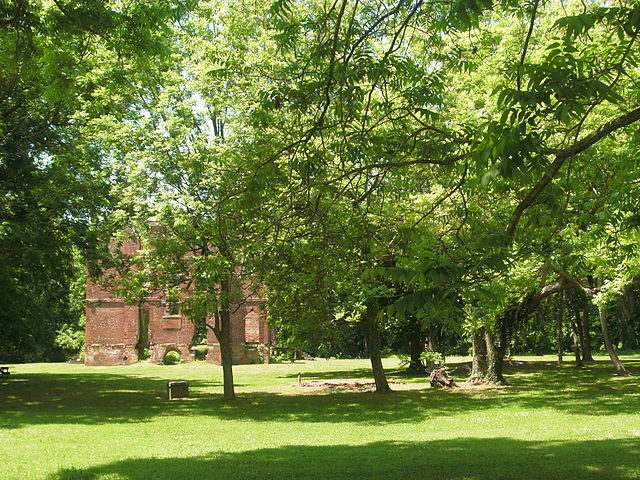 In 1979 the owners donated the ruins and the surrounding land to the Gloucester County Historical Society. Now a foundation manages the site. It was put under several archaeological excavations in which many artifacts from the past were found which vividly depict colonial architecture and life. Urgent preservation and some cleaning of the invasive plants was also done. Now the east wall, the wine cellar, the foundations, and four chimneys tell a rich history, which wasn’t only a bright one, but also connected with slavery: as plantation owners, the Page family owned a great number of slaves. According historic documents from the 18th century they had at least 111 registered slaves.

« Harshaw, Arizona – Skeletons of the past
The two faces of Tartu Cathedral in Estonia: One half is ruined and practically abandoned, the other half is reconstructed as a museum »