West Pier, Brighton: where no one walks anymore

It was a place where excitement and joy were common, where millions of people came just be part of its concerts and funfairs and tearooms. But no one goes there anymore for this place is nothing but burnt wooden remains. A fire-storm completely destroyed this pier. Its story though prevails.

The pier came to be during the 1860s. At that time there was a construction boom and this pier was but one of the dozens of piers that were constructed throughout Britain. The man behind the design is Eugenius Birch, an English architect and civil engineer known for the piers he constructed, among which was this one, West Pier in the city of Brighton, England. 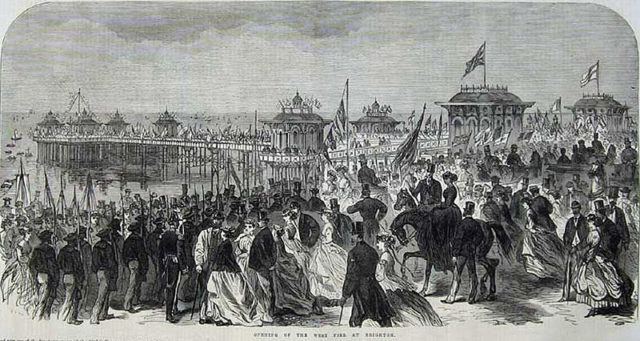 The pier was a paradise for visitors, who came to enjoy the seaside and the sea air. But the design of the pier and its toll houses was something that the wealthy people of the day found distasteful. They objected that the toll houses would completely destroy the view that these people had from their houses. 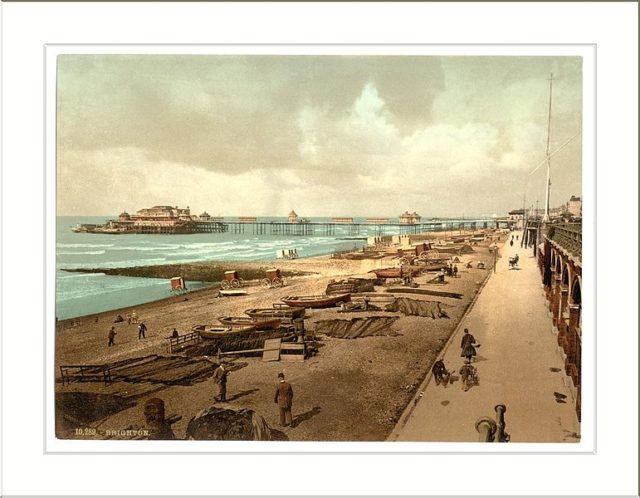 View from the east. Author: Snapshots Of The Past CC BY-SA 2.0

Nevertheless, the construction of the pier was found to be a positive thing for the economy and a permit was granted. It was finished and opened on October 6th, 1866. It stretched for 310 meters into the sea with a width of 94 meters. Cast iron columns ingeniously driven into the seabed held the pier in place.

The whole pier was an elaborate affair. There were gas lamps ornamented with serpent-like details. The toll houses themselves were also richly ornamented. Eugenius Birch’s design also incorporated glass screen that was mounted at the end of the pierhead so that the visitors were somewhat protected from the blows that the sea would undoubtedly give to the pier. 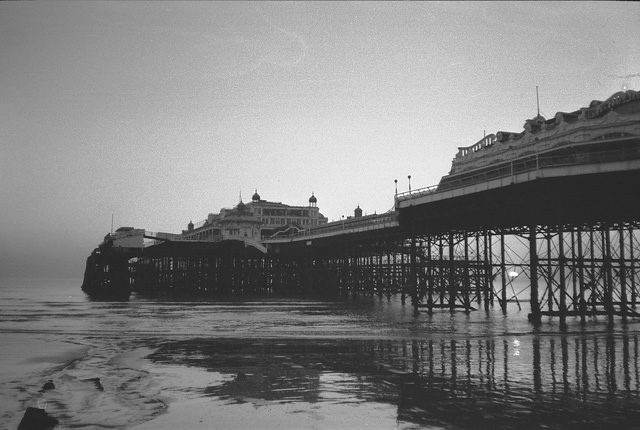 Years later, in 1893, the pier went through its first extension. A pavilion was added, supervised by Eugenius’s nephew, constructed cleverly making it capable of welcoming about 1,400 people.

At the turn of the century, the pier was witness to a tragedy. Seven sailors died, drowned while they were trying to approach the pier with their ship, the HMS Desperate. The use of the pier was dramatically changed. From fresh sea air to fresh public entertainment. And it was a good choice, for millions of people came to West Pier. According to the statistics, about 1.5 million people visited the pier from 1910 to 1911. 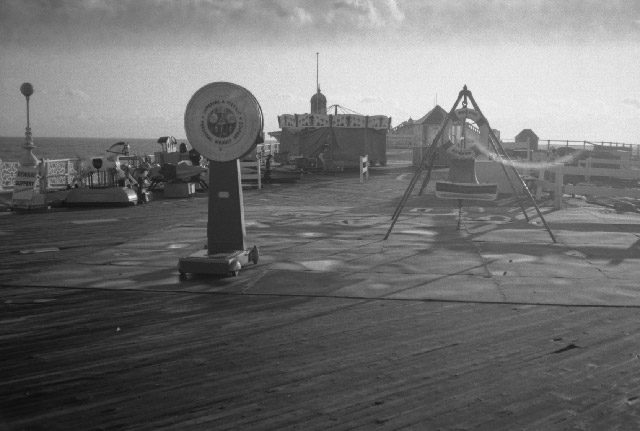 When the First World War came, the pier fell out of use, but it was quickly restored once the fighting was over. After World War I, even more people came to visit West Pier. West Pier was further improved when a concert hall was added to the pier’s attractions. 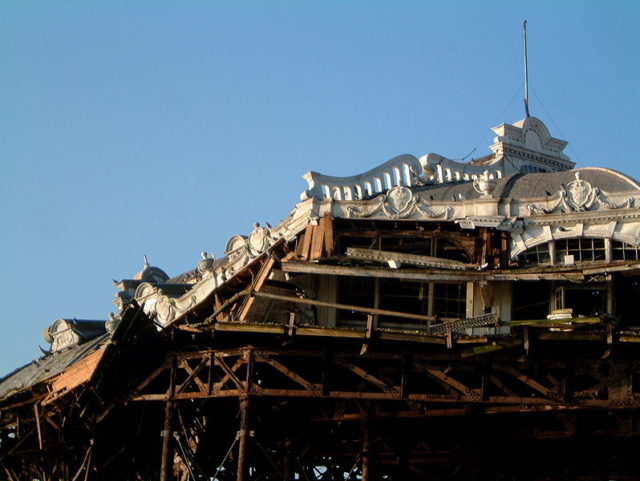 The concert hall itself was further improved in 1916 and was officially opened on April 20th, 1916. The beginning of the end for West Pier came during the Second World War when the pier’s docks were removed to prevent enemy ships from reaching the coast. That is when the pier fell into financial troubles. In 1965, it was sold to a company who failed to return its former glory. 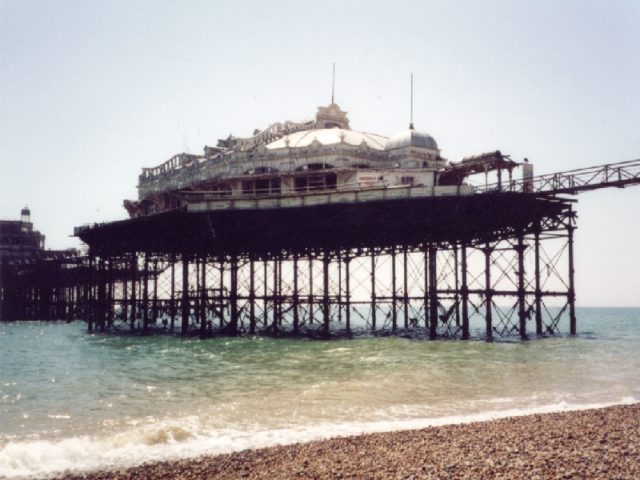 The costs for maintenance kept increasing and in 1970, the pier was closed for safety reasons. What followed were unsuccessful attempts to save and revamp the pier. In 2002, a storm hit the pier and part came crashing down. But the true damage happened on March 28th, 2003, when the pier caught fire. 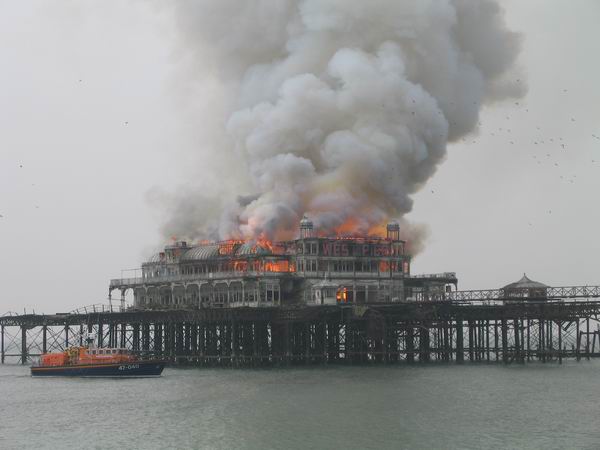 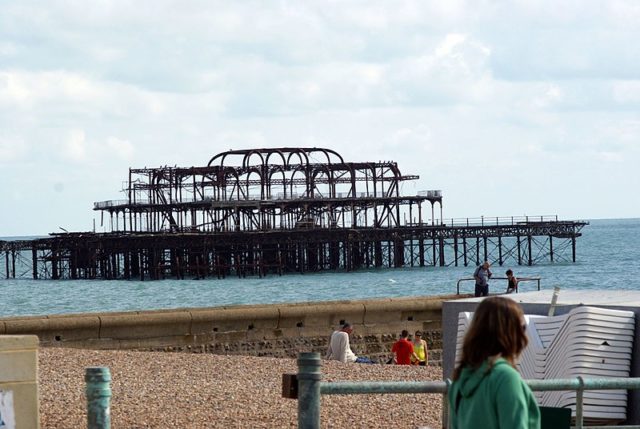 The aftermath was that the pier was lost forever. All that remains today is a rusty skeleton that is continuously pounded by waves, although its history is well remembered. According to theargus.co.uk, “Experts previously estimated it would cost £1 million a year to preserve the West Pier in its current state and up to £100 million to restore it to its original splendour.”