The Lonely Mojave Phone Booth: The Only Phone Booth That Has It’s Own Tombstone

If you ever find yourself lost in the Mojave desert and out of reception, don’t worry, there’s a public phone you can use. Not just that, if you are in any luck, you just might get surprised by a phone call and have a nice chat with a complete stranger.

At least that was the case until not so long ago when the booth was removed for good. The phone booth put in the most peculiar place in the middle of nowhere with no paved road in sight had its own website at one point in time and inspired many stories.

Some of them even got an official theatrical release. For instance, John Putch’s drama “Mojave phone booth” starring Annabeth Gish and Steve Guttenberg gave the booth life on the big screen in 2006.

An inspiration for many as it surely was, this booth holds its own interesting story as well. A story that led to its sudden rise in fame and glory, and ultimately to its demise.

Upon its removal, being a cult favorite for many, people even gave this lonely booth a tombstone to commemorate its existence. 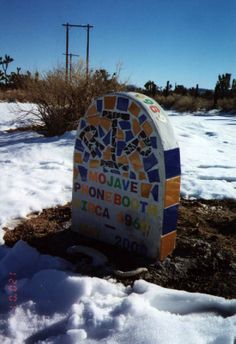 Anyhow, originally the booth was installed in the 1960s at the request of Emerson Ray, the owner of the Cima cinder mine, so it can be of service for the local volcanic miners that used to work and live there. Now completely deserted, that area is part of the Mojave National Preserve in California.

It’s location, when we look at it now it might be a bit odd, but at those times it was very strategic and was one of the many booths placed by the California government. They intended to give the locals that lived in the isolated places of the desert some form of connection and assistance in their dire needs. 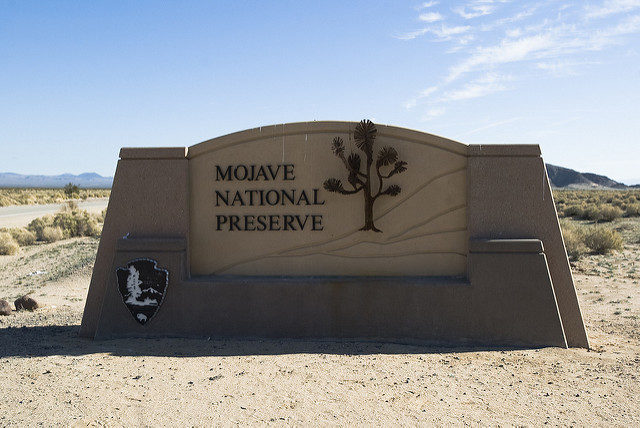 However, with the depletion of the nearby mine and the abandonment of the Cima settlement, which is now a ghost town, the booth was of no use for anyone, anymore. So, it became an intriguing relic for people passing by, raising questions if this god forsaken area was once a place where people commuted. 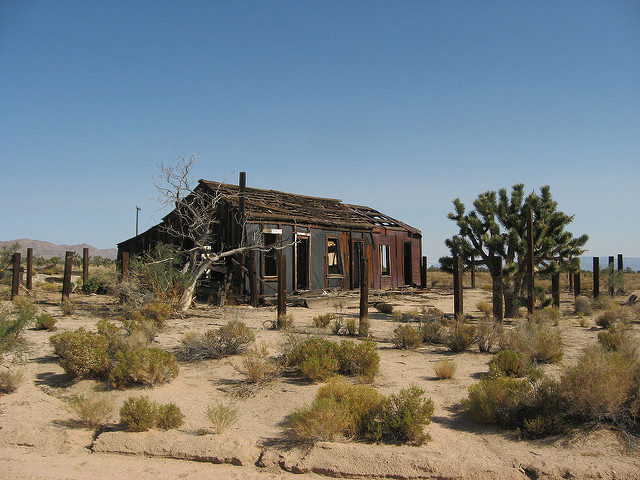 Cima is a small community in the Mojave Desert of California. It was once the main settlement for the miners. Now only a few people live in the area and is considered a ghost town. – By Ken Lund – CC BY-SA 2.0

Deserted and alone, the booth was standing for decades on an intersection of two remote dirt roads were almost no one passes. In 1997 a man surprisingly spotted a phone booth icon on his map and strangely curious about it explored the place. He wrote a letter about everything he found, including the phone number of the booth and decided to give it to a local underground magazine in Los Angeles. The man who read it, Godfrey Daniels, was the man who actually started it all.

He dialled (760) 733 9969 not sure if the number and the booth were real. The phone was ringing, but no one answered. He dialled again, and again, and inclined his friends to do the same. Suddenly, one morning he got a busy signal, so decided to dial obsessively in order to get in touch with the man on the other side.

Soon enough, a man, one of the few left living in the vicinity picked up the phone and they started chatting. Godfrey made a web page about his experience afterwards, mentioning the location of the booth as its phone number in it. Soon enough and thanks to the internet, the booth became a sensation, and the phone, once silent, was now ringing off the hook, becoming some strange form of an accidental prototype of an internet chat room, offering anonymous interaction and unexpected conversations to complete strangers. 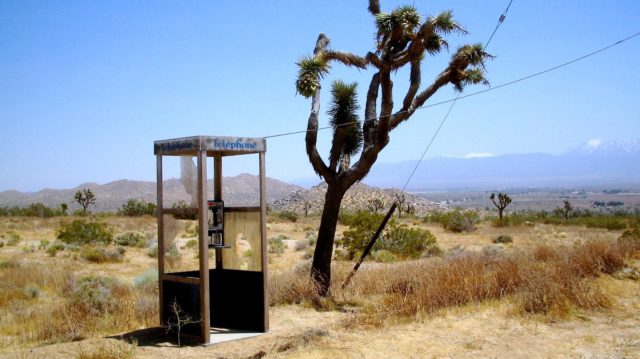 Picture of the Phone Booth standing in the middle of nowhere, 13 kilometers from any road in the desert – By Mwf95 – CC BY-SA 4.0

Although popular, the phone booth, located on a nature preserve, was becoming a nuisance to the National Park Service. The phone was ringing constantly disturbing the wildlife, not to mention the tourists that came in large numbers to worship the place. Some were even saying that they were waiting for a call from God.

Too famous for its own good, the booth was finally removed in 2000, but people kept coming. They even built a tombstone where the booth used to stand. And it makes us wonder, if it weren’t for that first phone call, the phone might still be there reminding us that things change, and communities can become desolated ghost towns in just an instance. Yet again, as things stand right now, it might be the only phone booth that got its own tombstone, and people are actually sad to see it “pass”.