The ruins of St. Agnes Catholic Church lie in the LaSalle area of Detroit in Michigan, USA. When it was built, the area had not yet begun to develop so the church was far from downtown Detroit and in a rather isolated spot, but that would eventually change.

In 1910, the LaSalle district consisted of only 12 houses, but at the beginning of the 20th century, the city of Detroit was developing rapidly.

The leader of the Detroit Catholic Diocese, Bishop John Foley, acquired a plot of land in anticipation of building a church there in the future because it was clear to him that the city would eventually spread to this spot.

He was correct because by December 1914, 200 people had moved there and a community had sprung up.

In early 1914, Bishop Fowley hired the Reverend Chaz E. Henigan to lead the new church. In April of the same year, Henigan held the first St Agnes mass in a nearby house.

After that, a temporary church that could seat 200 was erected because the congregation grew so much.

Since the temporary church was proving so successful, the construction of a school and a monastery for the St. Agnes parish began. The school was built in 1916, and the monastery was constructed a year later. 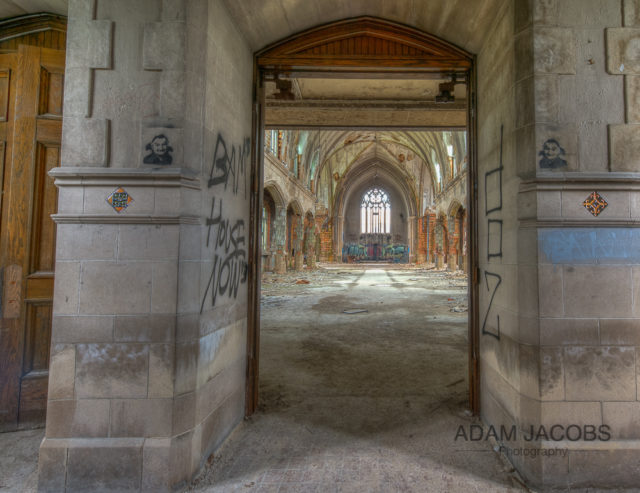 In September 1922, the construction of a Gothic-style church for 1,500 worshippers began with the ceremonial laying of the cornerstone.

It was completed in early 1924, and the church was consecrated on June 1 of the same year. By then, the surrounding area was densely populated.

After the church opened, it became popular among the locals and its congregation swiftly expanded. In 1964, when it celebrated its 50th year, the church served about 1,600 families.

It had grown so much that it now accommodated three priests and 22 nuns. There were also 180 students studying at the associated Catholic girl’s school.

In the second half of the 1960s, police raids took place on the streets of this district, and these raids caused terrible civil unrest. Tensions came to a head in 1967 when most of the buildings on the same street as the church were burned to the ground. The church of St. Agnes was relatively unaffected.

Church attendance began to decline as many residents left the city due to police raids and unrest. In the 1980s, the neighborhood could not recover from its losses and fell into poor condition. 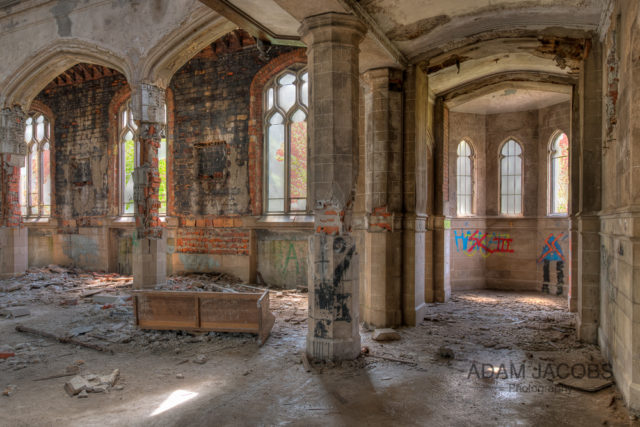 In 1986, only about 160 families attended the church but they were not enough to cover the high costs which were needed to operate such a large church. Aware of this issue, the church authorities began to take a number of measures to reduce costs and attract people.

For example, in 1989, the church merged with a nearby one and formed a new parish, which was named the Martyrs of Uganda in honor of African missionaries from 1887 who had refused to renounce their faith. The new name also reflected the racial makeup of the area.

In addition, Mother Theresa visited the church and held a seminar there in 1981 where she addressed thousands of people. She insisted that all the food which had been provided for the event should go to the poor.

However, despite outreach programs and other such measures, church attendance continued to decline. The school was closed in 2000, after which it was mostly used for storage, although some events still took place there.

Taking into account the declining numbers and the deterioration of the building itself, a decision was made to close the church. The last parish service took place inside St Agnes in June 2006. After that, the remaining 90 members of the church moved to the church of St. Cecilia.

The Detroit Diocese decided to put the building up for sale. Although it was purchased, the buyer neither took possession nor made any effort towards restoration. In 2007, the Archdiocese removed the pews and replaced the stained glass windows with plastic panels. 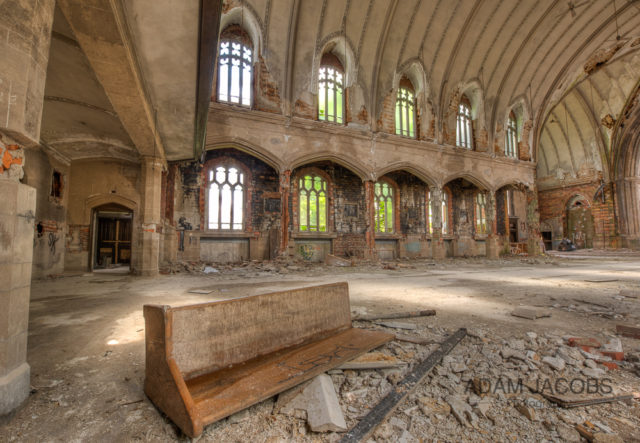 The derelict church was often visited by lovers of abandoned places, but some were less respectful than others. In 2009, organ pipes, as well as tiles from the columns and walls, were stolen. Since 2010, the damage caused by the weather and vandalism has become even more noticeable.

In 2012, a theater producer and real estate investor Scott Griffin purchased the abandoned church for $90,000.

The suggestion was that, at the time of purchase, he had no real plans of what to do with the building, he only wanted to stop vandalism and any encroachment.

It is reported that he is currently in talks with surrounding neighborhoods to see what the locals want doing with the building. In the meantime, he has secured the site so that access to the church is now prohibited, and fences have been installed around most of the building.

A huge thank you to Adam Jacobs, who is based in San Francisco, and his photography website for giving us permission to share his photographs. To see more of Adam’s Abandoned Spaces work and purchase prints, visit here. 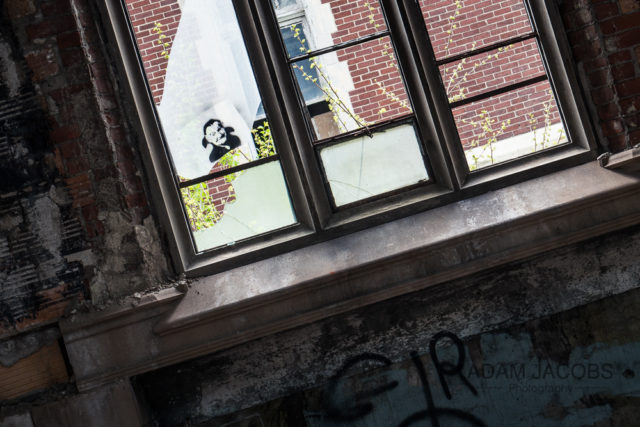 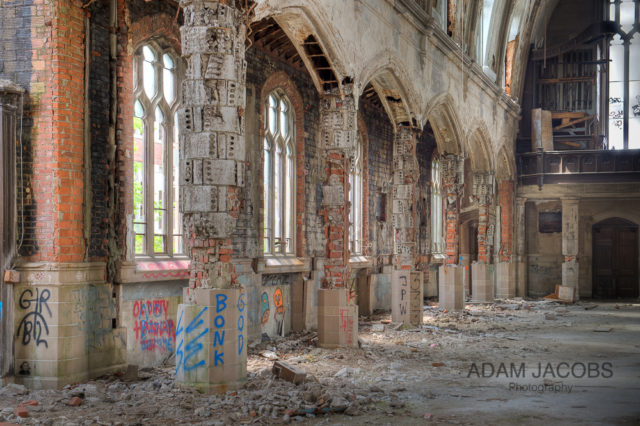 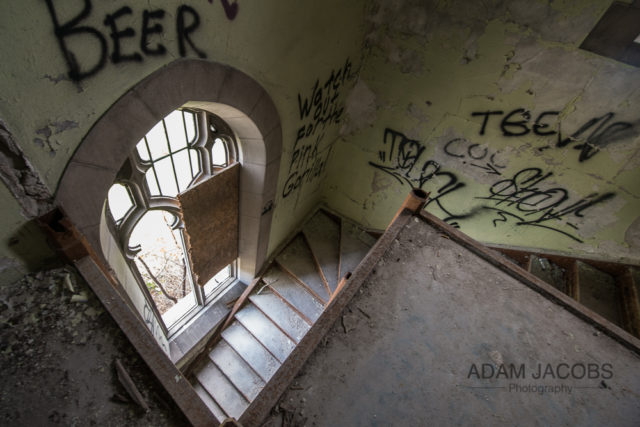 The stairs leading to the balcony.  Author: Adam Jacobs – AdamJacobsPhotography.com 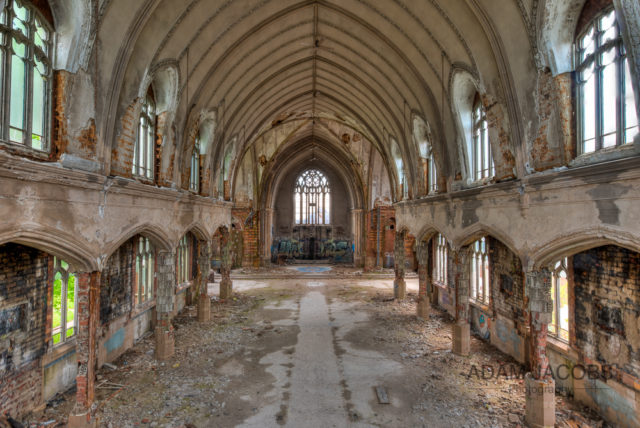 A view from the balcony. Author: Adam Jacobs – AdamJacobsPhotography.com