The ghost town of Two Guns, located in Coconino County, Arizona, USA, was developed as a popular tourist spot, offering travelers a stop along Route 66.

Part of the attraction of this place is a nearby hidden cave, which was the scene of a brutal event and is now considered to be cursed.

The story goes that a tribe of Apache Indians attacked and robbed two Navajo Indian camps along the Small Colorado River in 1878.

In retaliation, other members of the Navajo tribe sought out the Apache tribe and found them hiding in a cave within a ravine. The Navajos blocked the exit with wood and lit it.

The next day, when the fire had died down, the Navajos went inside, reclaimed what had been stolen from them, and left the place. Since then, local tribes avoided the cave, considering it cursed. 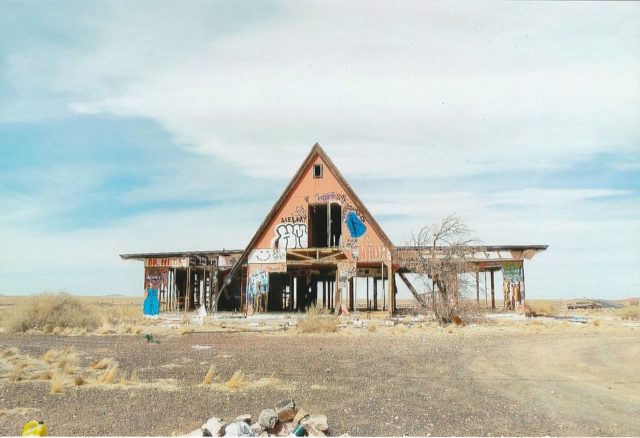 Before the city was founded as a settlement, construction had begun on the Santa Fe Railroad across northern Arizona. At the beginning of the 19th century, people began to settle in this area.

Two Guns was chosen as a suitable location because it offered a stop on the way to Diablo Canyon.

Various people chose to settle in this area and take advantage of the blossoming trade. Mr. and Mrs. Oldfield opened a modest trading post. Ed Randolph also settled there with the intention of building a store near to the infamous cave.

Perhaps the most enduring residents were Earl and Louise Cundiff. In 1922, the Cundiffs acquired 320 acres of land from Randolph for $1,000 on which they built a shop, restaurant, and gas pumps.

The town began to grow and this stop on Route 66 started becoming increasingly popular with tourists. 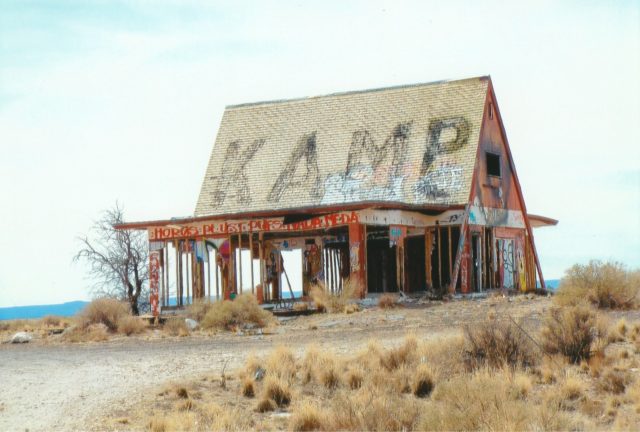 In 1925, Harry Miller saw the potential this place offered and rented land from the Cundiffs. Creating the persona of “Chief Crazy Thunder,” Miller wanted to capitalize on the tourists passing through the settlement.

His first step was to build a zoo, constructing the cages out of bricks and chicken wire. His zoo offered tourists the chance to see lions, cougars, lynx, birds, and snakes.

Miller also tried to exploit the nearby haunted cave. Taking advantage of its story, he installed electric lights so people could see better, built fake cave-dweller ruins, and even sold the skulls he found inside to tourists as souvenirs.

Miller set bright signs along the highway and decided to name his enterprise Fort Two Guns. He claimed that this was because he had previously worked with the silent movie actor William S. “Two Guns” Hart and wanted to name the place after him. The name stuck.

From an isolated trading post, Two Guns began to turn into a noisy stop for tourists who needed oil, food, and an overnight stay.

It is known that Cundiffs and Miller often had disagreements over the conditions of the ten-year lease that Cundiffs had granted the businessman. However, this tension came to a head when, in early 1926, these disputes led to a fatality – that of Earl Cundiff, during a heated argument with Miller who drew a gun on him.

Amazingly, Miller was later acquitted of the crime and was allowed to return to the town to continue his activities. 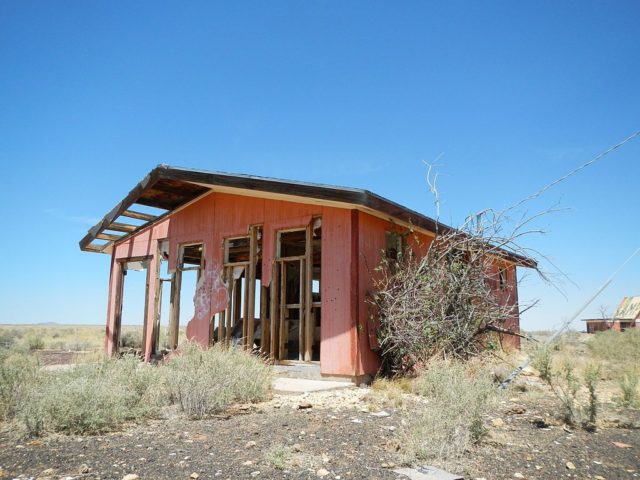 However, Miller’s days were numbered. In 1929 there was a severe fire at the trading post in Two Guns. Louise Cundiff, now a widow, tried to prove that she owned the land, but Miller claimed that it was his because he had settled before them.

This outrageous lie was eventually unmasked by the court which found in Louise’s favor. The land was returned to her, and in 1930, Miller left Two Guns forever.

In 1950, Two Guns was put up for sale. Over the next two decades, it was repeatedly leased and abandoned until 1969 when it was sold to Ben Dreher.

Dreher decided to restore and revitalize the area. He built a restaurant, souvenir shops, a Texaco gas station, and even gave the zoo a new lease of life. He later built a more modern Shell service station and a KOA campsite. 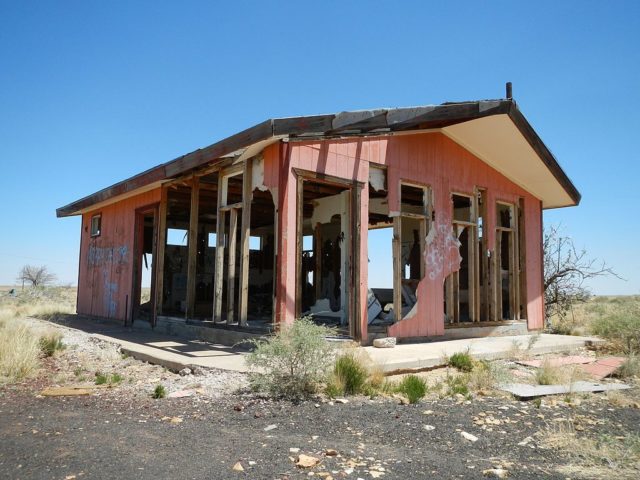 All seemed to be going well for Two Guns, and it even had its own dedicated exit ramp from Interstate 40. But tragedy struck in 1971 when a fire broke out in the service station and ravaged a great part of the town.

After that, the population in the area began to decline, as did the number of tourists. Eventually, even Dreher abandoned the town.

An attempt to revitalize the location was made by entrepreneur Howard Armstrong in 1992. But despite his best intentions, he suffered a stroke three years later, and his plans to update the tourist destination were never realized.

Currently, this place is considered an abandoned ghost town where visitors can find the preserved ruins of former residential dwellings, the zoo, and the burned-out service station. This once-bustling tourist town is now an attraction only for vandals and urban explorers. 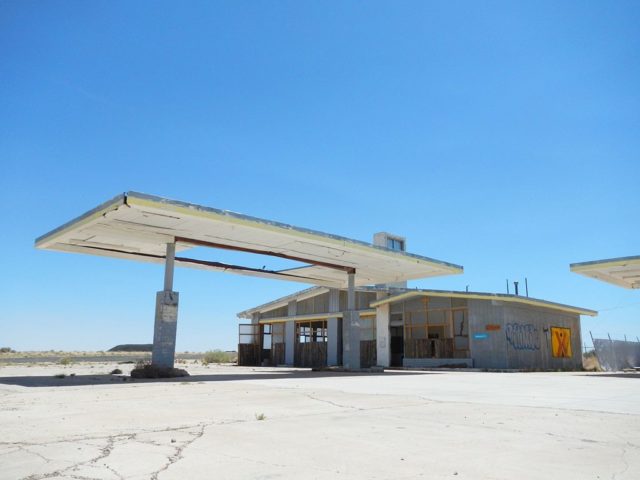 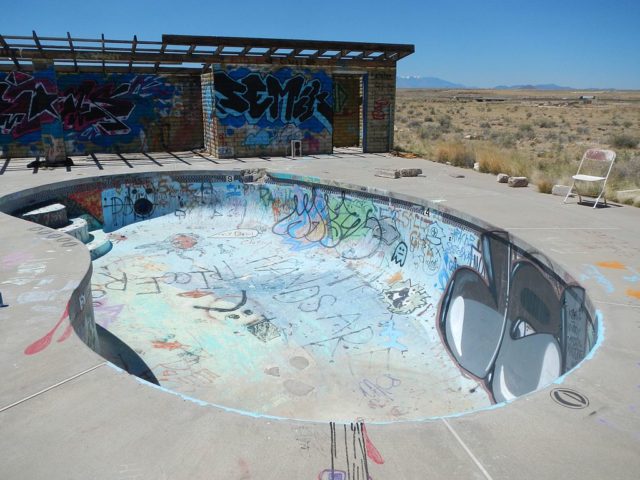 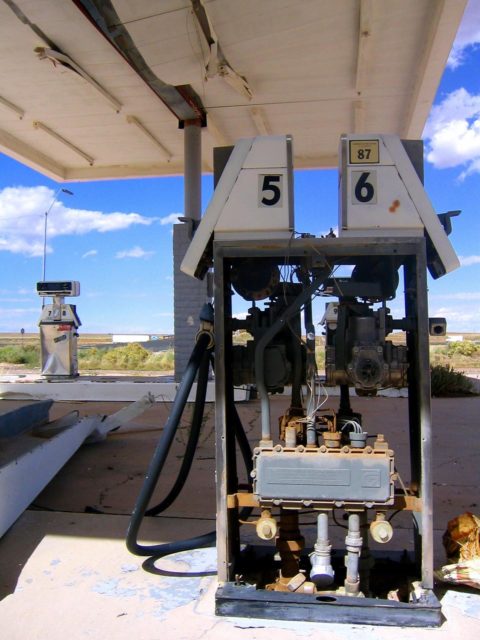 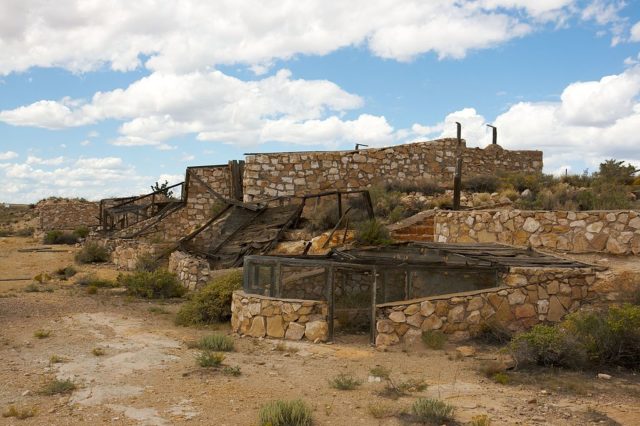 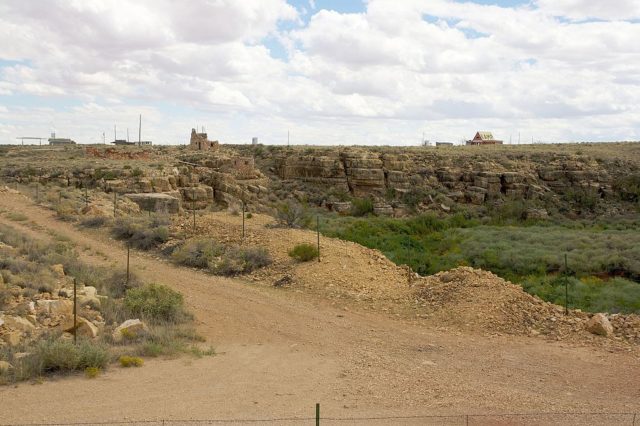 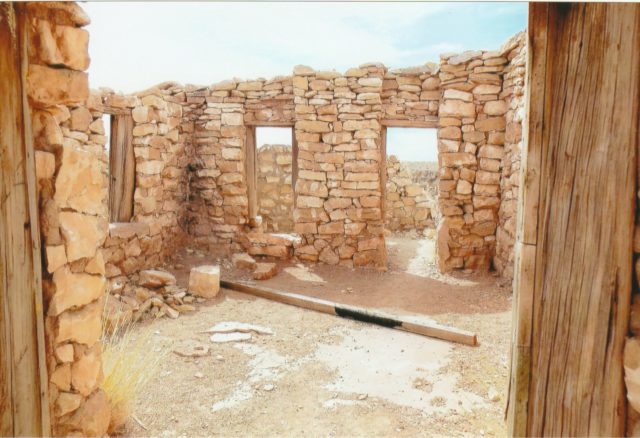 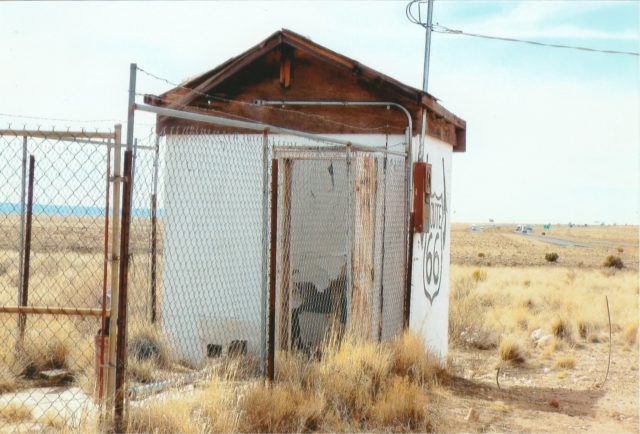 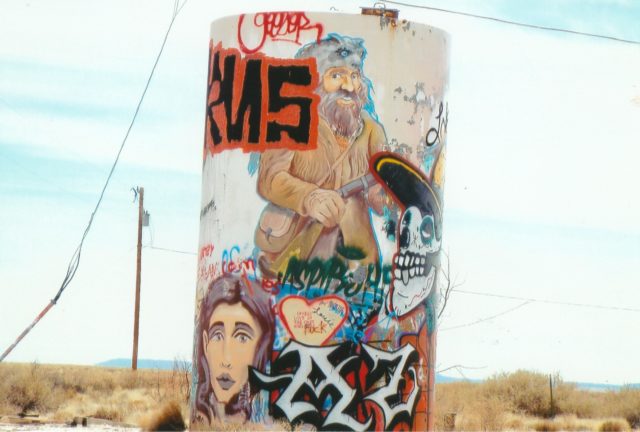 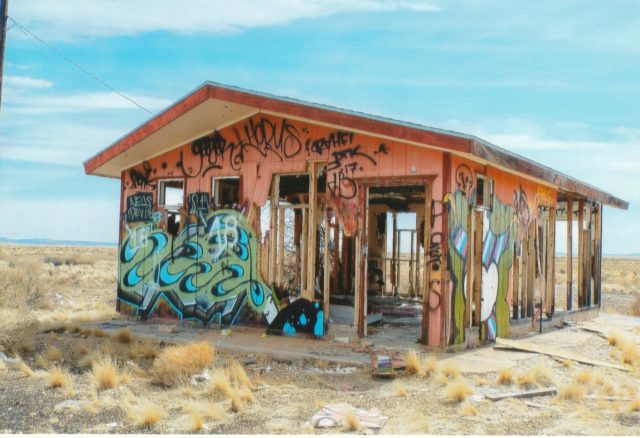 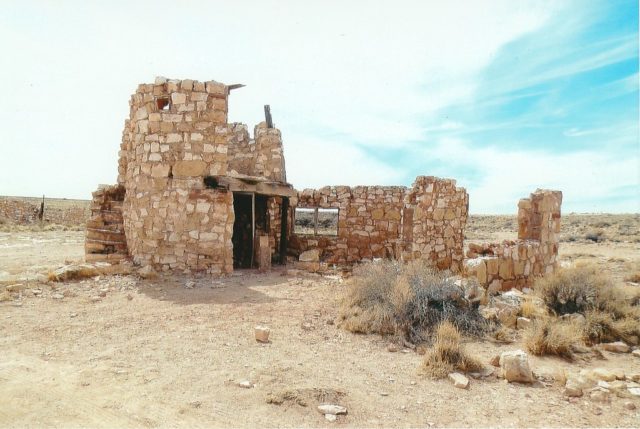 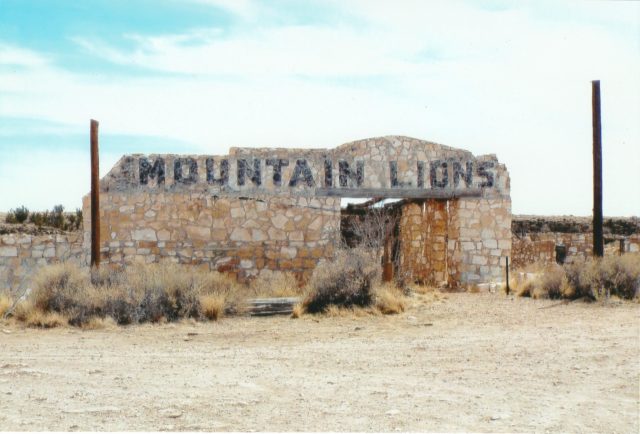 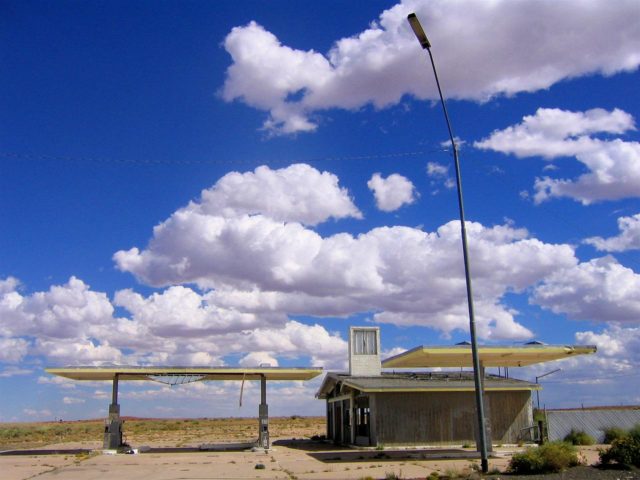 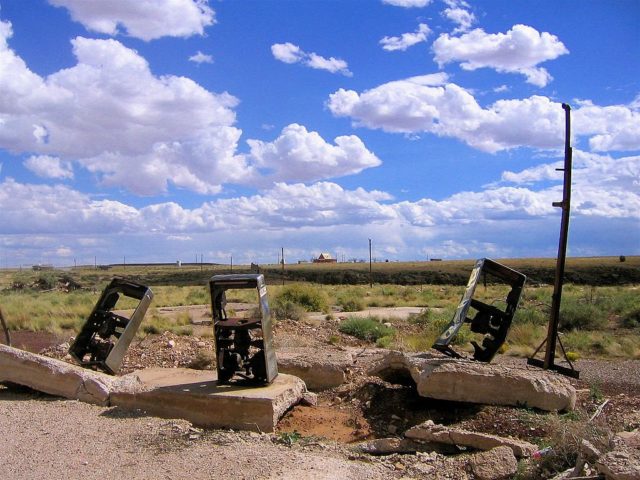 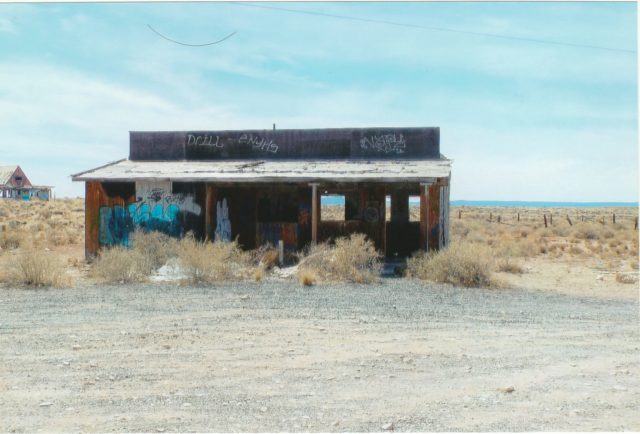 Another Article From Us: The Abandoned Arne’s Royal Hawaiian Motel 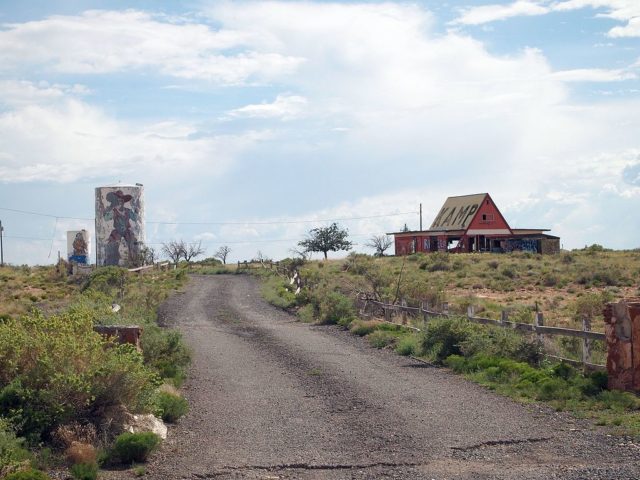